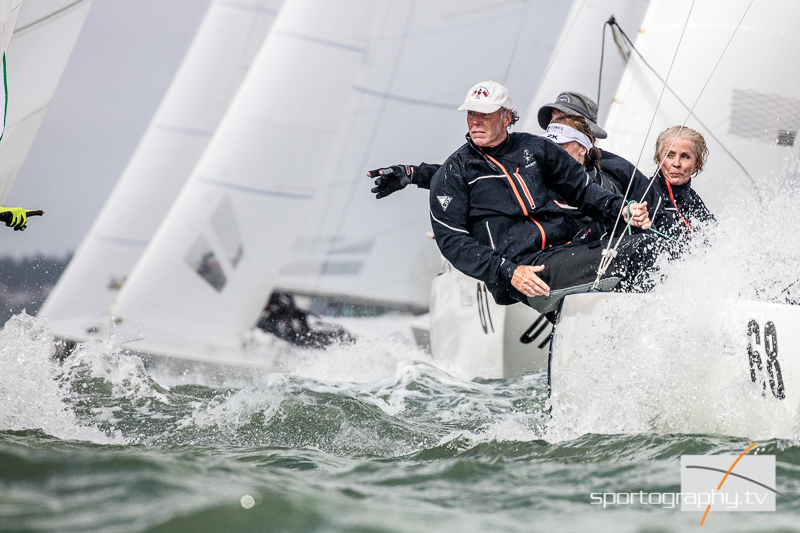 Jeanne-Claude Strong at the helm of Woolloomooloo

The wind was still in the upper range of 20+ knots, but a more southerly component produced gusty, shifting conditions. The wind came over the top of the Isle of Wight, accelerating across the Eastern Solent pumping shifts both left and right.

Getting off the start line, into clear air, has been paramount throughout this championship. However getting the wrong side of a big shift today, could and did, undo even the best start. Two races were completed, leaving one remaining race for the last day.

John Bertrand (AUS) is in pole position, but that lead has been eroded. Noel Drennan (AUS) momentarily took the overall lead, but ended the day 8 points behind Bertrand. Stephen Benjamin (USA), maintains third, but had another day with drama, with a man overboard who was recovered. Benjamin is 11 points off the lead. In this fleet anyone of the three top teams could have a shocker tomorrow, the 2016 Etchells World Championship is going to the wire.

In Race 8, Double Olympian, America's Cup helmsman and past Etchells World Champion, Andy Beadsworth, came off the line with power and speed, but it wasn't enough to win the race. Drennan and Smith both looked to be in the chocolates, but both got rolled downwind, as a shift favoured the chasing fleet. Drennan finished 18th,when a podium score looked likely, and Bertrand retained the overall lead.

Mark Thornburrow (AUS), representing the Royal Hong Kong Yacht Club, played the shifts well, and in the latter part of the race, covered brilliantly from the front to take the bullet. Beadsworth (GBR), representing Warsash Sailing Club was 2nd. James Badenach (AUS), representing the Royal Hong Kong Yacht Club, scored the first podium finish of the campaign, to end the day on a high. Badenach's team are almost assured of taking the Corinthian Prize, but will be looking to break into the top ten overall tomorrow.

Cowes Yacht Haven was overflowing with Etchells sailors after racing, with free beer provided by the Royal Ocean Racing Club. The Etchells Class is close to fifty years old, but the future is in its youth. Scott Kaufman, representing the Shelter Island Yacht Club, has been racing Etchells for years, but his crew are all under 30. Jesse Kirkland represented Bermuda in the 49er at the 2012 Olympics. Lucas Calabrese is just back from the Rio Olympic Games, where he won the bronze medal in the 470 for Argentina. Austen Andersen is the youngest of Kaufman's crew, a highly talented Hobart College sailor and coach from New York State.

“The future of the Etchells Class is the youth sailors.” commented Scot.” I am sailing with great young sailors, two of them are Olympians, and you see other young sailors at the worlds. This is where this class needs to be going; promoting the young teams, that is where the growth will come from. I hope that during this world championship, we can move up as a team, tighten up as a group, and get ready for the next major event, which will be the 2017 Etchells Worlds in San Francisco. We are sailing better than we did in Newport for the 2014 Worlds and winning a race here was really special. To win at the highest possible level, you have to put it all together, and do that all of the time.”

Past World Champion and Olympic Match Racing helm, Lucy MacGregor, is one of Britain's most successful sailors, and currently competing in the Nacra 17, high performance catamaran. Lucy is one of over a dozen women, competing at the Etchells World Championship. “The Etchells is very different to racing a Nacra 17, but very similar to Match Racing boats, so I have been getting the notes out from four years ago.” commented Lucy MacGregor. “It is good to refresh your memory and it's a bit like riding a bike. Our team has competed at loads of Etchells events in Cowes this summer and it has been a lot of fun, especially the worlds, with so many talented sailors here from all over the world.”