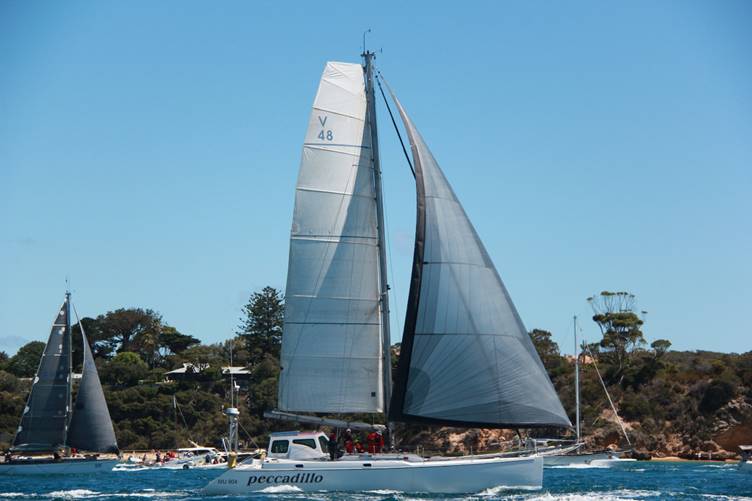 Peccadillo shortly after the start near Portsea

PECCADILLO (Charles Meredith) crossed the finish line at the mouth of the Mersey River Devonport at 2:17:03 this morning to take Line Honours in the blue-water classic Melbourne to Devonport ocean yacht race.

2015 marks the 108th anniversary of the Rudder Cup which is awarded to handicap winner in the Premier Measurement Division, which this year is the Australian Measurement System (AMS). Results for the Rudder Cup perpetual trophy will be known soon.

When PECCADILLO competed in the 2014 race, it was the first time in many years that we’ve had a multihull in the fleet.  Owner/Skipper Charles Meredith is the Commodore of Multihull Yacht Club of Victoria and has been collaborating with the Ocean Racing Club of Victoria for many years to increase participation of multihulls in offshore events.

Although conditions for the “Paddock” (Bass Strait) crossing have been very sedate this year, crews worked exceptionally hard to keep the yachts moving, and maintaining a very watchful eye searching for more wind, as little puffs of breeze can make a huge difference in light winds.

PECCADILLO led the fleet out of Port Phillip Bay but didn’t have it all their own way in the light conditions.  TEVAKE II was never more than a few miles away.  The two Line Honours leaders sailed into a windless hole yesterday afternoon, which enabled the fleet behind them to catch up and both PECCADILLO and TEVAKE II were passed by MERION.  When the wind came back last night, it was around 10 knots from the North East, which made for ideal running conditions and PECCADILLO put their foot down to re-take the Line Honours lead.

After the first three yachts crossed the line, unfortunately a little more frustration for the remaining fleet as the breeze abated again and the tide turned to flow out of the Mersey River which will also impeded their progress to the finish line.