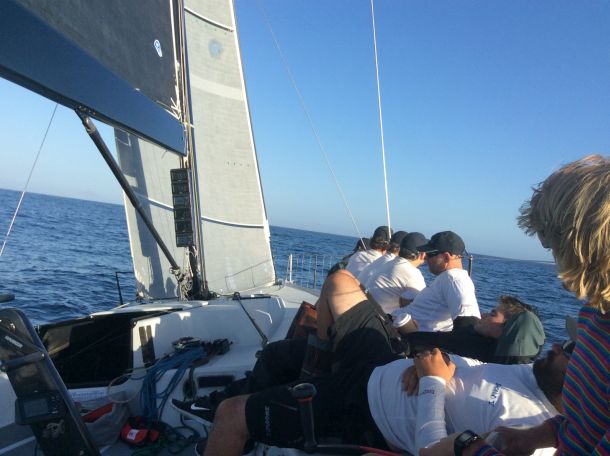 Promised nor’east winds have so far failed to materialise and line honours in one of the slower Club Marine Pittwater to Coffs Yacht Races in history will be decided sometime late this afternoon or evening. Sean Langman’s giant trimaran Team Australia has 96 nautical miles to go and based on its current 3 knots of speed won’t complete the 226 nautical mile course that began from Broken Bay yesterday afternoon until late tonight, Saturday January 3, 2015.

The multihull’s crew has fingers crossed that the promised strong sea breezes will finally replace the glassy conditions.

Hearing reports from on water and looking out at the finish line at Coffs Harbour it’s hard to fathom there’s a strong wind warning in place for the south Macquarie Coast. North-easterly winds 15-25 knots reaching up to 30 knots during the afternoon and evening are forecast.

It’s not quite food rations but flight bookings home may be an issue and the jokes are wearing a little thin on board a few in the now 27 boat fleet following the retirement of Patrice Six due to time constraints. This is the time when mental aptitude and patience levels produce eventual trophy winners.

Team Australia navigator Josh Alexander says, “Most of the crew are asleep on the nets or bored. It’s looking like a long morning till the wind, at maybe midday me thinks.”

Rob Hanna’s TP52 Shogun V crew, who were third on handicap under the IRC and ORCi rating systems earlier this morning, are also well rested and ready to take on the day says navigator Ross Vickers.

When a modern tricked-up 80-footer like Karl Kwok’s Beau Geste slows to 5 knots, things are grim.

“It's midnight and we are still struggling to find breeze and get any real pace on – and we aren't alone with this problem either,” posted a crewman overnight.

At 0400hrs this morning Team Australia and the leading monohull yacht, Beau Geste, picked up the pace to 12 knots then ran out of wind and momentum once again in what has been dubbed “a drifter” of a race.

Fleet back marker Out of Sight is yet to pass Newcastle and has 181 odd nautical miles to go, inching along at 2.1 knots this morning at 0700hrs.

The first race retirement, at 0817hrs this morning, came from Shaun Lane’s X-Yacht 41 Patrice Six due to time constraints. “We are sailing from one hole into another,” said Lane, now motoring with the crew back to Pittwater.

At 0800hrs Julien Farren-Price’s Cookson 12 About Time was leading on IRC and ORCi handicap. Sandor Tornai’s Farr 55 Espresso Forte was lead PHS boat, the crew’s performance motivated after being forced to drink black coffee given ‘someone’ forgot to pack the milk. Full current standings.

Light conditions are the result of a strengthening high pressure system over the Tasman Sea extending a ridge towards the northern New South Wales coast, while a trough over central parts of the coast is weakening.