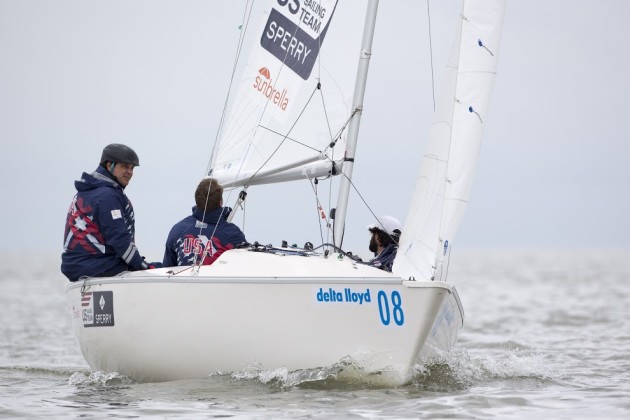 Patience was the essential ingredient on the second day of the 2016 Delta Lloyd Regatta in Medemblik, Netherlands, which incorporates the 2016 Para Sailing World Championships. Light and tricky winds lasted all day, testing race officials and sailors alike, with most fleets delayed at some point. The IJsselmeer was in stark contrast to Tuesday's strong winds and in most fleets created some different winners.

In the Sonar class, the American team of Alphonsus Doerr/Hugh Freund/Brad Kendell (USA) picked up an unexpected win in the second race of the day after the Canadians were judged over the line. Following a third in the first race of the day this was enough to take the overall lead from British hands. John Robertson/Hannah Stodel/Stephen Thomas (GBR) picked up two seventh places to drop to second. Two second places for the German team of Lasse Klotzing/Jens Kroker/Siegmund Mainka (GER) was enough to move up to third. The first race of the day was won by the Israeli boat sailed by Dror Cohen/Arnon Efrati/Shimon Ben Yaacov (ISR).

Doerr was delighted to be leading what he described as “a very tough fleet.”

“I think the hard part today was knowing where the pressure was and sailing to the pressure, and there were a lot of shifts with that. It was hard to know exactly what phase you were in but we did a good job positioning ourself around boats so we wouldn't lose. It paid dividends today to stay conservative. The puffs were hard to see. Sometimes they would only hit at the last minute. You would only see them and react late. It took a lot of patience.”

Kendell added, “We had two good starts, which helped us out. We’ve been focusing on our starting technique for months now. We also were very aggressive in our weight placement and boat handling, with Hugh and I moving around constantly.”

Monika Gibes/Piotr Cichocki (POL) have taken the lead in the SKUD18 class, after a first and second places, from yesterday's leaders Alexandra Rickham/Nikki Birrell (GBR). John Mcroberts/Jackie Grey (CAN) move up to third. As an Olympic selection event for the Americans, Sarah Skeels/Cindy Walker (USA) had a better day again than Ryan Porteous/Maureen Mckinnon (USA) to hold a significant points lead. Skeels said, “We had some frustration today because we were winning the first race, which was cancelled. After that, it was hard to stay on track, since the breeze kept petering out.”

In the 2.4 Norlin OD class Damien Seguin (FRA) extended his lead to eight points, and won the day on points, but when the discard comes in after one more race the top of the leaderboard will be much closer with several sailors picking up high scores today. Matt Bugg (AUS) is second with race four winner Heiko Kruger (GER) in third.

In the Olympic classes, Diego Botin/Iago Lopez Maria (ESP) maintains control of the 49er fleet, after recovering from a 14th in the opening race of the day to score two third places and take a 10 point lead at the top. Most of the fleet were having problems keeping it consistent, but for Botin and Lopez, winning here almost certainly means a ticket to Rio.

“This is the Olympic trials for us. For sure we are in a really good spot so far overall, but we have to keep going, keep sailing as well as we can and we will see.”

“In the morning the forecast was pretty bad with light winds. In the first race we got a bad start and could only finish 14th, but then we got two third places, so we are really happy with that. For sure we love the days like yesterday with a lot of breeze but over the last couple of months we are improving a lot in light winds so we are prepared.”

After six races they hold a 12 point lead over their nearest rivals in the selection trials, Carlos Paz Blanco/Anton Paz (ESP), who are in fourth place overall.

In the 470 Simon Sivitz Kosuta/Jas Farneti (ITA) continued their run of first places while Jeemin Ha (KOR) opened the day with a win in the Laser class, with Rutger van Schaardenburg (NED) winning the second. Ha continues to lead the regatta. In the Laser Radial, Marit Bouwmeester extended her lead to 15 points, but didn't have it her own way, with the race wins going to second placed Svenja Weger (GER) and third placed Manami Doi (JPN).

Bouwmeester explained the day, “It was completely different today. Waves and much wind on Tuesday, calm water and no wind today. But they managed to get two races in, so that's good.”

On her upcoming schedule she said, “I've been training the last weeks on the coast at Scheveningen with the other Dutch girls. That was good, and next week we leave for the World Cup in Weymouth. I need the competition. We will also visit Rio again and after that I'm going to rest until we leave for the Olympics. I've done all the work I had to do to compete well in Rio.”

The RS-X classes had the longest wait of all the classes and were the only class not to get in the full schedule with only two out of the three races sailed. Dorian van Rijsselberghe (NED) has now built a 14 point lead in the men's class. The women didn't actually start racing until after 18.00 having waited around all day. Peina Chen (CHN) took the first race and Maria Mollestad (NOR) the second, but Maja Dziarnowska (POL) continues to lead the fleet.

The forecast for Thursday morning in Medemblik looks even lighter than today, though wind is expected to build through the afternoon. On Thursday, the Olympic and Paralympic classes will be joined by the Moth class on the IJsselmeer.

Racing at the Delta Lloyd Regatta in Medemblik continues to Saturday, when the Olympic classes here will sail their medal races and the Paralympic classes with conclude their world championship. The races can be followed live through the event website www.deltalloydregatta.org.