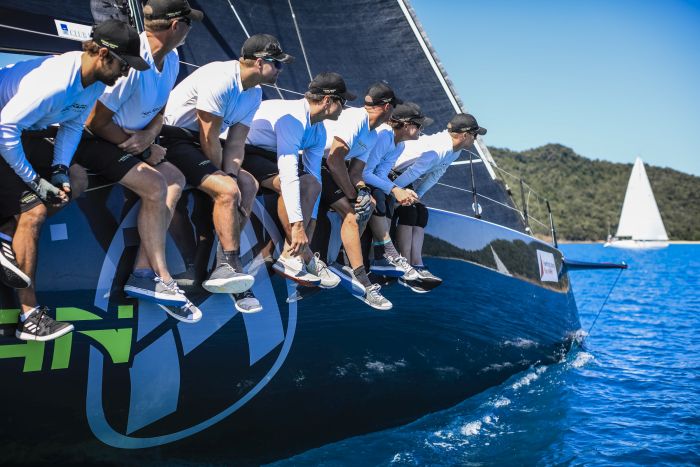 All divisions completed round-the-island courses in patchy light sou’east breezes that created a few park-ups, and opportunities to break away from those caught in a wind shadow, eddy, or up against an unfavourable tide. Similar conditions are forecast for Monday then Tuesday morning the effects of a fast-moving trough will be felt in north Queensland waters, dialling up significant breeze for Race Week day three.

Day one sailing highlights thanks to Broadkast

Derek Sheppard and his brother Martin, who long campaigned offshore with their Beneteau 45 Black Sheep, bought an Elliott 780 trailable of the same name and are now enjoying regatta sailing with much less effort.

“We chose the biggest boat that we could tow that didn’t need permits and the likes. We also wanted something with a bit of freeboard that could deal with the heavier weather,” said Sheppard after a good light airs start to Race Week with a line honours and handicap win in the Trailable Yachts Class. “We’re sailing Airlie Beach, Hamilton Island and Magnetic Island with three different crews. On the Beneteau that would have taken 50 people!” the skipper added.

Three hulls proved less sticky than two in the lights airs with Karl Kwok’s MOD70 trimaran, helmed by Gavin Brady, winning race one on corrected time ahead of Alex Toomey’s Extreme 40 Deepwater Collective, one of four Extreme 40s in the division.

This year is Hooligan navigator Will Oxley’s 22nd Hamilton Island Race Week, and the international yachtsman still appreciates the beauty. “It’s wonderful to be in the Whitsundays for my 22nd Race Week, and the pretty horrendous weather down south emphasises how good it is here,” Oxley said. Looking ahead, he expects Tuesday to be the regatta’s windiest day, up to 30 knots before conditions ease over the second half of the six-day pointscore that wraps-up on Saturday August 24.

The forecast for Monday August 19 is similar to Sunday in terms of wind strength, S-SE tending SE-NE at 8-10 knots from late morning.