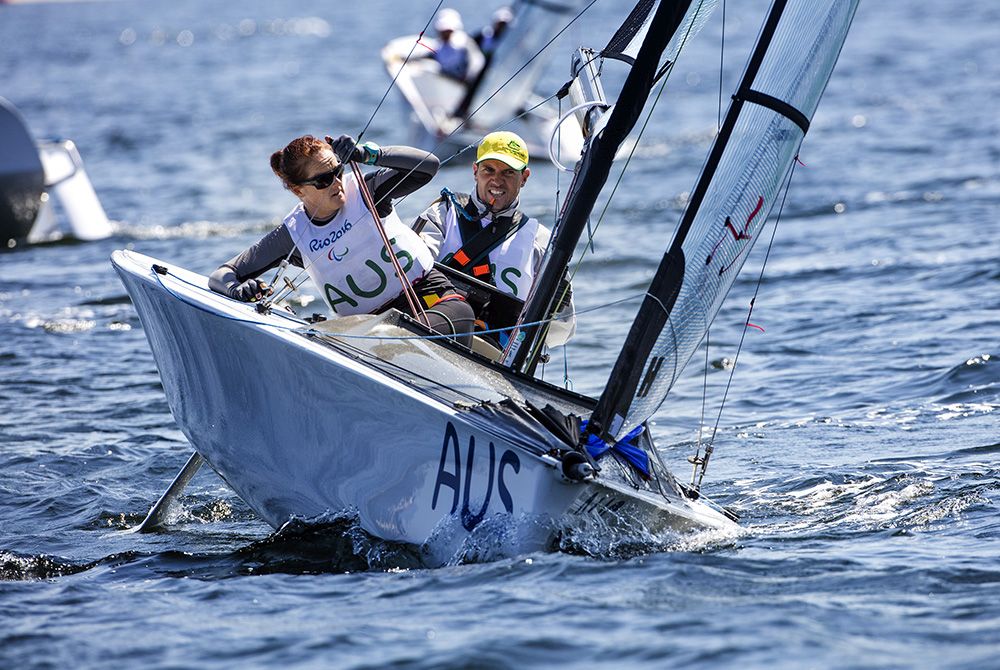 In the build-up to the Rio 2016 Paralympic Sailing Competition the sky has been a dull shade of grey, but the minute the first day of racing started, the stereotypical Rio de Janeiro sunshine came out with a 10 knot wind to boot. It was a glorious opening session of sailing.

And it wasn't just the elements that delivered either as current Paralympic champions continued where they left off from London 2012, leading their respective fleets. Great Britain's Helena Lucas in the 2.4 Norlin OD, Australia in the SKUD18 and with the previous gold medallists absent, it was the Australian team who looked to fill the void early on in the Sonar.

The day began with a moment of reflection as Technical Delegate David Staley led a moment of silence for Ian Harrison MBE who passed away in late August, and quite fittingly a Memorial Service was held in his Great British home county on the same day as the Paralympic sailing begun.

A pioneer of disabled sailing, Harrison was key to the sport being accepted as a Paralympic medal sport in 2000 and was also the Technical Delegate for that first Paralympic Sailing Competition in Sydney.

In the hotly contested 2.4 Norlin OD class the pre-Games favourites all justified their tags with a bunched top six, but it is current Paralympic champion, Great Britain's Helena Lucas, who has edged in front with an impressive first race win and second placed finish on the Pao de Acucar (Sugarloaf Mountain) race area to end the day on three points.

Obviously happy with the start, which may have been worrying the Briton, Lucas commented, “It's always good to have a good start you know. In the few regattas leading up to this I've not had a very good start then you're always playing catch up the rest of the week. So you know it's great because it gives you a good confidence boost and a good platform to carry on the rest of the week.”

Relief then turned to talk of some Rio fun and games, “It was tricky, especially the second race. The first race was a little bit easier for me because I managed to get my nose out in front from the word go and had a little bit more breathing space. But the second race was an absolute fight,” expressed Lucas.

“I think there was six of us just fighting like crazy for second place. It was snakes and ladders the whole time. Luckily I finished on a ladder not a snake. It was really close racing.”

In the 'easier' first race Lucas led at every mark followed closely behind by world champion, Germany's Heiko Kroeger, who seemed to be one step behind the Briton all day. Even when Lucas finished in second in race two the big German came home in third. Kroeger does however sit in second overall on five points for his opening day efforts.

Taking the second bullet of the day was USA's Dee Smith. Smith made up for a disappointing seventh place in race one to take the win as he led the fleet at every mark, leaving everyone else to fight it out behind him. Smith sits in third overall on eight points, but does tie on points with Australia's Matt Bugg who scored a 3,5 for the day.

France's Damien Seguin sits in fifth on the leaderboard with nine points and is just ahead of Norway's Bjornar Erikstad on 11. From there, a small gap has opened up over the rest of the fleet with Italy's Antonio Squizzato the next best on 16 points.

The champions continued to reign as Australia's Daniel Fitzgibbon and Liesl Tesch lead the SKUD18 fleet. Sailing on the Pao de Acucar (Sugarloaf Mountain) race area they took a bullet and a second place to sit top of the leaderboard on three points.

Race one was a statement of intent from the Paralympic champions as they led at every mark. They narrowly missed out on a perfect day due to a determined Canadian team of John McRoberts and Jackie Gay who kept the Aussies at bay in race two to take the win by just four seconds ahead of their rivals.

Despite the good start, the first thing Fitzgibbon talked about was the opening day weather, “First day and we couldn't do much better with the weather, it was really warm, good winds and finally got everything out of the way and were racing.”

Racing has definitely begun for the London 2012 champions, and that title could put more pressure on the team to perform, but Fitzgibbon would disagree, “I don't think we have pressure on us but if we sail well we know we will be competitive so what happens, happens and we are just happy to be out here. We're just going to just give it a go and put pressure on and see who can handle it.”

For partner Tesch, she looked at pressure in a different way and is maybe throwing a few mind games in to the mix, “I think we tactically threw the [2016] world championships so that we wouldn't feel the pressure, so we were comfy as ever coming in here.”

Even with a regatta to concentrate on, it is sometimes hard to forget exactly where the Games is taking place, and it certainly evokes some emotion in Tesch, “The most exciting thing is having to tell Dan where the boats are when we are in certain positions and turning around and saying 'They're just under the Sugarloaf' or 'they're just under Christ' that's quite exciting.”

Among the excitement, it is McRoberts and Gay who sit in second on the leaderboard with six points as they finished fifth in the opening bout to complement their bullet. Equal on points are the current world champions, Poland's Monika Gibes and Piotr Cichocki.

The Polish team took their first world title in the lead up to Rio 2016 with a very consistent scoreline in Medemblik, the Netherlands. With two third place finishes it looks like more of the same, but with Fitzgibbon and Tesch coming out of the blocks hard early on, the Polish team will need to take some bullets to keep up their hunt for Paralympic gold.

Rounding out the top five from day one are Marco Gualandris and Marta Zanetti (ITA) in fourth on seven points and Alexandra Rickham and Niki Birrell (GBR) in fifth on eight points. The day could have actually been a lot worse for the British team but they did well to drag themselves up the fleet in race two after taking some penalty turns to keep themselves in contention in the overall competition.

With compatriot Matt Bugg going well in the 2.4 Norlin OD and the SKUD18 team leading the way in their fleet, it was down to Colin Harrison, Russell Boaden and Jonathan Harris to carry the baton for Australia in the Sonar to end a good day for the land down under.

The Australians led at every mark on the Escola Naval race area in race one to take the bullet and followed it up with a second place to sit on top of the leaderboard with three points.

Explaining the key to success for his team, Harrison said, “It was about getting a clear lane early, focusing on boat speed and then just working the shifts. It wasn't tough in that they were huge shifts but there was enough pressure and you had to be on the right side of it.”

Even with the good start, Harrison knows the battle for gold won't be an easy one with top competition to deal with as well as difficult race areas, “It's very challenging racing in Rio, out of all the venues we have sailed around the world in the Sailing World Cup series, Rio is the most challenging.”

Recovering from an eighth place in race one, Trans-Tasman neighbours, New Zealand's Richard Dodson, Andrew May and Chris Sharp, came back with a bullet in race two to move up to second overall on nine points.

New Zealand may be the second name on the leaderboard, but they sit on the same points as Vasilis Christoforou, Anargyros Notaroglou and Thodoris Alexas (GRE) who scored a 3,6 and Lasse Klötzing, Siegmund Mainka and Jens Kroker (GER) who scored a 4,5.

World champions, USA's Alphonsus Doerr, Hugh Freund and Bradley Kendell have ten points which leaves them in sixth overall while Canada's Paul Tingley, Logan Campbell and Scott Lutes are above them in fifth on the same points tally.

Racing continues on Tuesday 13 September with two races scheduled for all fleets. There will be a switch in the race areas as the 2.4 Norlin OD and SKUD18 race on the Escola Naval area and Sonar's move to the Pao de Acucar (Sugarloaf Mountain) race area.