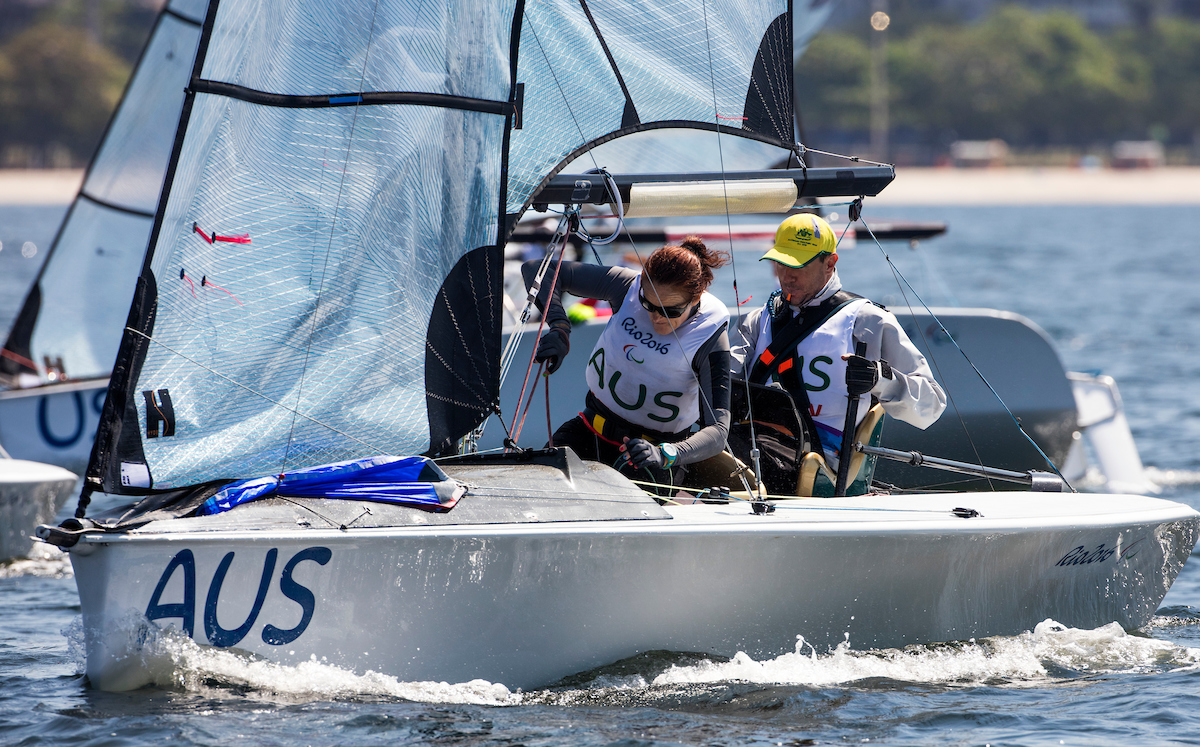 The unpredictable nature of sailing reared its head in Guanabara Bay on day two of the Rio 2016 Paralympic Sailing Competition as only one race apiece was completed for the Two Person and Three Person Keelboats.

A wait onshore was all the morning could offer for the expectant sailors as the wind took its time to materialize for suitable racing conditions. Although, there are worse places to wait onshore because in Rio, sailors are surrounded by the stunning backdrop to admire.

With a delayed start, time was not on the Race Committee's side to complete a full schedule, and there were further setbacks when the One Person Keelboat (2.4 Norlin OD) fleet were forced to abandon mid race.

In the only race of the day for the Sonars, the Canadian team, led by Beijing 2008 2.4 gold medallist Paul Tingley, held on for a very tight win after a good start. Only two seconds separated the top three on the Pao de Acucar (Sugarloaf Mountain) race area.

Australia's Colin Harrison, Russell Boaden and Jonathan Harris remain top of the leaderboard on eight points with a fifth placed finish to add to their impressive first day. Day two, however, belonged to Canada's Tingley, Logan Campbell and Scott Lutes who move up to second place on 11 points with the only bullet on offer.

Waiting for the wind is not uncommon in sailing and sailors have their own way of dealing with the wait.  For Canadian helm Tingley, he seemed to be enjoying the onshore facilities available to him before the Race Committee sent the fleet afloat, “It was a hot day at 37 degrees with the wind from the north. We were postponed so we were getting some cool A/C in the lounge. Then they decided to send us out as the wind was not going to change from the north, a direction which is very uncommon, so no sea breeze.”

Despite moving out of the comfort of the cool air, the early movement to the water from Tingley and crew paid dividends, “We were first onto the water and started to do our homework which helped us get a jump on the competition. The wind was a little right and then a little left, but we managed to get the first right shift to lead the race. Towards the end of race it flipped to the right and we had to change our game plan. With a couple of gybes towards the finish we came out on top by a nose.”

Whether or not it's the race win talking, Tingley seems to be enjoying what the first South American Games has to offer, “We love Rio so far. It's very variable, light winds and currents, you need to be always changing gears. I really like that 'thinking' type of racing. It's not just a one-way simple track, you must play the shifts and play snakes and ladders.”

Falling behind from the start, Norway's Aleksander Wang-Hansen, Marie Solberg and Per Eugen Kristiansen rounded the first mark in seventh overall, but the London 2012 bronze medallists are made of sterner stuff.

They pulled the race back in to their grasp to take the lead and were arguably favourites to push on for the win, but their progress was halted by a gybe which let their rivals back in. They lost out to Canada by just one second and sit sixth overall on 17 points.

Wang-Hansen explained the Norwegians day through his eyes, “It was a shifty, patchy, gusty day. Really tricky. We had a great start, but things didn't roll our way on the first upwind. But then we caught up a lot on the next two legs to be leading into the finish. We were certain that we were first, but we see now on the results that Canada just beat us.”

Just one second off Norway in the single race of the day were Vasilis Christoforou, Anargyros Notaroglou and Thodoris Alexas (GRE) who not only got third in the race, but mirror that on the leaderboard where they sit on 12 points.

A story possibly developing in the Sonar fleet is the 'curse' of the world champions. France (twice), Great Britain and USA are all world champions in the quad, but relatively slow starts on day one, backed up with mid to low placed finishes on day two means the highest positioned world champions are Alphonsus Doerr, Hugh Freund and Bradley Kendell (USA) in seventh overall. But a World Championship title isn't won by giving up or taking the bad to heart, so watch out in the next few race days for possible leaderboard climbers.

London 2012 gold medallists, Australia's Daniel Fitzgibbon and Liesl Tesch, just seem to be in the mood for another SKUD18 Paralympic gold medal. It was another dominant performance by the pair as they led at every mark to take the bullet on the Escola Naval race course.

The win today, and the great start on day one, has not gone unnoticed by the fleet, especially Canada's Jackie Gay, “They looked so fast and sleak today. They just had some wheels underneath them. They didn't really have anyone to fight. They were just out there in front. They came off the line with wheels. Dan [Fitzgibbon] is a really smart sailor and made some good decisions and just extended.”

Being out in front, it looks like the Aussies are the team to beat, but can they be beaten? Gay certainly thinks, knows so, “Nobody is unbeatable. We beat them [in race two],” laughed Gay, “but they are looking very good, there is no question about that.”

Concentrating on her own day with partner John McRoberts, Gay said, “Well it was tricky, obviously light and lots of current. It was heads out the boat and keep an eye of what's going on and try and sail as fast as you can.

“We had a decent start about half way down the line so we were okay, but then the wind went a little bit to the right so the Polish gained on the inside of us.”

Poland's Monika Gibes and Piotr Cichocki continued to push once they passed Gay and McRoberts to finish in second, a position that will help them up the leaderboard as a protest late on day one wiped off a third from their overall score.

With Australia blazing a trail in front, and Poland in second, it was down to the Canadians to hold off the rest of the fleet. It wasn't easy, but it was fun as Gay explains, “We had a little scrap with the Brits on the way down and that was fun. We won the scrap, coming in third. It was really fun racing.”

Fitzgibbon and Tesch sit in first on four points after three races. McRoberts and Gay are in second with nine points, while the team they did battle with, Great Britain's Alexandra Rickham and Niki Birrell, are third with 11 points.

Although racing began on the Escola Naval course for the 2.4 Norlin OD, the race was abandoned due to the first mark time limit not being met.

Giving his thoughts for the day, France's Damien Seguin explained, “No racing today for us. The first upwind was too long. 25 minutes was just too long for us to reach the first mark so we abandoned.”

The 25 minutes Seguin refers to is the time limit in which the boats need to reach the first mark, a time limit which the conditions just wouldn't allow today, no matter how much they tried.

With a wait onshore for all the sailors, Seguin explains what goes through their heads as the time ticks on, “It is difficult. Especially today. It was very hot outside so we just have to keep calm and focus. But this is our job you know, we get used to it.”

With no racing, the day one leader board remains unchanged with Great Britain's Helena Lucas on top with three points, Germany's Heiko Kroeger second on five with Dee Smith (USA) in third and Matt Bugg (AUS) fourth on eight points.

Briton Lucas will be the most relieved sailor heading back in after the abandonment as she was looking to be heading backwards down the field. Now she will get a chance to put that right when racing continues tomorrow.

Sailing will continue at the Rio 2016 Paralympic Sailing Competition on Wednesday 14 September with three races scheduled at the earlier time of 12:00 local time to catch up on the missed races from day two.