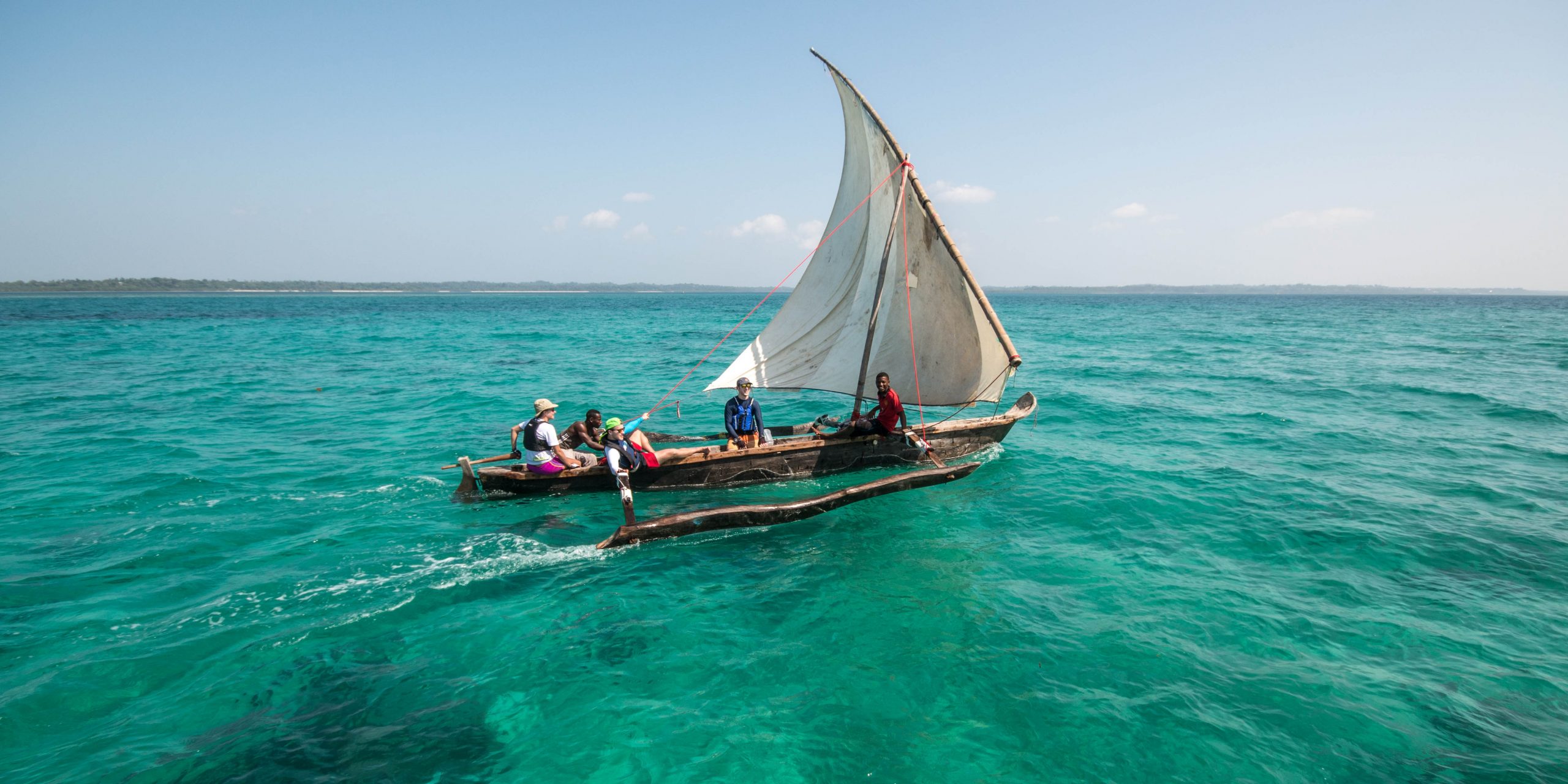 Whether you sail a one man Laser or a 90 foot catamaran, the chances are you’ll be benefiting from modern technology, from glass reinforced plastic hulls to the latest carbon fibre sails.

Strip this tech away however and how would you fare with only your sailing skills and the most rudimentary of boats?

The Adventurists are offering sailors the chance to answer this question for themselves this coming January in one of the less traditional races on the sailing calendar.

The Ngalawa Cup launched last year and, running bi-annually, races for over 300km off the coast of Tanzania, snaking around the Zanzibar Archipelago. This January sees the fourth race set sail.

The race, which involves reaching a series of regular check points on various beaches and islands, looks to test its competitors’ sailing and endurance skills by stripping things back to basics through the use of Ngalawas.

Ngalawas are traditional fishing boats whose hulls are carved by hand from mango trees with outriggers lashed on. With a double outrigger, which acts as a hydrofoil for stability, and a triangular lateen sail, the boats can sail at speed remarkably close to the wind.

The boats require ongoing care and attention to maintain and sail efficiently and most previous competitors have had to rely on their seamanship and the knowledge and help of local islanders to get the most from their Ngalawas.

Englishman Ryan Horsnail, who is currently sailing around the world on a Catamaran, entered the race last year and admitted: “I’ve spent the last few years sailing, having sailed my own boat from New York to the Caribbean, as well as being involved in a few ocean races, including across the treacherous Southern Ocean, so I felt pretty much prepared for a sailing adventure. It turned out the Ngalawa Cup was like nothing I’d ever done before.”

“Reaching the end was an amazing experience and relief. We’d worked so hard to get there, had so many things gone wrong along the way, been sunburnt, exhausted, scared, bruised and battered around, but we’d taken on the challenge and completed it. Just the thought of it puts a smile on my face every time.”

Jake Vanags from California, who was on the winning team for last January’s race added:

“Sometimes you can’t see the highlight while you’re sleeping in wet clothes on a random beach with no mosquito protection and you have to go swim your boat out before low tide at 2am every night. But three months later, for some unknown, clinically insane reason, there is nothing you’d rather be doing.”

“When you go on detailed and guided adventures or tours, you know what you’re going to get, so there’s no reason to repeat it again. But when you stand at the edge of your comfort zone cliff, and jump off like this, your highs and lows are entirely unpredictable, and the stories are never the same. And when the rollercoaster is over, you get addicted to that natural high and line up for another ride.”

The race isn’t all about hardships though and offers some of the best sailing in the Indian Ocean atop beautiful clear waters and amazing coral reefs, with camps on some of the most beautiful beaches in the world surrounded by charismatic and friendly locals:

“The locals, I'm sure, had never had visitors before but they were so kind and even took us into their homes for dinner and to meet their families. We also spent some time with a Maasai tribe in an abandoned five star resort and they took great amusement in our attempts to light a fire before promptly relieving us of that duty and getting a roaring blaze in second,” Chris Mattock, January 2015, UK competitor.

The next race is due to set sail on the 30th Dec this year (starting on Zanzibar Island and finishes in Kilwa) and is hoping to attract 25 teams from around the world. An ‘average’ team should be looking to complete the race in 9 days, but the gauntlet was thrown down by July’s race winners who managed to do it in a new record of three and a half days.

To find out more details enter as a team of two or three or as an individual and be paired with a group of likeminded individuals at www.ngalawacup.com

A little something to whet your appetite

“I would recommend this trip to anybody who wants a real adventure … You're in for the ride of your lifetime, that's for sure.”

The July edition of the Ngalawa Cup has been won by pair of triumphant Swedes. Olof and Martin have set a new record by completing the race in only three and a half days.

We catch up with these salty sailors now they're safely ashore, beer in hand:

Congratulations, Martin, how does it feel to be record breaking winners?

“We didn’t capsize and we didn’t do anything to damage the boat.

It’s not something that we know how to relate to but it feels good having completed the race and everyone is in one piece. We’ve had a great experience so we’re very happy.

How did you manage to complete the race in only three and a half days?

I think there were a couple of reasons. The boat was clearly a good one and was really fast. We did a load of maintenance and reinforcements on it before setting off and we were quite diligent of taking care of it every evening even while sailing. Then there was the discipline aspects of it getting up at 5am every morning so we were ready to race at 6:30 and trying to go as far as we could to use as much of the daylight racing time as possible and then not making any major mistakes. So we didn’t capsize and we didn’t do anything to damage the boat. Nothing dramatic just doing the basics right.

“Spending a lot of time being alone on smaller boats has given us the confidence to know that you can fix things when they go wrong.

So do you think that's to do with all the sailing experience, could you tell me about that?

Spending a lot of time being alone on smaller boats has given us the confidence to know that you can fix things when they go wrong and knowing how to improvise and so on. We’re not professional sailors or very experienced sailors but we’ve did some sailing growing up.

How did you find the boat?

Much better than expected. They have an amazing design and sail very well.  We were doing 7 or 8 knots these last days. I think we were going 14 knots certainly some days.

Let's head over to Olof, who's the real sailing expert apparently:

“If we missed it we would miss the light and be stuck at sea in the dark.

How did you find the boat? Was it difficult to sail?

Not particularly, I mean it’s all about expectations. We’ve been sailing a bit before and my image of this boat was that it was supposed to be carved out of a log with a stick and a piece of fabric cloth on it and it’s actually a real boat and you can handle it quite well. You can’t tack though and you can only gybe which makes it more tricky. Apart from that it behaved very well. It’s actually stable in high speeds so we were going at about 35 knots. A very high speed.

What was the toughest moment for you?

We were heading for this island we were staying on for that night and it was close to nightfall. We only had one shot to land on the island. If we missed it we would miss the light and be stuck at sea in the dark. We didn’t have a clue what it looked like, if it was a rocky or sandy. It turned out if we had come the wrong side of it we would have probably just crashed into the island.

Phew, that's a close call. What about your best moment?

Definitely the crossing we did between Dar es Salaam and the island of Zanzibar, it’s a piece of open water with very strong winds. It was just beautiful sailing for hours straight doing 10 knots. That was the highlight of the trip.

“I wish we could have kept on it for longer.

How are you celebrating?

We had a great lunch at the bar and something like beef for dinner. I mean we did it for the experince more then anything else so I think we’ll get some sleep from enjoying it. I wish we could have kept on it for longer.

What advice would you give to future Ngalawa competitors?

“It’s an excellent experience, everyone should do it.

It’s an excellent experience, everyone should do it. If you do nothing to the boat it is very unlikely I’d say that it will make it in one piece. You need to prepare the boat for the crossing especially as you’re going to push the boat quite far. Everything is readily at hand. Spend a couple of days or two buying a couple of hundred meters of rope and tie everything together and bring repair stuff on the boat so you can repair everything on the move.

This pair impressed our local man from the start who dubbed them ‘albino Tanzanians’ – rather a compliment from the veteran sailor. They lived up to their promise and went on to win the whole race. Bravo chaps.