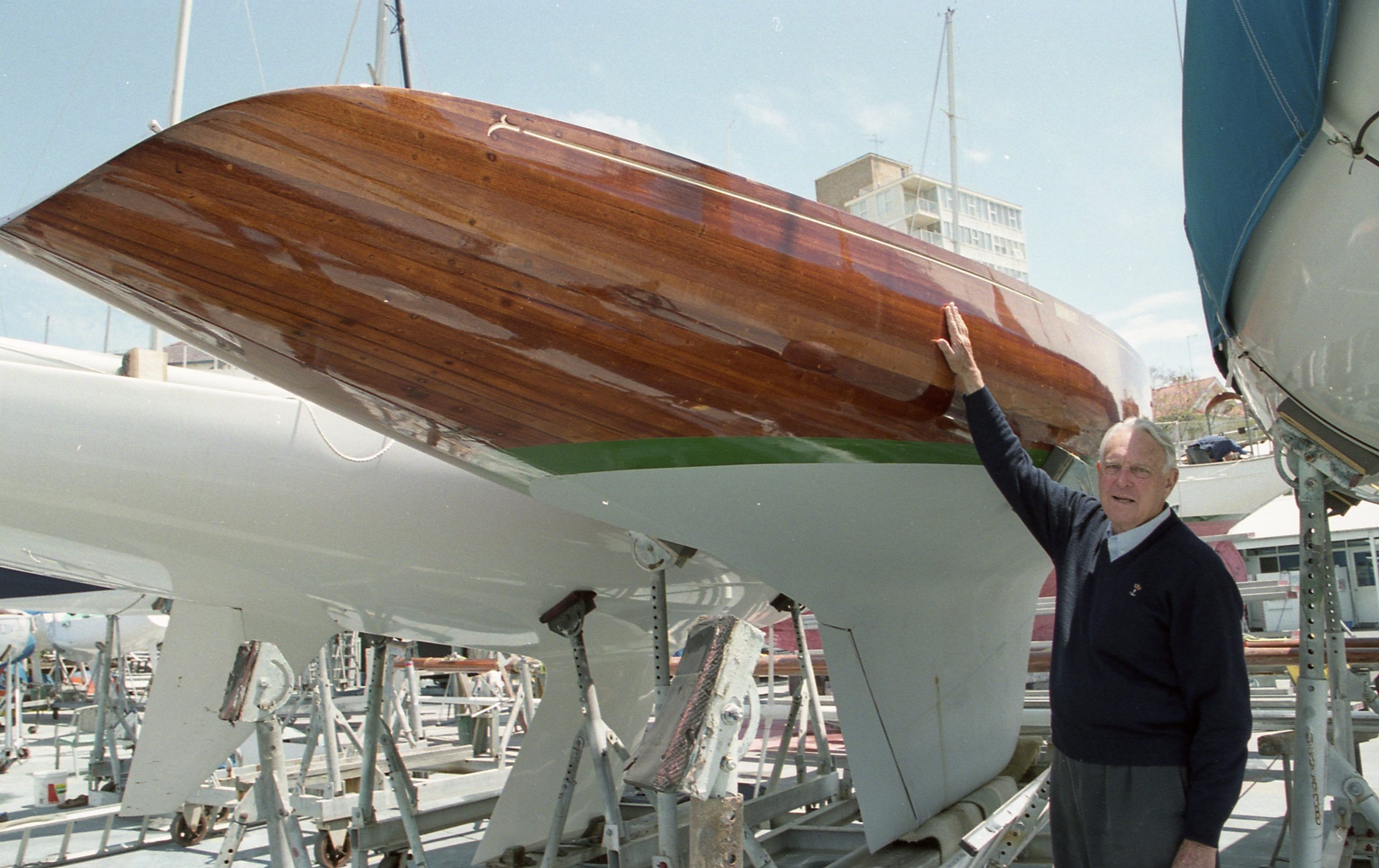 Bill Solomons with the restored Barranjoey in 2004. Photo Bob Ross.

Solomons’ long and successful career in sailing began with skiffs and ended with the Star class on Sydney Harbour.

His course to the Olympics in 1968 was a rough one. He and long-time sailing friend Mick York came together to sail Kevin McCann’s brand new 5.5 Carabella in the Olympic trials. But during the Australian championship, on Botany Bay, McCann and Solomon had a disagreement. McCann said he would steer the boat himself and Solomons walked off.

Two days before the trials, Solomons chartered Barranjoey, from Bill Northam who, crewed by Dick Sargeant and Pod O’Donnell had won the Olympic gold medal with her at the 1964 Tokyo Olympics. The boat had been sitting on a mooring outside Northam’s Pittwater home for four years; hardly raced since Tokyo.

Young Scott Kaufman joined Solomons and York as middle man. Barranjoey retired from the first race after a port-and-starboard incident but went on to win the trials on a placings countback after tying on points with Norman Booth’s new Olin Stephens-designed Southern Cross III.

Getting to the Games, at Acapulco, Mexico, was still far from certain. The Australian Olympic Federation had specified a yachting team of eight sailors and a manager. The Australian Yachting Federation nominated crews in all classes but in order of preference with Barranjoey last.

After further strong lobbying, with the influential Northam playing a shrewd role, the AOF agreed to send the nominated team of 11 and a manager.

Then Mick York had to withdraw from the team for business reasons. Jim Hardy, who had been nominated as a reserve, replaced him, sailing in the middle while Scott Kaufman moved to the bow.

With the pace of 5.5 design evolution, Barranjoey was completely outmoded at Acapulco. Solomons and his crew sailed extremely well to finish seventh in the fleet of 14, especially after the boat was severely damaged by a Mexican workboat on the morning of race five.

Reverse gear failed on a 27-tonne landing barge which was dropping some people off at steps in the marina near where the 5.5s were parked. It began snapping the bow and stern lines of the 5.5s moored alternately bow and stern to the marina.

The English boat had a four-inch hawser for a bow line that would not break. The impact forced the whole boat under water. When it leapt out, its stern went straight through the mahogany topsides of Barranjoey, leaving a 2m x 0.5m hole.

The shipwright who had built the Canadian 5.5 went on board and with his feet pushed the damaged section back into place. With his help, the Australians fitted timbers across the damaged section inside the hull, laid fibreglass over them, filled the indentation outside the hull with micro balloons, sprayed varnish over it and went out to race.

“It was a pretty soggy old boat by that stage and my nerves were shattered,” said Solomons. “Having that happen to you in the middle of the Olympics would break anybody’s heart, but we got out there and they only had to hold the race up ten minutes. The day was very light and with my nerves shot, we came 12th.’

The repair was effective and the boat was restored to mint condition for Bill Northam who subsequently donated her to the Australian National Maritime Museum.

When the 5.5 metre class world championship was scheduled for Sydney Harbour in 2004, Solomons chartered her for a season from the museum and with Mick York and shipwrights at the museum’s Australian Heritage Fleet, replaced the rotted deck, splined the many gaps in her mahogany hull, outfitted her with new sails, rigging and fittings to compete in the Classics division of the worlds.

They finished second in the Classics to Carabella, the boat Kevin McCann had built for the 1968 Olympic trials, under newest owner Alfredo Deli of Italy.

Barranjoey then went back to the Australian National Museum where she is on display with the Sydney Heritage fleet.