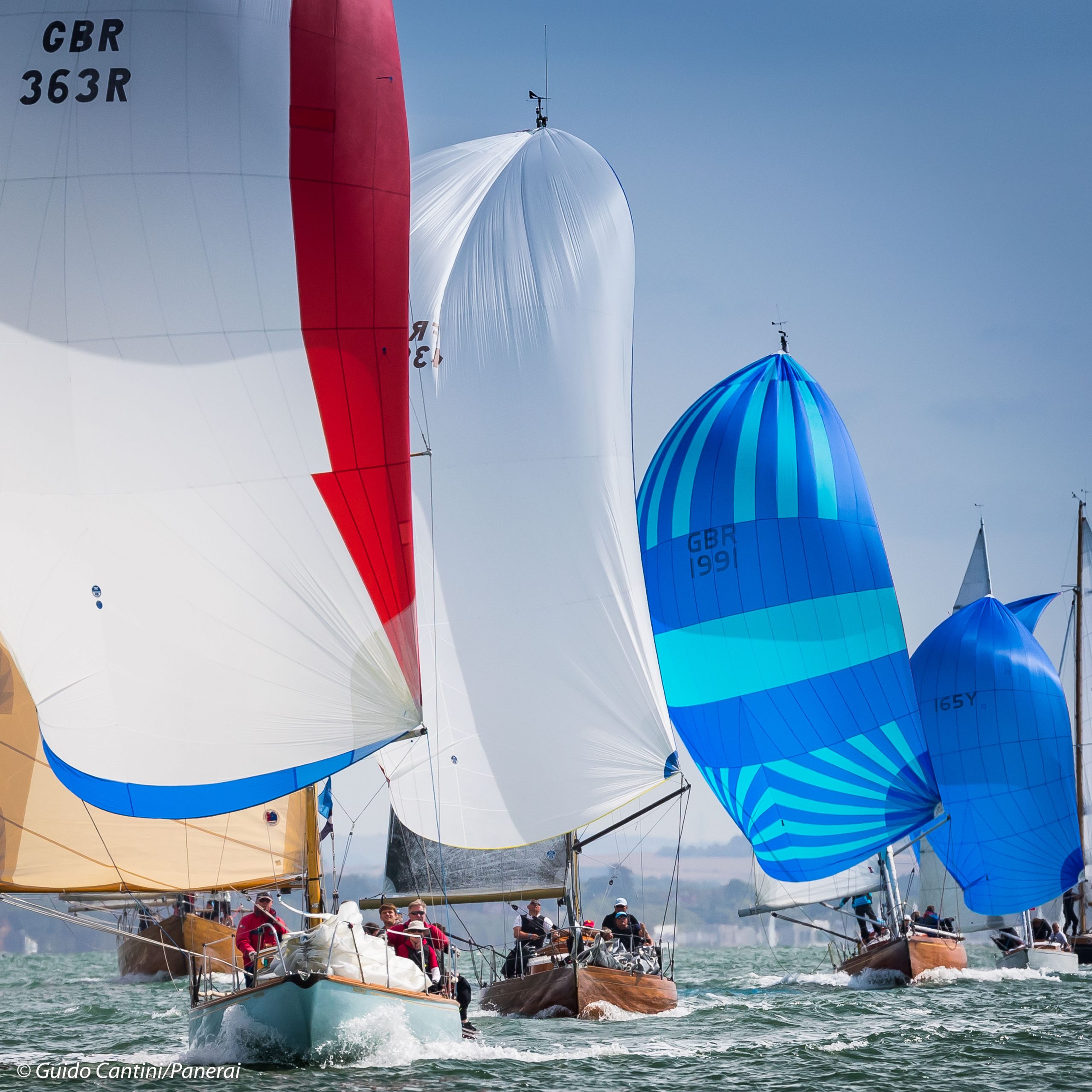 It was sun and fun all the way on day five of Panerai British Classic Week 2017 in Cowes, where not only did the participants enjoy some fiendishly tricky racing, but they also finally came together for the traditional Open Yachts Pontoon Party, sponsored by Spirit Yachts and Classic Boat, which had to be postponed from Tuesday because of torrential rain.

On the water the Solent delivered some exceptionally testing conditions as Classes 1 to 4 took part in the Long Inshore Race sponsored by Classic Boat (race six of their series) and the 6 and 8 Metres did two further round the cans races (races six and seven).

Conditions were somewhat mixed with a shifty but established south easterly early on in the day. The boats went off the line to the east on a Central Solent course and made good progress until the final reach past Gurnard and along Cowes Green to the finish.

By this time the wind was dying and many of the boats seriously struggled to make the line over the strongly ebbing tide. When they eventually did cross, each boat received a rousing cheer from the Squadron Platform to honour their efforts.

Back ashore the Panerai Lounge was buzzing with its usual post racing hospitality, and then at 18.30 everyone moved down onto the pontoons to view and visit the yachts, enjoy free flowing cocktails, delicious food, and live music while they talk classics and generally soak up the amazing atmosphere.

With just one more race to be sailed, a number of the classes have already been decided. In Class 1 Irvine Laidlaw’s Spirit 52 Oui Fling took second place in race six, a mere eight seconds behind Sean McMillan’s Spirit 52 Flight of Ufford with Michael Hough’s Chloe Giselle third.

In the overall standings Oui Fling cannot now be beaten and Flight of Ufford is certain of second, but there will be a final race showdown for third place between David Grylls Spirit 46 Helen of Durgan and Chloe Giselle, who are only one point apart.

Giovanni Belgrano’s 1939 Laurent Giles sloop Whooper vanquished her rivals in Class 2 with a fifth win today, but whilst she is assured of victory, Gildas Rostain’s Olin Stephens One Tonner Volonte, Andrew Pearson’s 1937Johans Anker Bermudan cutter Bojar and David Murrin’s 1955 Laurent Giles sloop Cetewayo will take the battle for second and third down to the wire.

A very happy Giovanni Belgrano said of their day, “It was actually a really nice day, a beautiful day. My crew were amazing. We made massive gains through crew work. There were lots of (mark) roundings, and I think we were taking close to a minute per lap out of the boat behind us, mostly through the roundings, and that was purely crew work.”

For the 6 and 8 Meters it was a two race day. Robin Richardson’s 1987 Ian Howlett designed St Kitts won both of the 6 Metre races, putting her onto twenty-five points overall and firmly in striking distance of not only second placed Thistle, owned by Tom Richardson, on twenty-three points, but also current leader Sioma, owned by Fenton Burgin, who is on twenty points.

In the 8 Metres Murdoch McKillop’s beautiful 1931 William Fife III designed Saskia claimed both races with Christopher Courage’s 1936 Alfred Mylne designed Helen second in both. The only way in which Helen can now beat Saskia is if Saskia is unable to complete the last race for some reason, so although both boats will race tomorrow, Saskia’s victory is very nearly assured.

You meet a wonderful cross section of sailors at this regatta and amongst this year’s competitors has been Annabel Vose, a member of BAR Racing’s Junior America’s Cup winning team, who has been sailing with Sam Laidlaw aboard the 1966 Sparkman & Stephens 37 footer Clarionet.

“It’s definitely a change of pace, but I’ve done the week with Rob and Sam a couple of times already, so it’s fun to be back in the fleet. It’s very different to go from 12 minute races to this one which was nearly five hours, but I’m enjoying it definitely,” Annabel said after today’s long inshore race.

Tomorrow’s final races will get underway from the Royal Yacht Squadron start line at 10.00 and the regatta will conclude with the Panerai British Classic Week Prize Giving Dinner and Dance at the Haven Events Centre.