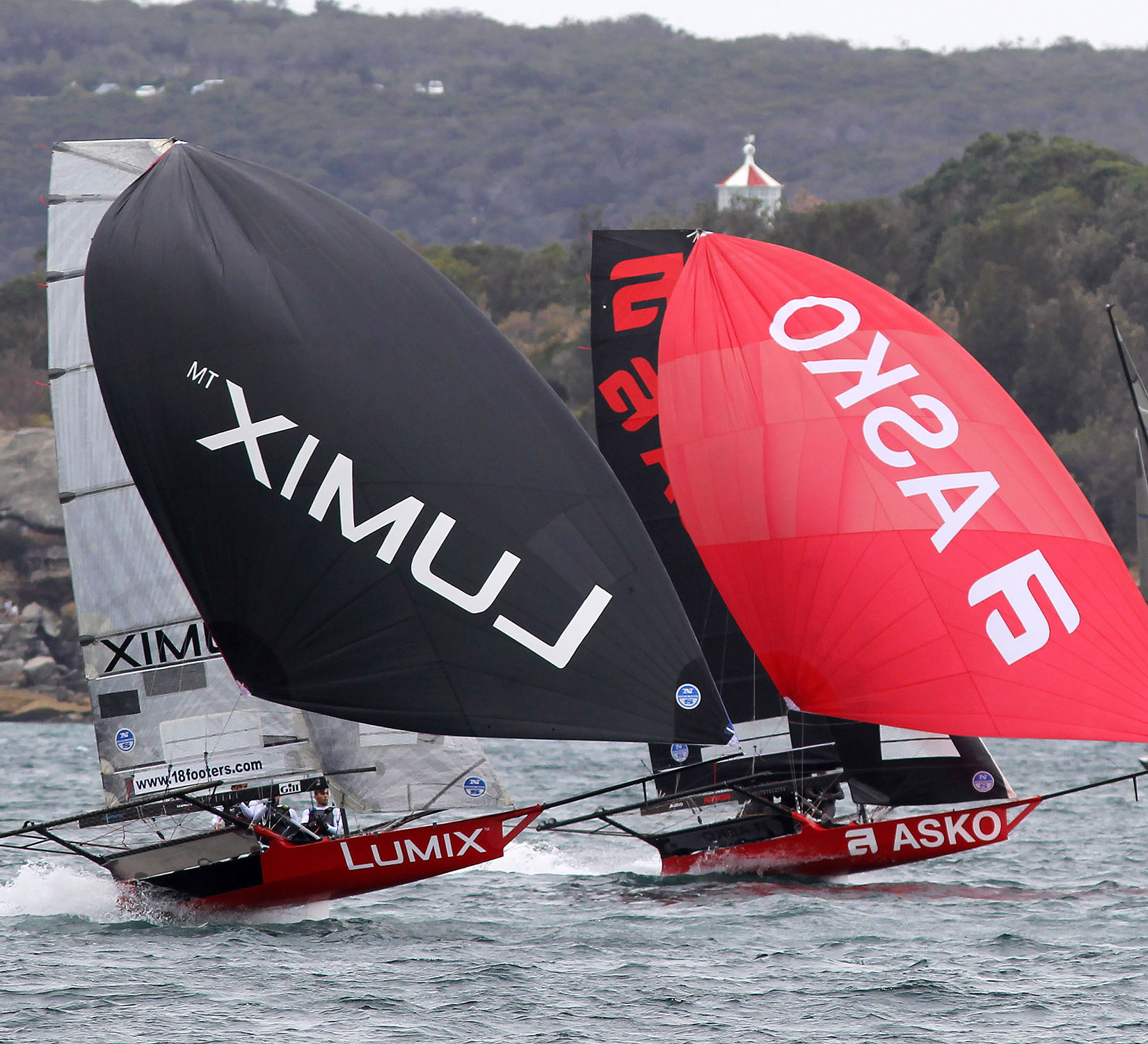 Panasonic Lumix and Asko Appliances in tight spinnaker action on the first run.

09/10/2017
The 18ft Skiffs were back on Sydney Harbour today when the Australian 18 Footers League conducted Race 1 of the 7-race Spring Championship to open the 2017-2018 Season.
Conditions were steady from the North East for the 14-boat fleet and the race provided a drama-free day for many of the new teams.
Retirement of some of the long-time competitors meant there were new crews joining the 18s for the first time and other young sailors moving up to some of the more-fancied teams and we were given a glimpse of some of the potential of the young teams. In fact, the winning Panasonic Lumix team of Jordan Girdis, Lachlan Doyle and Nathan Edwards scored their first in the 18s after leading for more than half of the 3-lap course.
Panasonic Lumix defeated another young team of Ben Bradley, Rory Cox and Jacob Broom in Coopers 62-Rag & Famish Hotel. The winning margin for Panasonic Lumix was 22secs. Third place went to the experienced Smeg team of Lee Knapton, Mike McKensey and Ricky Bridge, which finished a further 1m21s behind Coopers-Rag. The new Finport Trade Finance (Keagan York) was fourth, followed by Yandoo (John Winning) and Appliancesonline.com.au (Brett Van Munster).
The Rag led the race after the first windward leg, with The Kitchen Maker (Jonathan Whitty) in second place and Triple M (James Ward) close behind in third place.
Two teams, The Kitchen Maker and Asko Appliances (James Dorron) capsized on the spinnaker run from Beashel Buoy to the wing mark in Rose Bay.
Coopers 62-Rag & Famish Hotel maintained her lead past the wing mark and down to the bottom mark off Clark Island but Panasonic Lumix had reduced the margin to 30s after a strong performance under spinnaker. Smeg edged slightly ahead of Triple M to move into third place.
Triple M was then forced out of the race with gear failure and Yandoo grabbed fourth place as the fleet headed back upwind to the Beashel Buoy.
The young Lumix crew were hot and grabbed the lead at the second set of windward buoys and were never headed from that point.
Despite the pressure being applied by Smeg over the final lap of the course, Panasonic Lumix showed real grit as the young team raced on to a great first win.
Skipper Jordan Girdis was ecstatic with his first 18s win and put it down in part to the experience they gained in the off-season regattas in Auckland and Lake Garda.
The Spring Championship will continue over the next six weeks (last race of the championship will be sailed on 19 November) with a cumulative pointscore system applying over the seven races.
Race 2 of the Spring Championship will be sailed next Sunday.  The Australian 18 Footer League's usual spectator ferry will follow the race, leaving Double Bay Public Wharf (alongside the clubhouse) at 2.15pm.
NOTE:  The season's highlight, the JJ Giltinan Championship will be held on Sydney Harbour 2-11 March 2018.
Frank Quealey
Australian 18 Footers League