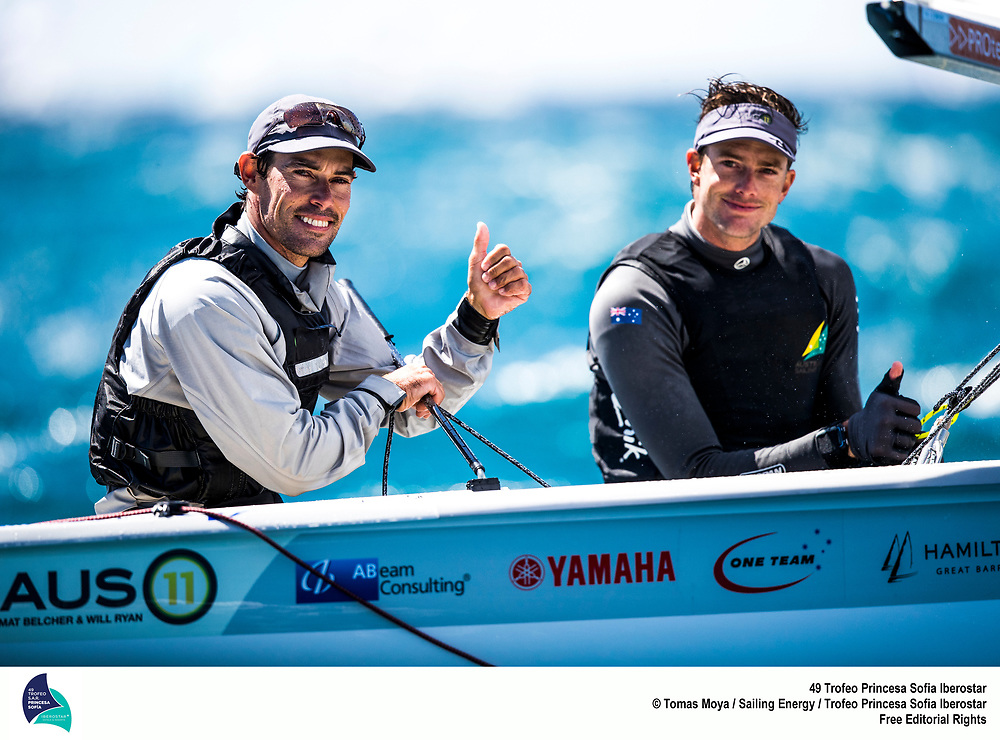 Bang on cue Mallorca's Bay of Palma fired up the best breeze yet of the 49 Trofeo Princesa Sofia Iberostar as the Finals phase started for most of the ten Olympic classes. In warm spring sunshine the breeze puffed to 18 kts at times to present a new, more physical challenge.

Only Australia's Mat Belcher and Will Ryan in the Men's 470 and their female counterparts France's Camille Lecointre sailing with Aloise Lecointre sailed the perfect day, both crews unbeaten in the breeze today.

The full-to-capacity fleet of Lasers and Radials revelled across their briskest day of racing yet as the breeze picked up to 15-17kts at times with sharp, steep waves typical of the Bay of Palma.

As the level stepped up into the first of the Finals races the Netherlands' double Olympic medallist Marit Bouwmeester, current world champion, posted the best two race tally for the day, winning the first contest and finishing fourth in the second. She lies two points clear of Danish rival Anne-Marie Rindom, 2016 Olympic bronze medallist and 2015 world champion.

“It was windier today and it took some time to settle into one direction. It was still tricky with everyone seeming to sail really fas,” commented Bouwmeester. “This is only my fourth event since Rio and I feel like I am still getting into it but I'm really enjoying it.”

The top of the Men's fleet has a certain Kiwi-Australian air to after their first two windy Finals races. New Zealand's silver medallist Sam Meech leads after a first and fourth ahead of Australia's Matthew Wearn, 2017 world championship bronze medallist. With Croatia's Tonci Stipanovic in third and Australia's Olympic champion Tom Burton now in fifth the quality of the Laser fleet is reflected in the fact that all three Rio medallists are in the top five.

“It was shifty but there was not the pressure differences of the previous days and so you could not really get left behind. I was not good early in the first race and got back into it and the second one was OK,” smiled Burton of his 4,2 day.

Closest to perfection in the windier conditions were the Aussie 470 duo Mat Belcher and Will Ryan who stamped their authority on the strong fleet, opening the Finals series with two bullets. But French duo France's Camille Lecointre and Aloise Retornaz matched their male counterparts with two wins in the women's fleet. Belcher and Ryan now lead by 19 points, a margin exceeded only in the Finn fleet where Giles Scott looks set to repeat January's Sailing World Cup Miami dominance, already 20 points up after his  nine points aggregate day going 3.6.

Olympic gold medallist Scott was at one with the venue today, returning to the S'Arenal dock with a smile: “Good old Palma, delivering today. It was good. And what time is it? It's not even two, so in time for lunch! It was hard sailing and I think a lot of people were caught out with settings as well. The breeze came in so quickly before the first race I imagine a lot of people were caught out. I know I was. Within about five minutes it had jumped from 10 to 20 knots. But it was good.”

Confirming the widespread belief that winds are forecast to be light to tomorrow, he added: “Now I think tomorrow is going to be another tricky one. It’s going wishy-washy light sea breezes by all accounts. But we are on schedule.”

The Rio medallists are in the driving seats in the Women's 470 fleet too, albeit both of the top two Rio helms are now in settled in different partnerships. Leaders are France's Lecointre, bronze winning helm now with Retornaz who are just two points up on Britain's gold winning helm Hannah Mills now with Eilidh McIntyre.

Mills explained, “It’s been a really tough week so far but it’s been good – we’ve had a real mix of conditions and we’ve learned a lot each day. We didn’t get our approach right on the first day and made a few mistakes but since then we’ve been a lot more proactive on our mindset, our priorities, our approach. So far so good, but there’s still two more days of fleet racing to go.”

McIntyre, whose father Mike won gold in the Star in 1988, added: “Our results today look good on paper but we feel like we could have done better. That’s a nice place to be though, with plenty more learning to do.”

As the pressure ratcheted up in the 49er fleet in the testing, bumpy conditions – the Men's Skiff is not at all easy in the short, steep and deep Palma chop – the best tally today was returned by Poland's Lukasz Przbytek and Pawel Kolodinski who moved up to second. After two races today Argentina's Lange brothers Klaus and Yago had taken up the overall lead but they popped in a 13th to drop to third overall.

Yago Lange recalled, “We started strong in the breeze, seeing 18kts at the start, and we loved it. We felt confident having been training hard at home in Buenas Aires. The last one we made a mistale and this fleet is so tight that was it. Everyone is so pushing so hard. We made a bit of a comeback on the first downwind to get to 13th. That was a good day for us. We decided not to go to Miami to do a big boat regatta in Chile which was a great experience. We have put a lot of focus on ourselves, we have worked hard on our teamwork on our manouevres and then we had the Austrians over for ten days when we did some speed testing. It is all building up in a good way. The chop and waves here are interesting, you are all the time focused on not nosediving.”

Britain's world champions Dylan Fletcher-Scott and Stu Bithell sailed a discard 19th, fourth and first and are five points up at the head of the 49er leaderboard. The FX class continues to see the dominance of the Netherlands' Annemiek Bekkering and Annette Duetz who are now 14pts ahead.

New Zealand's Olivia Mackay and Micah had a close to perfect day with two wins in the Nacra 17 class and a second to move up to fourth, the biggest movers of the the day while Italy's Ruggero Tita and Caterina Banti extended at the top. They are showing the benefits of their intensive windy winter in Cagliari, Sardinia now 14pts ahead of the pack. They have been driven through the winter by memories of the final race of the World Championships when they scuppered their title chances in a collision with Spain's Iker Martinez and Tara Pacheco.

Britain's Emma Wilson had the best of days in the RS:X women's fleet, profiting from three hard weeks training here. Her second and first from the first Finals races move her to eighth overall.  She said “I was quite relaxed and just went out to enjoy it and try to keep it simple. I had good speed so that helped a lot. Normally I like the lighter breeze but we have been out here for three weeks now and have had some pretty windy days so I think I’ve improved a lot in it. There’s a long way to go still so I’m just going to keep giving my best and enjoying it.”

Due to the light winds forecast the first start Thursday is scheduled for midday.