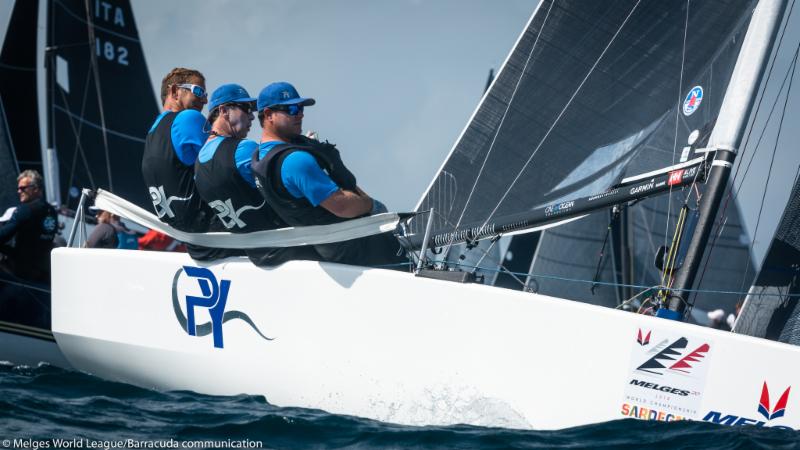 It was obvious that crews were feeling the pressure to do well. The high and choppy waves were challenging, whereas the only thing the fleet seemed at ease with was the moderate 12 knots of breeze.

The American teams, however, were by far the most comfortable in the ocean like conditions, setting the pace by winning the first two races. But, at the end of the day, it was the brilliant Filippo Pacinotti at the helm of Brontolo, with tactician Manu Weiller, in first place overall.

“It's only the first day, but of course we are happy to be where we are at. In the grand scheme of things though, it counts very little,” Weiller said.

“Filippo is very good at sailing in challenging conditions. The competition here is very balanced, so our first rule is to try and avoid making any mistakes, in order to remain in the lead.

“Tomorrow's weather forecast states that there will be less wind and waves, which means the race course will look and feel completely different. We hope to give our best.”

The first race of the event showed a very nervous fleet, as it took three General Recalls before the inevitable Black Flag was flown. Once off the starting line, defending world champion, Drew Freides' Pacific Yankee, with Morgan Reeser as tactician, gained a substantial lead, then extended for the win.

In the third and final race of the day, Wilson came on strong again, but not strong enough to overtake the lead from recently crowned Melges World League, European divisional champion, Pacinotti.

In flying blue colors, Pacinotti took the bullet just ahead of Wilson in second. Matteo Marenghi Vaselli's Raya, with tactician Nicolo Bianchi, had a great race to finish third.

The results at this stage of the Championship are very tight, with one point separating Pacinotti from Wilson. Prosikhin is three points back seated in third overall, then Freides – and rising through the ranks to finish the day in fifth, is Russia's Igor Rytov at the helm of Russian Bogatyrs.

With three races completed, Mikhaylik got the upper hand today to head into Friday's racing as first Corinthian, followed by Giannini in second. Russia's Tim Katalevskiy's K&K is currently in third.

Melges World League has signed and adopts the code of ethics of the Charta Smerarlda strongly promoting the values of One Ocean Foundation.