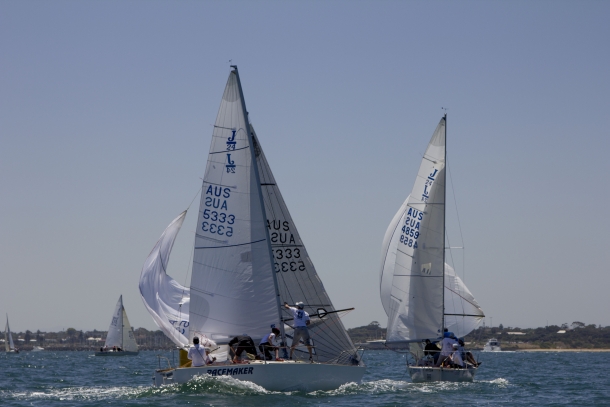 Action at the top mark during the J24 National Championships.

With the series win in the bag after eight wins out of the ten races sailed in comfortable conditions, they were spectators at the last start, watching Doug Watson (El Fideldo) win the last race for a second overall ahead of Brendan Lee (By the Lee) and Simon Grain (Code Violation).

Fifth was Kirsty Harris in Hyperactive and Ron Thompson in Kicking 6th. Rob Hogan coming in 7th making the famous Cookie Monster get up and fly with a best place 2nd in the regatta and Dave Mackay from Cronulla, our newest ‘circuit devotee’ in Stockcar coming home 8th. Sixteen crews from SA, VIC and NSW enjoyed excellent racing under the control  of PRO John Gibson of the CYCSA.

A notable feature this year was the large number of women competing, around 30% of all competitors, so come on girls – this is a class you can enjoy with the guys !

Thank you to SA President Jim Townsend and wife Robin, all the CYCSA members and volunteers in helping to put the Nationals together and making it a well run and smooth operation.

The J24 racing is alive and well in Australia with 20 plus boats expected for the Vic States in April.