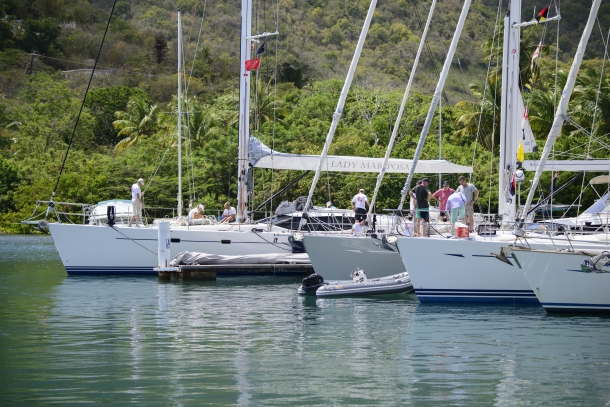 Tucked into the south side of charming Tortola, the restful Nanny Cay Marina gently stirred today to the buzz of Oyster’s 35th own class regatta, the sixth Oyster event here in the British Virgin Islands. It’s registration day and as the final arrivals in the fleet of 15 found their berths, others here earlier popped back out for practice or more leisurely patrolled the dock peppered with sails and kit out for inspection and repacking ready for the start of racing tomorrow.

Divided between two classes for the four days of racing ahead, the fleet here as always expresses well the diversity in Oyster ownership from the 2000-built Holman & Pye Oyster 45 Taboo of St Helier to the very recent Humphreys Oyster 825 Reina. From family only to fusion of friends and fast trackers, or should that be fast tackers and strategists, every level of skill is here, and though a challenge for the home grown handicapping, this mixing is a true mark of keen shared experience. The Oyster regatta brings something for everyone… sensational sailing and socialising!

The bulk of fleet comprises regular Oyster regattistes joined this year by four first timers, Peter Blackmore’s Oyster 49 Pied Piper, David and Leslie Joyce’s 575 Ayesha II, Stephen Lambert’s Atalanta of London, also a 575,  and Ken and Diana Randall’s 72 Infiniti of Cowes. At the opposite end of attendance, is Oyster 82 Starry Night of the Caribbean with 19 race pennants to her credit, while Richard Smith,  a close second, has a  tally of 15 aboard his 655 Sotto Vento with remarkably the only possible missed regattas a result of his being away sailing the Oyster World Rally! Ian Galbraith on Oyster 53 Jigsaw also flies a fine line of battle flags, keenly contesting here in the Caribbean and also with friends in the Med.

Familiar faces on different, newly bought boats include John McMonigall who’s scaled up to Oyster 82 Zig Zag from his 575 Zaybo which he retains currently in Turkey, and Alan Parker similarly moves on to an 82, Dama de Noche, from his Oyster 54 Oyster Reach, currently on brokerage.

The fleet divides between two classes with the Oyster 82s, which include also Bill Dockser’s Ravenous II, at the heart of Class 1, joined by 825 Reina, mentioned above, the 625 Lady Mariposa, skippered by Dan Hardy, and David & Joanne Furby’s Vamos.

Though bigger, Oyster 655 iSNL joins Sotto Vento, fellow 655, in the wider ranging Class 2 which spans Paul and Diane May’s Oyster 45 Taboo through to Ken and Diana Randall’s 72 Infiniti of Cowes. It’s a broad church but this division provides a split that brings better balance and reduced risk to the mixed ability and boat speed fleet, and comes only after a reappraisal of the handicapping system in conjunction with Humphreys Yacht Design. Together analysing all past results and actual performance, new VPPs (velocity prediction program) were created to uncover anomalies now ironed out by stretching the percentage separation within the fleet.

So, that’s the line up, but what does the racing look like? First, all things permitting, and it has to be said that the prevailing, constant 15-20 knot Trade Winds tend to help here, it’s four races with one discard. But there’s added interest. The BVI regatta is a rolling event racing from one island base to another. Tortola’s Nanny Cay first, with tomorrow’s Race One a wriggly course to Norman Island, before Race Two’s long beat up to Virgin Gorda and the Bitter End Yacht Club for a lay day followed by two more days’ racing with a night between at the YCCS.

And, of course, at every stop there’s a good deal of partying. This Day One, it was a welcoming cocktail party at the beach bar before a fine Caribbean flavoured buffet for the 120 Oyster crew, chatting and supping the night away. But tomorrow after dark be warned if on Norman Island. There be pirates on the way… it’s fancy dress night, but only after some fancy course work, too.