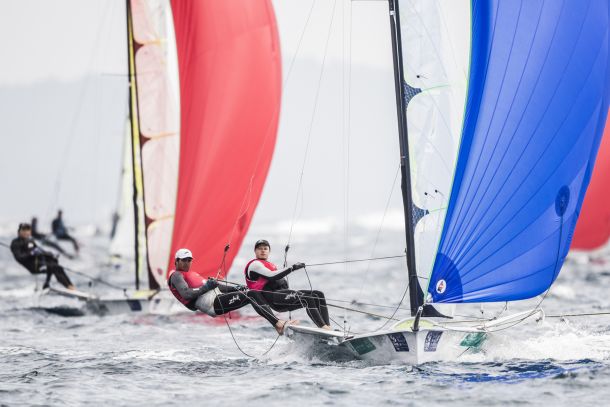 It was the penultimate day of Olympic class competition at the ISAF Sailing World Cup Hyères with sailors battling it out for a spot in the Medal Race that will be broadcast live online on Sunday 26 April from 11 a.m. CET (19:00 AST). The day started out with two silver medals for Australian Sailing Team’s Paralympic boats of Colin Harrison (WA), Jonathan Harris (NSW) and Russell Boaden (WA) in the Sonar and Matt Bugg (TAS) in the 2.4mR.

In the Olympic classes it was an intense battle for the top-ten medal race spots with the Australian Sailing Team qualifying seven boats in tomorrow’s Men’s 470, 49er, 49erFX, Nacra 17 and Laser classes.

Tom Burton leads the Laser class, with Mat Belcher and Will Ryan in the Men’s 470 and David Gilmour and Rhys Mara in the 49er placed third ahead of tomorrow’s medal races.

They had an up and down week, but on the final day of fleet racing Olympic gold medallists Nathan Outteridge and Iain Jensen secured an ISAF Sailing World Cup Silver Medal with one day to spare. Winning three out of twelve races across the week, including the final race of the day, secured the pair second place behind current World Champions Peter Burling and Blair Tuke (NZL). With a 55 points difference to the top but also to 40 points to third, their silver medal is secure with one day to spare.

Going into the medal race in third will be Australian Sailing Team’s David Gilmour (WA) and Rhys Mara (VIC) who moved up from seventh place on Friday and after a consistent performance throughout the week. Eight points separate them from fourth so they will have to be on their game as crew Rhys Mara explains:

“I guess we’ll just have to have a look at the points gap back to fourth, fifth etc. and see what we really have to do and just play the percentage from there. We don’t want to take too many risks. We just want to use our boat speed and a good start, get off the line and just get a solid result to hopefully bring home the bronze medal.

In the Women’s Skiff – 49erFX, the fleet had four races to complete after they only completed two in Friday’s light conditions.

Olympic silver medallist Olivia Price (NSW) and crew Eliza Solly (VIC) made the most of it and moved up the ranks recording an eleventh, ninth, eighth and fourth place. They are ranked seventh going into the medal race.

World Champions and World #1 in the Men’s 470 Mat Belcher (QLD) and Will Ryan (QLD) moved up on the final fleet racing day and will contest the double-points medal race from third place.

“Today was the last day, so people were a bit more risky. Everyone knows it’s the end of the competition, so people were fighting for positions to get into the medal race, but every point really matters. The intensity today was pretty high and definitely a lot higher than the last two days. Will and I raced well, we were a bit more comfortable in the fleet and with our strategy, and a bit more into our rhythm, which is great,” Mat Belcher said about the day’s racing.

“Getting into everything was one of the goals coming into this event for us, as it is our first major European event. We're going to be here for the next six months, so it was good today to get settled into the competition and to get comfortable and we’re looking forward to the medal race tomorrow (Sunday).”

After the Croatian was disqualified for a Rule 2 infringement relating to fair sailing, the international jury awarded Burton points redress equivalent to a 21st place, which sees him in the lead by just two points from Nick Thompson of Great Britain going into the medal race.

Two Australian Sailing Team crews will contest the medal race in the Nacra 17 after Friday’s final four races. It will be a battle for the medals as well as an interesting Australian team outcome with only three points separating Olympic medallists Darren Bundock (NSW) and Nina Curtis (NSW) in sixth from World Championship bronze medallists Jason Waterhouse (NSW) and Lisa Darmanin (NSW) in seventh.

Jason Waterhouse and Lisa Darmanin started the week in the lead and had been amongst the leaders throughout the week.  After a 3rd place in today’s first race they moved up into 2nd overall, but then dropped down the ranks with some poor starts leading to high point scoring in the last three races of the day. Darren Bundock and Nina Curtis managed to overtake them through consistent results, including a race win.