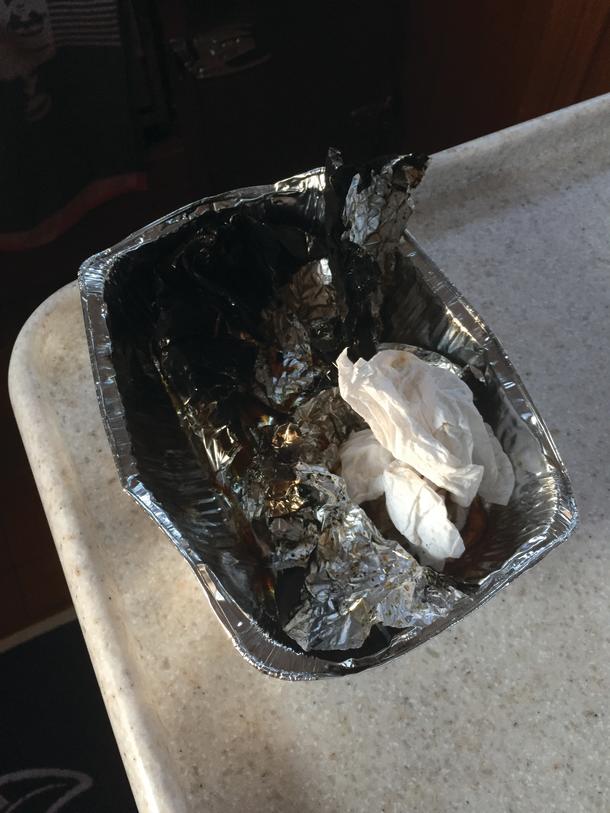 The clean up was not so good.

Our recent on board experience adds new meaning to the term ‘chargrilled’.

There is nothing better than the smell of something sizzling away on your barbecue in the cockpit. But when someone asks casually “what’s that funny smell?” You know you may have a problem.

In this instance we were roasting a lovely piece of sirloin on our cockpit BBQ, but with quite a thick layer of fat. We had decided, correctly, to roast this fat-side up; we’d done it before and it worked well: 20 minutes on the low setting and it would be perfect.

What possessed us to then think it was a good idea this time to turn it over halfway through cooking, is still an unknown: first mistake.

That “funny smell” turned out to be blackening tinfoil that we had placed the meat on, along with a fair amount
of smoke.

As we glanced back at the smoke billowing out, we had two main concerns: was all the smoke spoiling happy hour for the other boats nearby and could we rescue our dinner?

We decided to open the lid and get the meat out: second mistake.

Yes, we got the meat out OK, but letting more air in did not help matters and the smoke now turned to full-on flames.

As we stood there stunned, we quickly realised that, stupidly, the outboard motor full of petrol was sitting on its bracket right next to the BBQ: third mistake.

We quickly put the lid back on and thoughts then turned to remembering where the fire blanket was.

The BBQ we have has some large ventilation holes in the lid, so the flames were still lashing out through there. “Let’s get the BBQ off the pushpit and away from the outboard motor”, we thought.

We were also imagining the headlines in the paper the next morning: “boat owned by insurance broker explodes from BBQ igniting outboard motor fuel”. Not a good look and bad for business.

We found the fire blanket and decided to lay that down on the boarding platform so we could place the BBQ on it safely without the flames damaging the teak. In hindsight we should have just thrown the blanket over the BBQ in-situ to extinguish the flames: fourth mistake.

As we placed the BBQ on the stern, the combination of delicate handling needed due to the flames and the circular shape of the BBQ meant we lost control of it and it ended up rolling over the side and in to the drink. Fire out though: problem solved.

Oh dear, what a crazy turn of events. We could not help but laugh hysterically, even though it could have actually been a disaster and hazardous to our health. The whole episode must have looked like a cheap comedy. We did have brief concerns if the neighbouring American boat had been quietly filming us and we would end up on Youtube shortly.

Any good news? Well, the meat tasted just fine. Plus, we got the BBQ back the following day. We were only anchored in shallow water around four metres.

We had an idea of where it was, from a transit we took from a house on a neighbouring hillside. We waited until low tide then put the snorkel and flippers on and, armed with the extendable boat hook, went ‘fishing’. It did not take long to find it in the nice clear water of the Bay Of Islands in New Zealand and we were able to reach down with the boat hook from the surface and bring it back up.

It felt good to retrieve it, but we looked at the blackened mess and decided we would ditch it anyway once we got back home. At least now we were not polluting the bay.

The oven got a good work out for the rest of the trip, but it was not quite the same as that nice sizzling sound in
the cockpit.

For the future, we will make sure we move the outboard and will not make the same mistake again of turning the fat side down.

Perhaps a change of chef might also be a good idea? ≈