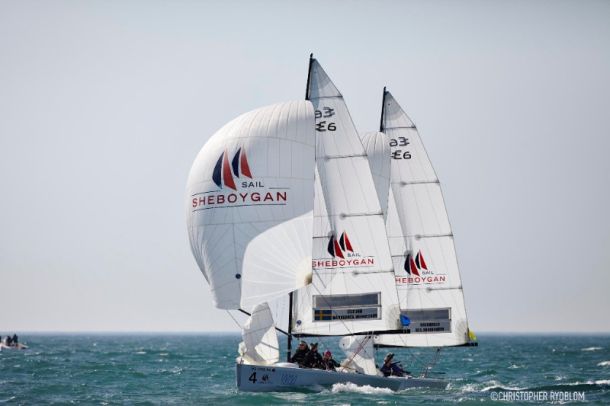 On her comeback to the match racing scene, Renée Groeneveld of the Netherlands surprised with six wins and just one loss on the first day of the Buddy Melges Challenge, the penultimate event of the 2015 WIM Series. World #2 Anna östling scored one win less on Lake Michigan, USA, but still sits alone on the very top of the leader board, rewarded for her perfect 5 – 0 score.

“We worked smoothly together in the boat today, focusing on the big picture. That made us really fast, especially upwind,” the Swede comments.

“It was good fun today, in great conditions. The waves made the racing very technical, but our boat handling was excellent,” says Groeneveld.

Renée Groeneveld represented the Netherlands at the match racing competition of the 2012 London Olympics in Weymouth, reaching the quarterfinals. Since then she hasn’t done much match racing, and is currently without a position on the ISAF World Ranking. That situation will definitely change if she continues the Buddy Melges Challenge on Lake Michigan in the same way she’s started the event.

“Some parts of today’s racing were feeling really natural, while other parts didn’t. We made some big match racing mistakes, real presents for our opponents,” Groeneveld laughs and shakes her head.

In Wednesday’s seven matches the Dutch team was only defeated once. Despite a red flag penalty in the match against Anna östling, for taking room she wasn’t entitled to at the top mark, Groeneveld continued her fierce fight. All the way to the finish line she and östling raced on in their head-to-head battle, narrowly won by the Swedish boat at the end.

“We had rather big waves and excellent surfing conditions, so the finish came down to who got the last surf. This time we were fortunate,” östling analyses the outcome.

Local hope Stephanie Roble was challenged by the sailing conditions, with 10 to 15 knots of quite steady breeze and waves enough to get the big surfs, all under a bright sun from a clear blue sky.

“We haven’t done any match racing since the latest WIM Series event in Sweden more than a month ago, so we have to get back into the groove and get into the Elliotts again. Today it was tricky driving conditions with the big waves, and we struggled a bit coordinating our crew work. The matches were close but we lost two. Now we’re looking forward to learning from today’s lessons and continuing racing tomorrow,” the American World #3 says.