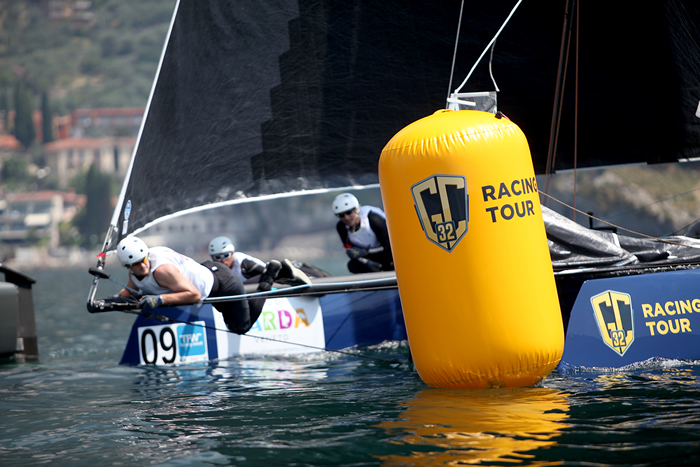 After two exceptional days of racing in 15-20 knot winds at the GC32 Malcesine Cup, Lake Garda was in lighter mood today, with the southerly Ora mostly failing to reach 8 knots.

This event, the second of the 2016 GC32 Racing Tour, is running alongside Foiling Week, an annual festival of all foiling boats held in Malcesine. Today the GC32s joined in Foiling Week’s ‘long distance race’, an 20-mile long lap of Lake Garda with a weather mark set off Campione on the west side of the lake, before returning to a leeward mark half way up the lake between Malcesine and Riva del Garda, then returning to the finish off the event host club, Fraglia Vela Malcesine. For the GC32 Racing Tour, this race was non-scoring.

While GUNVOR Sailing was looking strong on the first leg, as the GC32s short tacked along the steep cliffs on the west side of the lake, Orange Racing, the new campaign of GC32 founder Laurent Lenne, was punching above her weight, up among the front runners (in the GC32 Malcesine Cup’s ten boat fleet, Orange Racing was ninth overall going into today’s racing.)

Unfortunately by the time the GC32s reached the windward mark, it was in the middle of a wind hole. A game of snakes and ladders ensued to try and reach it.

Orange Racing and GUNVOR rounded simultaneously in the lead, but then it was Lenne’s team that made great gains on the west side of the course as GUNVOR went hunting pressure on the lake’s eastern, Malcesine side. Orange Racing’s strategy paid handsomely, keying into her own personal breeze. As the wind filled in across the northern end of the race course, Orange Racing was able to win the coastal race by a substantial margin over second-placed Team Tilt, that had managed to overhaul GUNVOR Sailing in the race’s latter stages.

An extremely satisfied Lenne observed: “We gained the lead on the shore and we kept on going back into the shore. But it was about going out into the lake at the right time. We had good communication on the boat, it was a group effort.”

While Lenne is originally French and resides in Amsterdam, on board Orange Racing, his crew here is a mix of Dutch and Brits, including British former Tornado Olympic sailor Hugh Styles, standing in for Dutch Laser sailor, Nicholas Heiner, who is recovering from injury.

As GC32 founder, Lenne is pleased that for Malcesine the GC32 Racing Tour has reached double figure fleet numbers (due to increase to 11 for the next event, the 35th Copa del Rey MAPFRE in August).

With the coastal race completed, the GC32 Racing Tour returned to its more familiar race format. While one race was started, at the leeward gate the wind turned inside out then disappeared. Principal Race Office Anne Malledant wisely cancelled the race and, soon after, with conditions showing no sign of improvement, sent the boats in.

Going into the final day there remains a one point fight for the lead between the Swiss Team Tilt and Franck Cammas’ NORAUTO. The top four remain in contention with GUNVOR Sailing currently third and Jason Carroll’s Argo fourth. They hold a 20 point cushion over fifth placed ARMIN STROM Sailing Team of GC32 Class President, Flavio Marazzi.

On board ARMIN STROM is the GC32 Racing Tour’s sole female crew, New Zealander Sharon Ferris-Choat. “It’s awesome, I’m absolutely loving it,” says Ferris-Choat, a former Olympic and round the world multihull sailor, of GC32 racing. “The biggest thing to get used to is the change in the velocity of the wind when calling the tactics, because of the huge angle variations and the speed that everything changes. But we’re getting there.”

To make up for today’s lack of racing, the race committee is looking to start at 0830 CET tomorrow, the final day of the GC32 Malcesine Cup, to make the most of the northerly Pelèr wind that typically blows at that time.