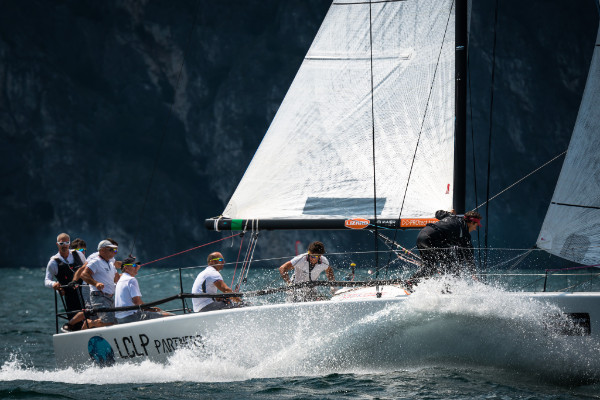 The second day of racing in Riva del Garda at the 2016 European Melges 32 Championship gave way to competitive conditions and more fun sailing. Atop the charts is Vincenzo Onorato's Mascalzone Latino still commanding first overall, yet now tied in points with Richard Goransson's Inga From Sweden in second. Goransson advanced from fifth overnight to second after processing three additional races (2-4-3), ultimately evening up the score with Onorato.

Norway's Lasse Petterson on Pippa had an awesome day, moving up a spot to now sit third.

Once more, three additional races produced three distinct winners, further proving that the one design Melges 32 is by far the most competitive and fair, grand prix fleet racing on the planet. The rides downwind today were incredible. Be sure to check out all the videos on the Melges 32 Facebook Page for some exhilarating footage!

Claudia Rossi, the only lady helm on the course and called in at the last minute as relief due to owner Fritz Homann being injured on practice day, shot out of the blocks in a major way. An incredible 1-2 start gave this team a leg-up in the competition as they now sit in fifth place and only one point away from podium contention.

Petterson rocked Race Five for the win, with Rossi/Homann keeping things in check to take second followed by Pavel Kutznetsov aboard Tavatuy having a nice third place finish.

The final race of the day went to Matteo Balestrero's Giogi. Andrea LaCorte aboard Vitamina exercised a welcomed change of pace to finish a satisfying second, while Goransson finished out the top three and Petterson came fourth. Christian Schwoerer and his La Pericolosa Melges 32 claimed fifth.

Day Three will prove to be quite exciting as only four points now separate the top five positions. Saturday marks Day Three of the European Championship in Riva, and with discards now in play, hard core sailing and spot on tactics will be key.