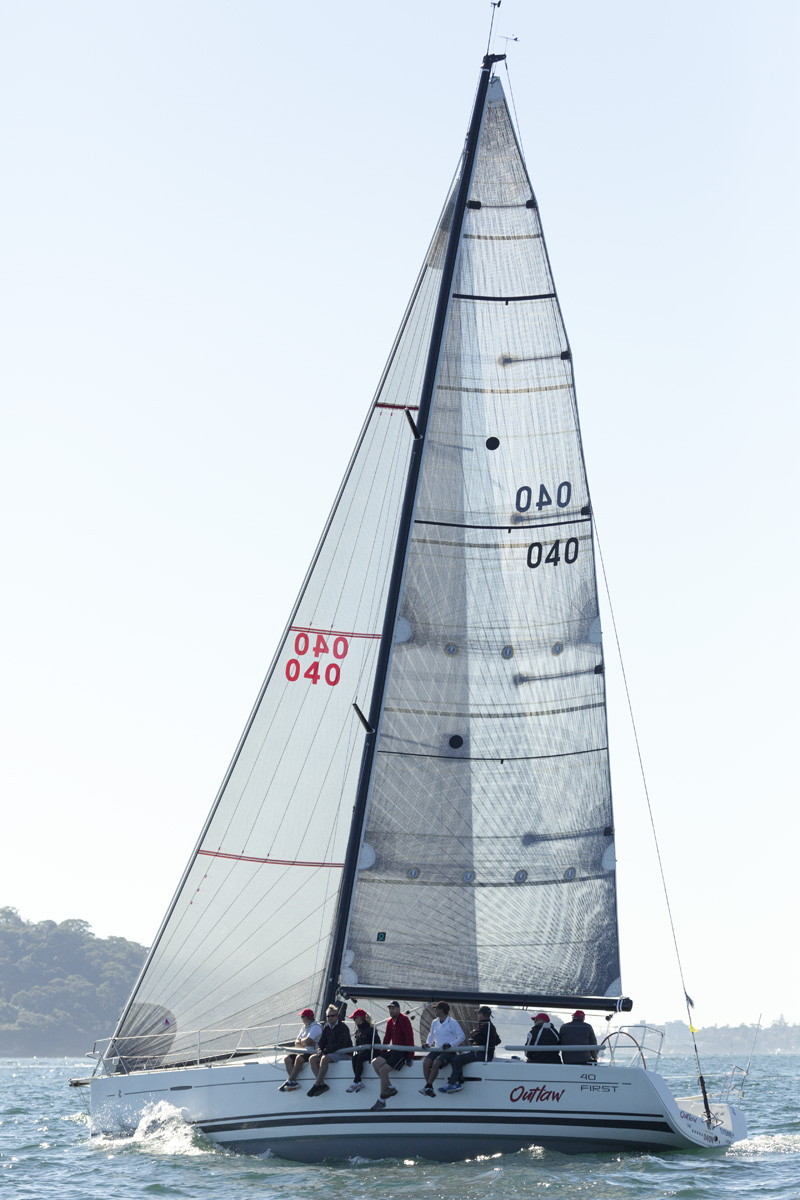 Outlaw outsailed all in Division B - credit David Brogan www.sailpix.com.au.

The sun was out, but the breeze was light to nothing again, almost a carbon copy of last week’s race, as yacht owners in the Cruising Yacht Club of Australia’s Land Rover Winter Series fought their final battles for overall pointscore division wins.

Alan and Tom Quick lived up to their surname to win the race and clean up Division B by nine points to Howard Piggott’s Beneteau F40, Flying Cloud, after the latter finished second in the final Race. Just one point behind Flying Could, for third overall, was the ever-competitive Adrian Van Bellen and his J/122, Jackpot.

The Quicks and their Beneteau F40, Outlaw, won Race 10 by a minute to their sistership. The father and son have been tag-teaming through the series, and it was dad, Alan, who had the pleasure of claiming the double victory, as Tom was arriving back from a skiing trip.

“We’ve been having a go at it for so long – like everyone else. You just keep hacking away,” Alan Quick said. And that was before he discovered Outlaw had been drawn to win the Noakes prize of a lift stand launch and two free lay days, donated by the Noakes Group.

“We have a good consistent crew who work well together, they deserve the praise,” added Quick, adding: “We all drifted for the first two hours, but we made good tactical decisions, taking the south side of the Harbour, creeping along to Manly, doing our level best.

“Running back from Manly was a soldiers course, after the day started with a weak westerly, a north-easterly filled in on the way back, with a top strength of 8 knots. Every started moving at once, so we couldn’t make any more gains.”

Brian Carrick, winner of Division F with Peach Teats-Velocity, a Beneteau 31.7, was in the same situation to Outlaw, never having won the series before.

“It’s fantastic after trying for 10 years. We’ve finished second and third before, but never won,” said Carrick, who earlier in the year won PHS Division 2 of the Grant Thornton Combined Ocean/Short Ocean Pointscore.

“We’re over the moon, because we deliberated on whether to race or not. We had enough points already, and I was worried something could happen to cause us to be disqualified, but I didn’t want to look like a poor sport, so out we went.

“As happens, we got dragged towards a restricted Naval area and couldn’t do a thing about it, so I said ‘OK, let’s be smart, we’ll retire, let’s not risk it,” said Carrick, adding that his New Zealand sponsor, Peach Teats (makers of artificial feeding teats for calves) were thrilled.

Division J1 winner, Shaaron Walsh, with her NS369, Trim, said it was a nerve-wracking day, but she finished the race fifth to claim the division win from Steve Hatch’s Sydney 36 cruiser/racer M, by just four points when M won the race.

“I must have read at least 10 forecasts, hoping it for a better one. This sort of weather makes it more challenging, but then that’s what we love about the winter series. It’s a great series.

“I was also nervous when I saw the forecast because we’ve had such close duels with Libertine (Benjamin Morgan) and Hanni (Mike Hesse) and in light air anything could happen,” commented Walsh, who need not have worried. Libertine finished the series third overall after their final race fourth, while Hanni was fourth overall after a seventh place.

“The whole crew enjoyed every bit of the series. I have to thank my crew; they were so good all season. I also want to thank everyone involved; they do such a good job. I especially would like to thank the crew on the water – the race management team and those who run around in Red Duck laying the course. They all work so hard for us,” Walsh said.

One spectator at Rose Bay said the breeze died right before the start. When the boats slowly trickled up the Harbour towards Vaucluse, then stopped, he said it was like looking at a picture of boats on the Harbour, they were so still.

Stephen Trevillion (Online) won Division C today and was the lucky person drawn to receive the use of the Land Rover Evoque experience for one week.

Even though the pointscore component of the Land Rover Winter Series is finished, yachties have one more chance on the water next Sunday, when the final Ladies Day race for the Chris Lee trophy, which also decides the overall winner of that three-race event, is sailed.