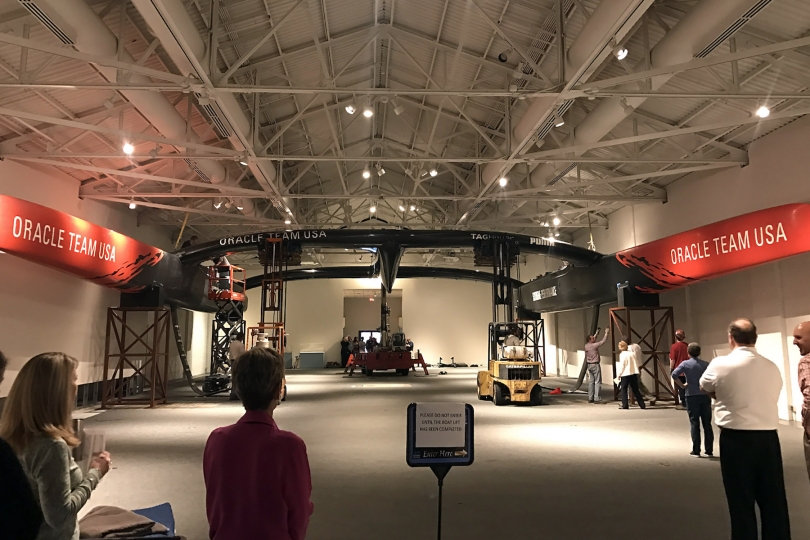 It was the boat that powered one of the greatest comebacks in sporting history and soon you can visit it at America’s National Maritime Museum, The Mariners’ Museum and Park in Newport News, Virginia.

“USA 17” was ORACLE TEAM USA’s AC72 catamaran that raced in the 2013 America’s Cup in San Francisco. With the defending champion on the ropes, down 1-8 and facing match point, the team turned it around and won eight consecutive races to win the America’s Cup over Team New Zealand 9-8.

Now the boat the team designed, built and raced in that storied comeback has a new home, at The Mariners’ Museum and Park, as the centerpiece of a new exhibition – Speed and Innovation in the America’s Cup.

The storyline of this exhibition is dedicated to reliving ORACLE TEAM USA’s amazing comeback in the 34th America’s Cup and what it took to develop, design, build and race the AC72 catamaran.

“To win the America’s Cup, you need to have a boat that gives you a chance on the water,” says ORACLE TEAM USA skipper Jimmy Spithill. “In San Francisco we designed and built the fastest America’s Cup boat in history. It took us a little while to figure it out, but once we realized the potential of “USA 17” we were confident we could win.

“This AC72 represents the pinnacle of America’s Cup – and American – technology and innovation at the time. The 2013 America’s Cup was the first foiling Cup, the first time the boats would lift out of the water on hydrofoils and fly.

“But already, the new boats we’re sailing now are so much more advanced. We’re still on foiling catamarans, but the technology has advanced by leaps and bounds. We’ve gone from fighting to get up and stay on the foils to the point where we can fly around the entire race course, including through all of the maneuvers. We’re in a new era of sailing now and USA 17 represented that leap into the unknown.”

The 2017 America’s Cup will be raced in a new America’s Cup Class, 15 meter (49.2-feet) foiling, wing-sailed catamarans. The change to the new class of boat meant the winning boat from 2013 needed a new home.

“We’re thrilled to be able to contribute to the Mariners’ Museum by donating “USA 17” for this exhibition,” said Grant Simmer, the General Manager and Chief Operating Operator of ORACLE TEAM USA. “The story behind this boat and the comeback in 2013 is one that deserves to be shared widely, and we’re happy to be in partnership with The Mariners’ Museum to help educate people about the America’s Cup and the technology and human achievement that is the cornerstone of the event.”

Speed and Innovation in the America’s Cup will bring the excitement of the America’s Cup to The Mariners’ Museum and Park, which draws visitors from across the nation and the globe. Visitors will enjoy an engaging and immersive experience as they explore the science and technology behind the fight to win the oldest trophy in international sport.

The Mariners’ Museum President & CEO, Howard Hoege, said this about the exhibit, “ORACLE TEAM USA has given our Museum the opportunity to provide the hundreds of thousands of people that will visit this exhibit over time an experience that they can get nowhere else: standing underneath the actual AC72 platform that won the 2013 America’s Cup. I cannot wait to see our visitor’s imagination take flight as they come into contact with the sleek, elegant – and MASSIVE – USA 17.”

The exhibition opens on May 27, the same week that racing gets underway in the 2017 edition in Bermuda where ORACLE TEAM USA sails its first race in the Louis Vuitton America’s Cup Qualifiers on May 26.

“The donation of this extraordinary yacht to the Museum’s collection, greatly enhances our capability to relate current and exciting stories about the America’s Cup, and about the progression of maritime technology for years to come. It’s truly awe-inspiring to walk into the gallery and experience this boat.” said Lyles Forbes, the Museum’s Vice President of Collections and Chief Curator.

In addition to showing the 2017 America’s Cup races from Bermuda, there will be various interactive pieces throughout the exhibition, inviting visitors to learn more about the event and what it takes to be a sailor in the America’s Cup, including:

• An activity table with the various materials used in the construction of the AC72 catamaran;

• A grinding station, and;

• Thirteen videos exploring the history and technological advances of the America’s Cup over the past three centuries, including ORACLE TEAM USA’s comeback win in 2013

ORACLE TEAM USA is a two-time winner of the America’s Cup, having first won the event in 2010 in Valencia, Spain. In San Francisco, the team needed to win eight consecutive races to retain the trophy, marking one of the greatest comebacks in international sport. www.oracleteamusa.com

The Mariners' Museum and Park connects people to the world's waters because through the waters – through our shared maritime heritage – we are connected to one another. The organization is an educational, non-profit institution accredited by the American Alliance of Museums and preserves and interprets maritime history through an international collection of ship models, figureheads, paintings, and other maritime artifacts. The Mariners’ Museum is home to the USS Monitor Center, and is surrounded by the 550-acre Mariners’ Museum Park, the largest privately maintained park open to the public in North America. The Mariners’ Museum Library is the largest maritime library in the Western hemisphere. The Mariners’ Museum has been designated by Congress as “America’s National Maritime Museum.”