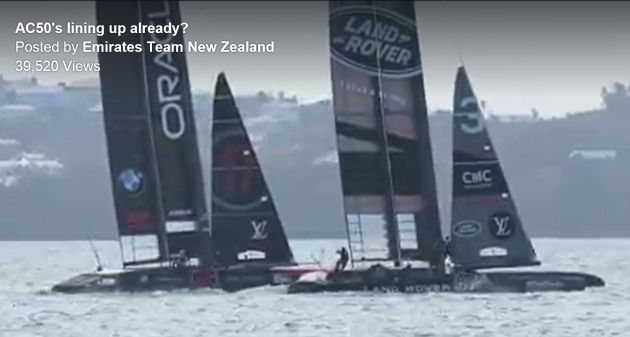 It wouldn't be the America's Cup without controversy and accusations from one team that another team is cheating. As usual, it is Team New Zealand that is pointing the finger and claiming the other five teams are ganging up on them. ETNZ boss Grant Dalton sounds like a broken record with his “us against them” rhetoric and for the most part we have heard it so often we no longer bother to publish his paranoid ranting.

However, he actually has a point when he complains about a recent rule change that is seeing teams racing their America's Cup Class boats against each other in Bermuda.

As Kiwi journalist Dana Johannsen points out in the article below, it was always the intention of the organisers that teams could indulge in practice racing during specified windows. However, the America's Cup Event Authority dropped the ball and forgot to specify the time frames for those windows of opportunity. To correct their oversight, they have amended the rules – something they can easily do with five of the six teams in agreement.

For once Dalton's cries of “foul” are somewhat justified, although they simply correct an oversight. We do hope he tones it down and lets his excellent sailing team do the talking on the water.

Here's the beginning of the story by Dana, with a link to the full text at the end:

America's Cup competitors have forced through another retrospective rule change, granting teams the ability to size up one another on the water, before official racing starts in May.

The protocol amendment, which was posted on the official noticeboard earlier this week, allows teams to race in an organised fashion at the Cup venue in Bermuda during nominated windows over the next two months.

The first window opened today, and Oracle Team USA and close allies Ben Ainslie Racing wasted little time in taking advantage of the rule change engineered by their own leaders. The two teams lined up against one another on Bermuda's Great Sound earlier today.

The original protocol stated competitors could only sail their America's Cup Class (ACC) yachts in a co-ordinated manner with another team during periods specified by the commercial director.

The rules stipulated the dates must be published no later than one year prior to the first scheduled race. However, America's Cup organisers dropped the ball and neglected to publish any dates last year.

“The effect of all of this for the fans is positive,” the release state. “The unknown performance between teams will only add to the intrigue of how each team compares to each other on the first reach of each match up together.”

The failure to publish the dates proved only a small hurdle for Oracle Team USA and the Bermuda-based competitors, however, with the rule change forced through by majority decision.

Click here to read the full story at the NZ Herald.