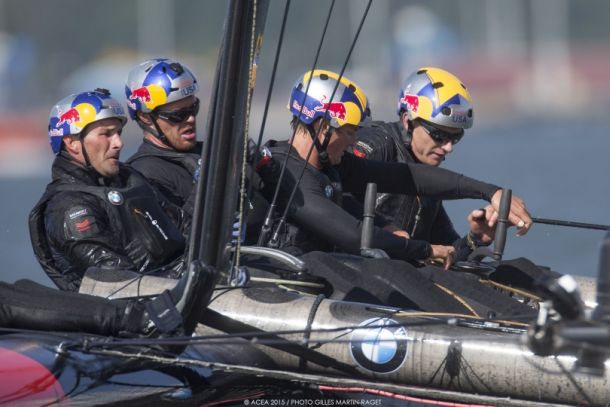 ORACLE TEAM USA will race in the Louis Vuitton America’s Cup World Series Bermuda with the same crew that earned a second place finish in Gothenburg, Sweden in August.

“We’re going with the same line-up as last time,” confirmed skipper Jimmy Spithill. “We had a long list that we've worked on with Philippe since Gothenberg, and want to put that into play in Bermuda.

“We had a third in Portsmouth, a crew change for Sweden with Kinley Fowler's broken hand and improved to a second, and with the restriction on training time, we decided to stick with the same group. We’ll get into a regular race crew rotation next year.”

“We’re fortunate to have a very strong sailing team with a lot of depth. We have talent across our entire group. The crew on board is a good representation of that. But I’m also confident we can sub in any of our guys if we need to for injury or illness.”

Louis Sinclair, Graeme Spence and Ky Hurst are three new additions to the sailing team who bring a physical element that will be necessary on the new America’s Cup Class boats in 2017, as well as the AC45S test boats the team is developing.

“All of the new guys fit in very well. Louis, Graeme and Ky are really leading the charge pushing and stepping up the physical side within our group which challenges the rest of us.”

The Louis Vuitton America’s Cup World Series Bermuda is the first official racing in the home venue of the 35th America’s Cup. As the defending champion and the first team to establish residency on the island, Spithill says ORACLE TEAM USA is looking at Bermuda as its home waters.

“For sure we view this as our home event,” the skipper says. “We would love to do well here. We approach every event to win, but this one especially. We’re in front of our family and friends, not to mention all the Bermuda public who have welcomed us to the island. We want to put on a good show.

“But it won’t be easy,” he says. “You only need to look at a top team like Artemis currently at the back of the leaderboard, so it shows how hard it is. There are no weak links in this group of teams. As always it will come down to the last race on Sunday.”

Racing in the Louis Vuitton America’s Cup World Series Bermuda is on October 17-18. Teams are allowed just one free training day on October 15 and one day of official practice racing on October 16.