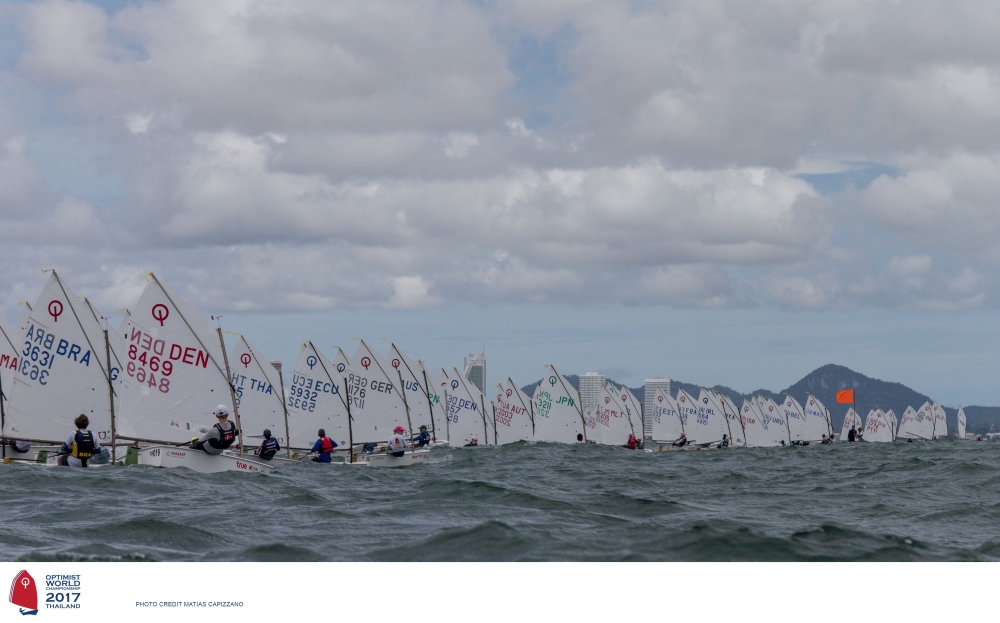 Pattaya, Thailand: Top youth sailors from the 62 countries participating in the Optimist World Championship 2017 took to the waters off Pattaya in a long-awaited start to what will be eight days of competition.

Excited and focused on doing their best, they had to contend with a strong tide, unfamiliar conditions for many, and a sudden rainstorm that closed the day.

A steady breeze of 7-10 knots held throughout most of the afternoon, but a strong tide coming from behind pushed many boats over the start line, resulting in several general recalls for the first two of four fleets, and the calling of a black flag start for the Blue Fleet. As the tide changed, the start line needed adjustment, delaying a few starts.

For the second series of races of the day, the tide swung around, resulting in some smooth starts but ultimately proving to be a determining factor on the finish line for some.

While coaches described the racing as “fair”, the weather did not play fair to the final fleet race of the day. A short-lived tropical rainstorm moved in on the Green fleet, winds whipping up past 20 knots for five minutes, whisking eight sailors over the finish line in heavy rain, then stopping.

Near the finish line, one young sailor reportedly within a boat length or two of a top ten finish suddenly found himself and the rest of the fleet drifting backwards. Twenty minutes later, the race was declared over, only twenty one sailors having been able to finish before the tide, which one coach described as “like a river”, took control of the situation.

Thai national coach Somkiat Poonpat said conditions were quite different from those during pre-event training, with the tide moving in a different direction, proving challenging to all, not just the international sailors with little experience in such conditions.

Provisional results released late Thursday show two Thais and three Chinese in the top ten after two races. With several more races to be sailed, these results should not be seen as a predictor of final results, only the sheer determination and talent of sailors from both Asian countries to succeed.

Speaking about the Thai team’s performance, coach Somkiat said, “All did well on the start line and handled the oscillating wind very well. I believe all can make it to the top because we trained very hard and they know what to do.”

It is just the beginning of a week of highly competitive racing at the world’s most celebrated youth regatta, which sees a record-breaking 281 entries from 62 countries this year. Another two days of qualifying races are scheduled before sailors will be split into gold, silver and bronze fleets based on rankings. At that time, the battle for the four trophies on offer will heat up.

The 2017 Optimist World Championship is organized by the Royal Varuna Yacht Club with the endorsement of the Yacht Racing Association of Thailand and the Junior Sailing Squadron of Thailand under the International Optimist Dinghy Association.

This Championship is supported by strategic partners including Pattaya City, the Sports Authority of Thailand and the Thailand Convention and Exhibition Bureau. Co-sponsors include The Pizza Company, Apollo (Thailand), Thai Airways, and True Corporation.