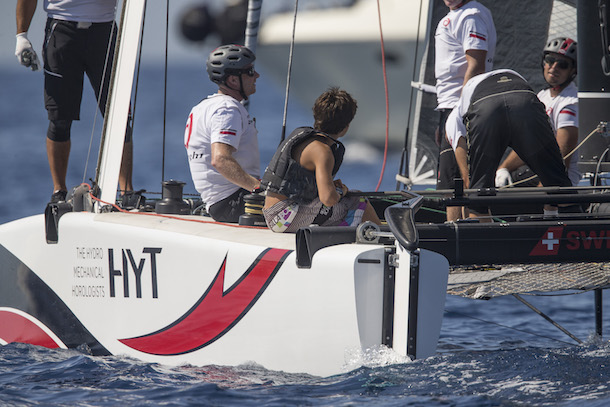 Day two of the Bullitt GC32 Racing Tour’s Trofeo di Roma will be one that organisers, Italian promoters and sailors alike will be pleased to put behind them. Despite occasionally threatening to do so, the wind never increased above 3 knots. As a result, there was a long wait for the breeze to come good (which it never quite did) first ashore and then with the GC32s out on moorings off Civitavecchia’s beach.

“Today there was a big fight between the gradient and the sea breeze,” explained Principal Race Office, Anne Mallédant. “It was very tough. The gradient began to build, but we were in the middle and we never saw more than three knots. I want to set fair races and in these conditions it would not have been fair.”

Instead Mallédant laid on two short, single-lap, non-scoring Pro-Am races, the first getting away at 1545 CET. These were ultimately won by Sebastien Rogues’ Team ENGIE and the Leigh McMillan-steered Sultanate of Oman.

Experiencing general frustration all round, teams treated the day differently. Despite the lame conditions, Team ENGIE spent it valuably, bonding as a team after bringing on board two new crew in Mathieu Souben and Olivier Herledant for this week's Rome regatta. “It was good for us, because it is the first time we’ve sailed together and it is important for us to grow together. Doing a race like this is perfect for us,” explained skipper Sebastien Rogues. “We will see tomorrow if today’s training was any good or not.”

Conditions were ideal for Ernesto Bertarelli’s Alinghi team, having competed successfully for more than two decades in the often ultra-light conditions found on Lake Geneva. However in today’s non-scoring races, they weren’t taking matters too seriously. During the long wait they picked up some young sailors from their Optimist dinghies and gave them a chance of a lifetime – to sail on board Alinghi’s state of the art GC32 catamaran. One stayed on board for the duration of a race. “I think he enjoyed it!” said Californian Morgan Larson, who is helming Alinghi here in Civitavecchia. “We let him drive and trim and put him to work. Then the wife of Pierre Yves [Jorand] steered one race from start to finish and it was our best race!”

As to what will happen tomorrow – looking at the forecast this week seems value-less. “Normally we should have two knots more than yesterday and I hope that the sea breeze can establish from the west. Let’s hope we have a good day,” concluded PRO Anne Mallédant.

Six races are scheduled tomorrow (Saturday) with a first warning signal at 11:30.