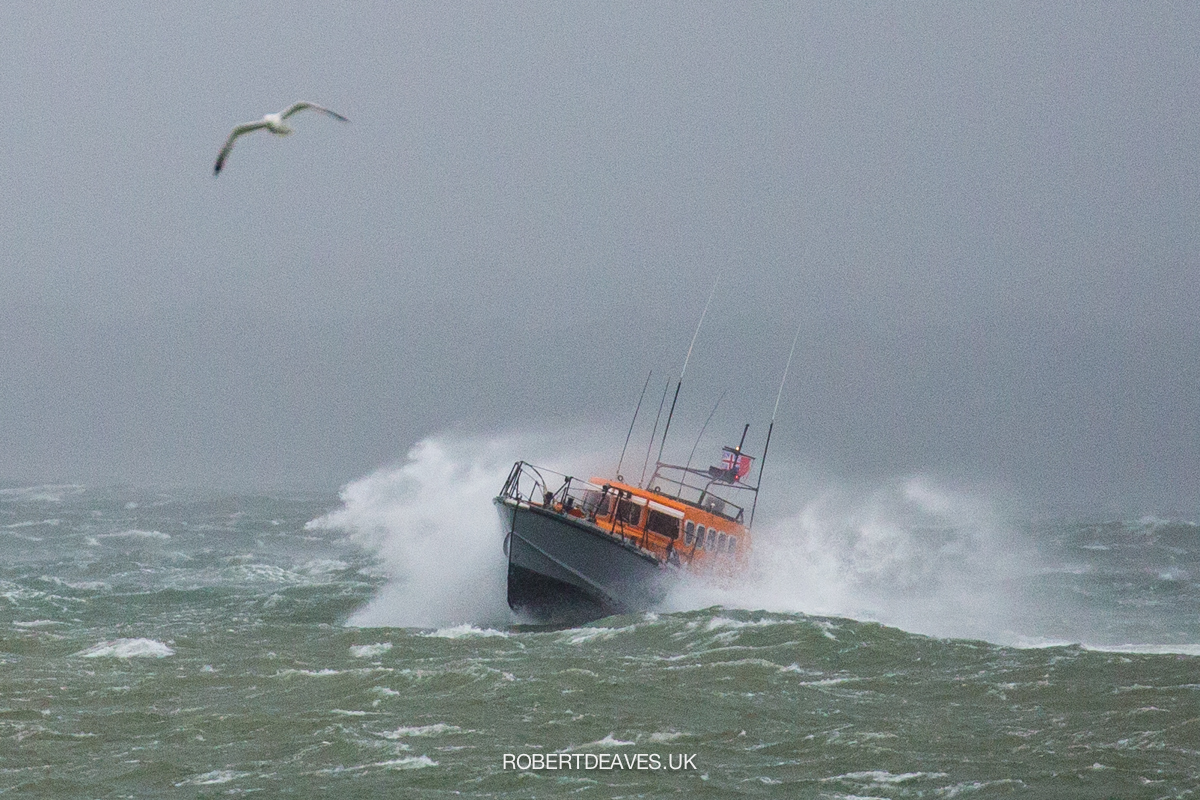 Friday’s opening day for the Fast40 Class in the UK was called off, with average winds of 40 knots sweeping through the Solent, but Saturday’s forecast is much better while Sunday should start with moderate winds, increasing through the day.

Established in 2016, the Fast40 Class was becoming one of the most exciting UK based race circuits until the pandemic reeled in some of the growth, however, there is renewed optimism in the fleet, with those able to sail looking forward to the first event of the 2021 Race Circuit this weekend in Cowes, as part of the RORC Vice Admiral’s Cup.

It’s also the first chance for many boats to test their winter modifications, in a class renowned for close and very competitive racing.

Five teams will sail this first regatta of the year. Two more teams remain stuck outside the UK in Holland and Sweden, while an eighth boat, Arabella, will start sailing from Cowes Week onwards.

All of the crews are just happy to be back on the water.

Racing is set to commence at 10.30 on Saturday with three windward-leeward races followed by a Round the Cans race.

Tim Powell, team manager for Rán, said, “After a long winter of lockdowns I think everyone is incredibly excited about being back out on the water racing again. It’s looking like we will have a full series so we can get to enjoy these awesome boats.”

Rán is perhaps the only boat without any major modifications this season, but has done some crew changes.

“We haven’t done any major mods to the boat for this year. The electric engine, which was new for last year, has been out and inspected. As it’s such new technology we wanted to be extra cautious but happily it was 100% ok.”

The class has a strict owner/driver principle, with only five of the 11 crew allowed to be professional.

“Our crew has had a few changes. We sailed with 10 last year and this year we are back to a full crew again. We have tried to mix it up a bit and be progressive in involving girls and youth onto the boat. Opportunities to get on a Fast40, or any grand prix boat, are limited so we are very happy to be leading the charge on this.”

Ed Fishwick’s Redshift has made some major changes over the winter, targeting improved offshore performance.

Working with Farr Yacht Design, Fishwick said, “We made some quite big changes, to optimise the boat’s IRC rating for offshore races. It’s the Fastnet year so the focus is on that. We are not sure how it will work inshore.”

The main change is that “We added 450 kg water ballast and have modified the keel, which is now shorter and lighter, so that the overall righting moment is the same.

“We have also reduced the sail area a bit, so we are rating 12 points lower than last year, when we were at the top, and now we are at the bottom, all with a view to improve offshore performance.”

Redshift took part in a short RORC Spring Series offshore race two weeks ago, but “It was very difficult to glean anything from that. This is the first regatta where we are fully functional and trained. So we’ll see how it goes. Our expectation is to come last on the water but it’s just a question of by how much.”

“It feels like a long time since we had normal racing, so to get back to it is always exciting.”

Owner, James Neville, “We have moved to twin rudders which is improving our heavy air and offshore performance. We also made the boat a bit more waterproof for our offshore campaign.

“It’s a pity about today but we are looking forward to getting back out for some inshore racing and a couple of around the cans races. We have enjoyed the training and getting out in a good breeze.”

In terms of crew, “We have quite a steady crew now this weekend. We have Tor Tomlinson on the boat in place of our youngster George Bridges. John Hunter-Hamilton, on the other hand, has not bothered with the growing up trend.”

Tokoloshe wins 2020 Race Circuit
On Friday evening, a drinks reception and prizegiving for the 2020 Race Circuit took place at the RORC Clubhouse, with Dave Bartholomew collecting the coveted trophy on behalf of Tokoloshe.

He explained how it came about. “Last season started weirdly because of COVID and so things started quite late and everyone was a bit tentative about getting going but we got five events in the end between June and September.

“We had a really good start on Tokoloshe, which was the key for us. I think we won the first 16 races we did, which was awesome. And that kind of carried through, and eventually Rán came back onto the scene which made it harder and they were very competitive.

“It ended up being a very close season, but Rán didn’t have enough races to beat us, so we beat them by one point, which was quite an excitingly weird finish to the season.

“It was actually a good year sailing wise, and I think the same will happen this year. A lot happened in the UK because of COVID and not being able to travel and it was actually quite fun. The series was good and very exciting.

“The cool thing is that we were involved in the Fast40s before it was the Fast40 class. We were the founding members along with Invictus and Rebellion, the first three boats, and I think we’ve had pretty much every position in the class. It’s not very consistent, but we’ve had all the slots from first to sixth, but now we’ve won it’s amazing.”