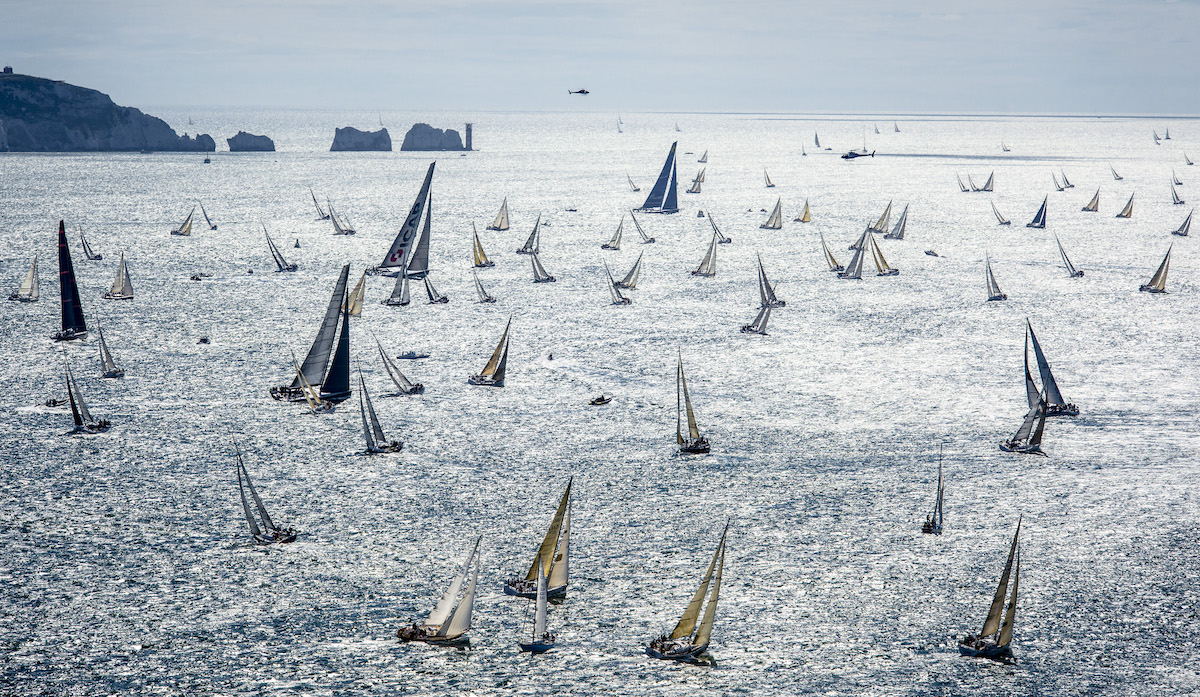 With 450+ yachts entered in this year’s 49th edition of the Rolex Fastnet Race, the Royal Ocean Racing Club’s biennial flagship event has consolidated its position as the biggest offshore yacht race in the world.

The 2021 Rolex Fastnet Race sets sail from the Solent on 8th August, back to its original position of the Sunday following Cowes Week, but with a new finish port. As usual, the course takes the boats down the south coast of England, between the Scilly Isles and Land’s End and across the Celtic Sea to the Fastnet Rock off southwest Ireland. The fleet then returns rounding Bishop Rock, to the west of the Scilly Isles. From here the course is new for 2021 with the finish port having moved from Plymouth, its traditional destination since the race’s first edition in 1925, to Cherbourg in northern France. This change increases the length of the race from 608 to 695 miles. Tactically it will place fresh demands on crews with a final hurdle of tackling the fast-moving currents of the Alderney Race before reaching the finish.

The change of destination for the Rolex Fastnet Race has been made by the RORC as Cherbourg’s Port Chantereyne is better able to accommodate the race’s enormous fleet. Bringing the world’s largest offshore race to France is also highly appropriate given France being the world’s leading nation for this genre of racing. It is home to events like the Vendée Globe, Route du Rhum, Solitaire du Figaro and Mini Transat, and French skippers having won the last two Volvo Ocean Races. French success has also extended to the Rolex Fastnet Race where in 2019 French yachts won nine of the 10 classes. Although the race was won overall by the American VO70 Wizard, overall IRC honours went to French yachts in the three editions before.

“Cherbourg is the perfect venue for the finish of the race,” comments Race Director, Chris Stone. “It has amazing facilities for competitors, berthing that allows us to grow and expand the event, plus the city is right on the doorstep of the race village. Of course, coupled with that is the enormous love for offshore sailing in France. That popularity brings interest and visitors to the city and the race village – it’s going to be amazing.” 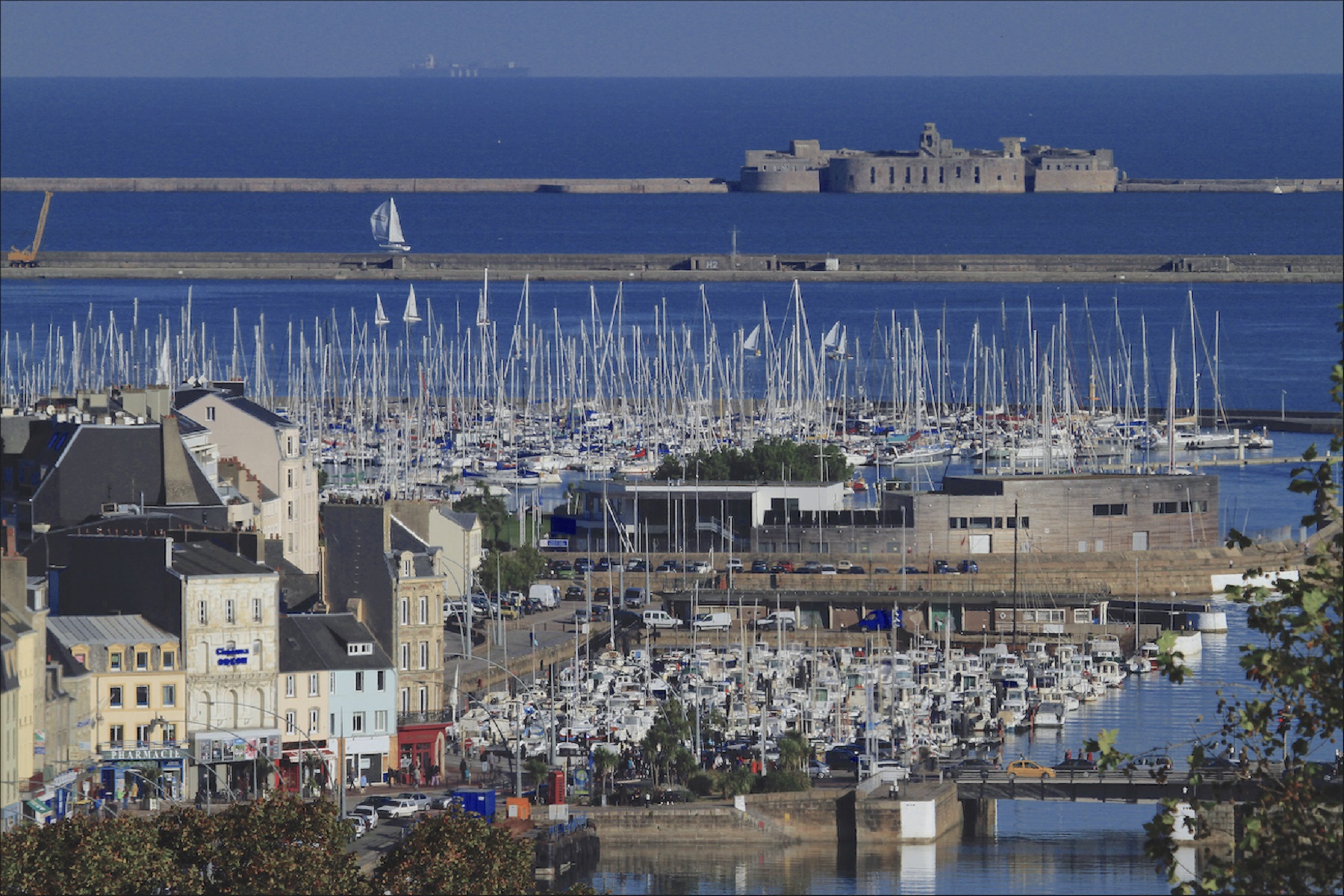 Most extraordinary about this year’s Rolex Fastnet Race is its huge fleet. Over the last two decades this has almost doubled in size, but the leap between the 2019 and 2021 has been the biggest ever, up to the present tally of 453 from 388 two years ago. And this is despite uncertainty brought about by the COVID-19 pandemic.

None of the world’s ‘classic 600 mile’ offshore races come close to this level of participation. The bulk is the IRC fleet competing for individual class prizes as well as the overall winner’s trophy, the Fastnet Challenge Cup. Over the last 20 years this has been won by yachts from all corner of the fleets, from the largest such as Charles Dunstone’s maxi NOKIA-Connecting People in 2003, to the very smallest and slowest, Jean-Yves Chateau’s 30-year-old Nicholson 33 Iromiguy in 2005, although over this period it has oddly never been won by a competitor in IRC Two. In 2013 the race had its first, and to date only, overall winner sailing doublehanded in Pascal Loison and his Figaro sailor son Alexis aboard the JPK 10.10 Night and Day.

Perhaps due to the Loisons success, along with the prospect of the sport going Olympic, doublehanded participation in the event has soared with 92 entered, up from 64 in 2019. The majority of these are competing alongside fully crewed teams within IRC Three and Four, classes in which today doublehanders dominate. Doublehanders are also classified in their own IRC Two-Handed class which this year includes several aspirant Olympians and notables such as Britons, Shirley Robertson, already a two-time Olympic champion and Dee Caffari, the world’s most capped female round the world sailor. Two-time Etchells world champion and Olympian, Stuart Childerley, with Kelvin Rawlings won the Two-Handed division in 2017, and Alexis Loison is back to defend his title in the class, sailing once again with Jean-Pierre Kelbert on the JPK 10.30 Léon, the latest model from Kelbert’s company. 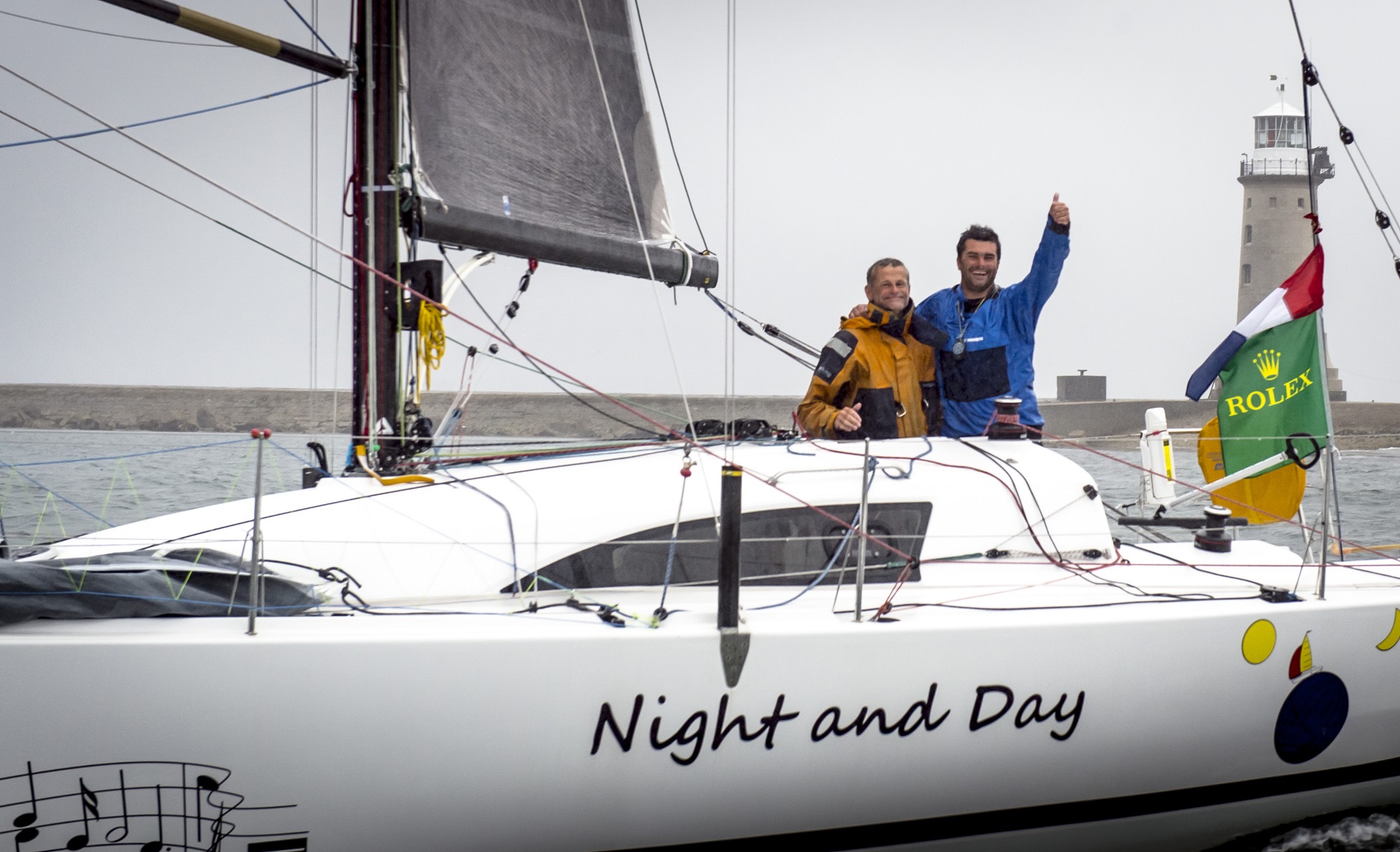 Most spectacular is the sheer array of yachts competing. Within the IRC fleet this includes some of the largest and fastest maxi yachts, such as George David’s Rambler 88, the defending monohull line honours champion, which this year is due to enjoy stiff competition from the brand new, foil-assisted Swan 125 Skorpios. They will be trailed around the course by several VO70, 65 and 60 former Volvo Ocean Race entrants.

The hottest competition is typically within the five principal IRC classes, the winner of each receiving a trophy such as the Hong Kong Cup for IRC Zero, the West Mersea YC Trophy for IRC One and other longstanding historical silver cups. The larger classes, IRC One to Four are further subdivided.

There is especially stiff competition between the one design classes. The largest of these are the 17 x J/109s and the 13 x First 40s. Then there are several more modern French models, notably the JPKs and Jeanneau Sun Fasts, which are popular due to their contemporary designs which have proved competitive under IRC. At present there are 11 x JPK 10.10 and nine 10.80s, 12 x Sun Fast 3200s, 14 x 3300s and 10 x Sun Fast 3600, the latter covering a wide rating range from Nick Martin’s Diablo with an IRC TCC of 1.030, to Stephen Berrzćs quicker Marco Polo at 1.052. Today these surpass in number old equivalents such as the Sigma 38 (five competing) or the three Contessa 32s racing for the Spangle Trophy.

Within the IRC fleet many past champions are returning – all of them French. These include Didier Gaudoux’s JND 39 Lann Ael 2 (2017 overall winner), Nicolas Loday and Jean Claude Nicoleau’s Grand Soleil 43 Codiam (IRC One 2009 and 2011), Nicolas Groleau’s Mach 45 Bretagne Telecom (IRC Canting Keel 2013 and 2015, second overall in 2019), Jacques Pelletier’s Milon 41 L’Ange de Milon (IRC One in 2019), Gilles Fournier and Corinne Migraine’s J/133 Pintia (IRC Two in 2017). As mentioned, Alex Loison is returning, while the 2015 winner Gery Trentesaux is racing in the Class40 aboard Antoine Carpentier’s Courrier Redman. 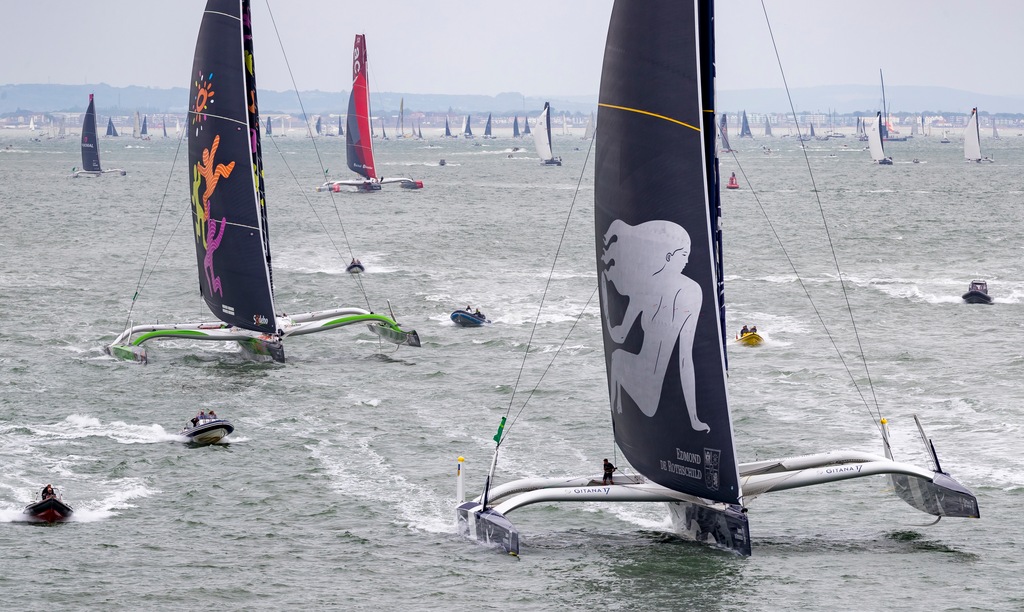 Several of the fastest offshore racing yachts in the world – the 30m long flying Ultime trimarans will compete.© ROLEX/Carlo Borlenghi

Compared to the world’s other ‘classic 600 mile’ offshore races, the Rolex Fastnet Race stands out in accommodating the impressive French grand prix classes, thanks to the races close proximity to Brittany where many are based. These include the fastest offshore racing yachts in the world, the 30m long flying Ultime trimarans. Among them famous names such as Maxi Edmond de Rothschild, skippered by Volvo Ocean Race winners Franck Cammas and Charles Caudrelier and Yves le Blevec’s Actual Ultim 3 (formerly Francois Gabart’s MACIF, currently holder of the singlehanded non-stop around the world record).

Well represented are the 60ft IMOCAs, which are famous for competing in the Vendée Globe. Among those entered are this year’s ‘two’ Vendee Globe winners: Charlie Dalin’s Apivia, which was first home to Les Sables d’Olonne, ultimately beaten when Yannick Bestaven on Maître CoQ was awarded time compensation from earlier in the race. It will be interesting to see the two boats of 11th Hour Racing, including a newly launched example for Charlie Enright who skippered Wizard, the overall winner of the 2019 Rolex Fastnet Race. Britain’s Alex Thomson is back with a newly refitted Hugo Boss.

Of the classes not rated under IRC, the most impressive is the Class40 which has 41 entered, up from 19 in 2019. Among those entered are Olivier Magre’s Palanad 3, winner of this year’s RORC Transatlantic Race and Valentin Gautier’s Voodoo, winner of the 2020 Normandy Channel Race, as well as Luke Berry’s Lamotte -Module Creation, Class40 winner from the last Rolex Fastnet Race. Of the grand prix classes this is also the most international with entries from afar afield as Japan (Hiroshi Kitada’s Kiho). The competition will be hot.

When it comes to offshore races there is no greater show on earth than the Rolex Fastnet Race. 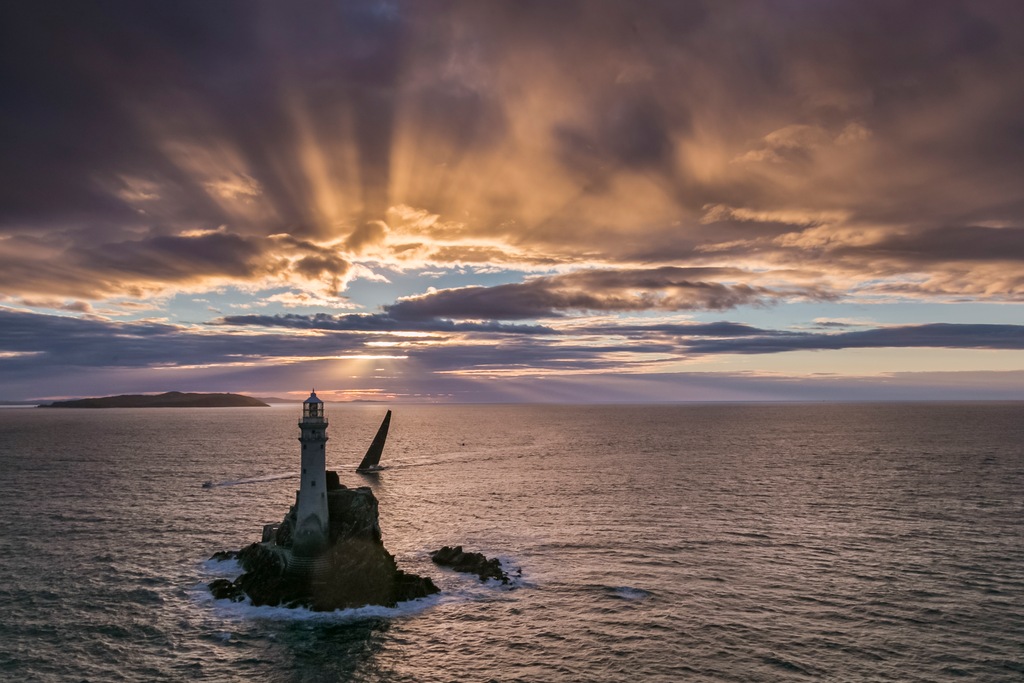