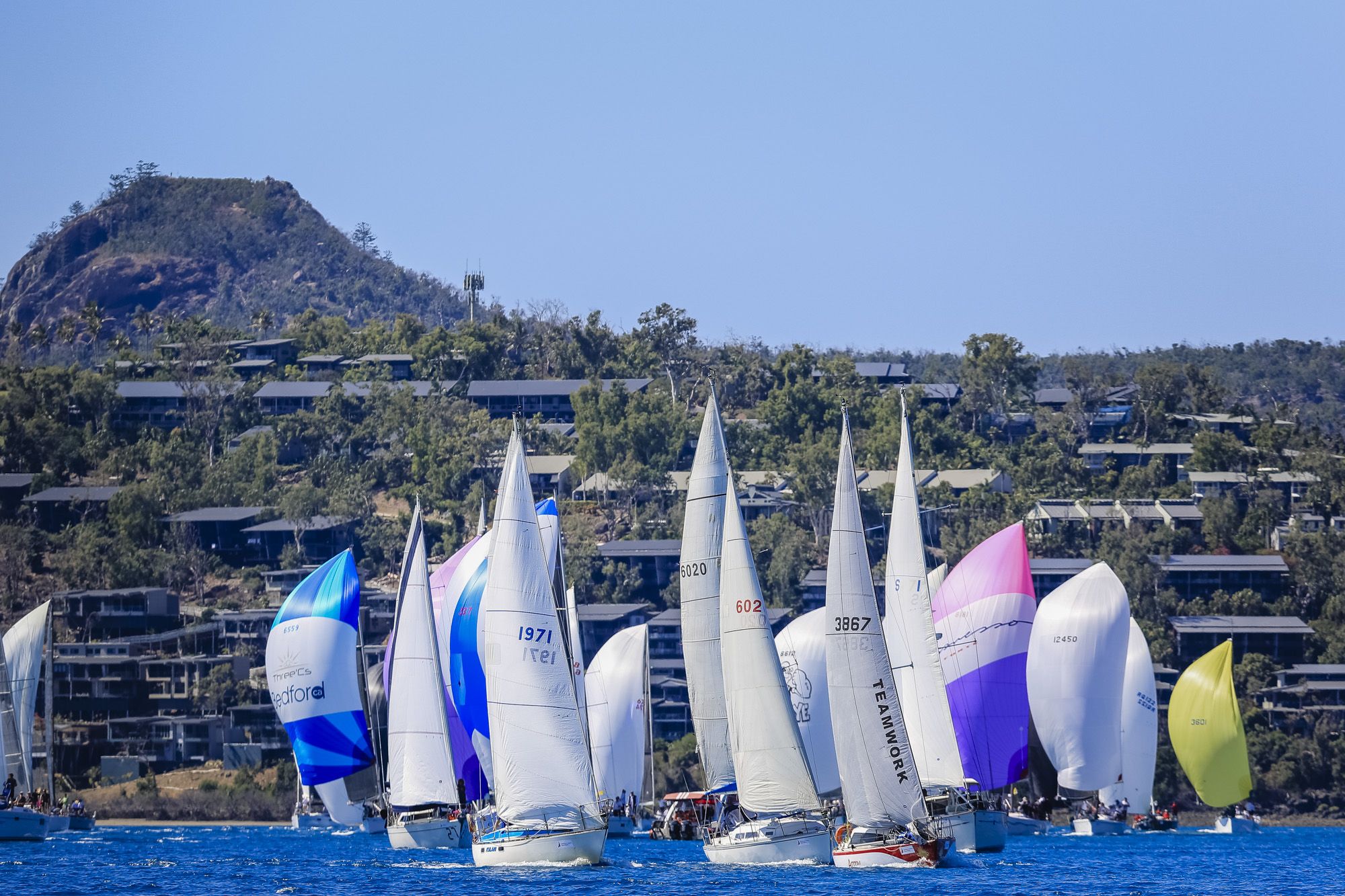 An unhurried start gave way to a magic opening race around the Molle Islands group for most of the 233 yacht crews contesting Hamilton Island Race Week 2018.

On the water, day one began quietly with all but IRC, Hamilton Island Division 1 and Multihull Racing divisions starting from Dent Passage. The first divisions beat painfully north from the start line in the fading remnants of an early morning nor’wester until early signs of the promised tradewind sailing arrived from the south. In no time kites were popped and the classic Dent Passage conveyor was carrying the fleet past Titan Island, out into the Whitsunday Passage and across to the Molle Islands.

The remaining divisions set off from the Eastern Course off Catseye Bay and the IRC fleet was soon converging with the cruising divisions and engaging in a series of gybing contests down Whitsunday Passage in 12 knots of south-easterly breeze.

The Oatley family’s 100ft Wild Oats XI got the better of Peter Harburg’s Black Jack by seven minutes over the line and first strike on corrected time between the warring TP52s from Sydney went to Matt Allen’s Ichi Ban from Marcus Blackmore’s Hooligan. Robert Vaughan’s eye-catching Muir 64 Van Diemen III was the division 1 winner of the inaugural Hamilton Island Class, an initiative of five new divisions at Race Week that seeks to level the field further for the highly diverse cruiser/racer fleet.

In the six-boat Multihull Racing division Dale Mitchell’s zippy Lombard trimaran Morticia enjoyed a convincing win, while Julian Griffith’s Extreme 40, The Boat Works, retired early with gear failure. Trimmer Max Marian said, “we were doing 24 knots downwind with the screecher and at the top end of Dent Island we busted our bow sprit when a lashing gave-way. We had a second sprit in Airlie Beach so now we are trying our hardest to change them over and get back to Hamilton Island tonight. There’s a bit involved.”

The race committee’s choice of a short islands race to the Molles to ease the fleet into Race Week was vindicated with all divisions enjoying an early afternoon finish, concluding with the hallmark cross-tacking silhouette for the final beat into Dent Passage.