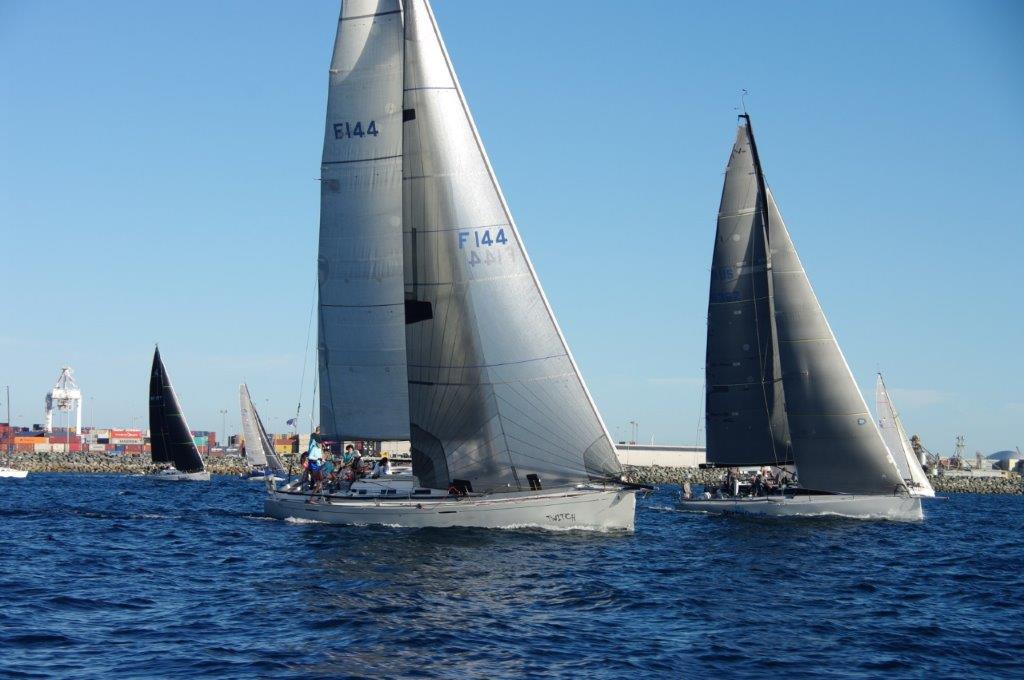 Twitch and Dirty Deeds race away from the start area. Photo Susan Ghent.

While many are still recovering from tragic events of the 2018 race, the 71st Bunbury and Return Ocean Race will be remembered as one that helped in the healing process for the offshore community in Western Australia.

To commemorate the 70th race, yachts took part in a sail past prior to the start. It was a beautiful scene of power craft holding position close to Port Beach in North Fremantle including several classic power yachts. Three vintage planes added to the atmosphere, a Tiger Moth (DeHavilland), Yak 18 and a Foxbat. A nice connection to the days prior to radio communications when aerial surveillance was carried out to ensure the competitors were travelling well during the 170 nautical mile race and to bring back news of their progress to the followers ashore.

The Royal Freshwater Bay Yacht Club race began at 1730 in a very gentle sea breeze with the planes conducting a final flying salute as the yachts sailed across the start line. Many of the power vessels followed to the first marker and watched as they headed out to sea in the light breeze.

Earlier in the day, race record holder Indian, the Carkeek 47 owned by Craig Carter had to withdraw from the race. The yacht had suffered damage to their bow sprit during the Rockingham Race Regatta. With the yacht and crew ready to race, and eager to fit their new part, it was collected from the airport and brought to the boat only to be unwrapped to find that it was incomplete. Not a simple installation, the devastated team took their families aboard Indian and ventured out to support the race start and acknowledge “old friends”.

It was slow going for the fleet through Friday evening with very little wind. Ian Clyne’s J122 Joss decided to head offshore in search of wind and they were joined by Obsession, the MAT 1245 owned and skippered by Paul Arns. Twitch was a surprise leader and managed to stay ahead of Dirty Deeds and Al Fresco for most of the way to Bunbury. The Beneteau 44.7 team sailed very well and owners Barry and Betty Walsh were excited to have been a race leader for some part and pleased to finish 5th over the line in the end.

Inshore, Huckleberry had a game plan. Phil Somerville-Ryan and his team decided to take their S&S 34 in as close to the beach as possible hoping for some breeze off the shore. Atomic Blonde followed alongside, the two Royal Perth Yacht Club rivals sticking together.

Before the 2315 sked, the radio announcer broadcast a moving tribute to Rob Thomas and Paul Owens who were tragically lost when their yacht Finistere overturned during the 2018 race.

First to Bunbury was Dirty Deeds, followed by Al Fresco, Twitch, Checkmate then Obsession. It was a close race with only minutes between the yachts at the Bunbury turn.

John Rayner from Al Fresco (BW 36) remarked that the race was a bit unusual the fleet being so close together for such a long period of time in very light winds. About the return leg he commented “Heading out of Bunbury and turning for Fremantle is normally kite up and hammer down for Al Fresco, not this year! Jib up again on the wind we went. We knew the breeze would turn behind us eventually, we just had to work hard to stay ahead.” Twitch and CheckMate passed them in the early stages but as the wind rotated and they set their reaching sails Al Fresco managed to sail back in to second place on line honours. They placed 5th on IRC corrected time and 4th on YAH.

Racing on the new JPK 10.80 Atomic Blonde, owned by Simon Torvaldsen, was 16-year-old Andrew Buchan. Commenting on his first blue water race he says “It was a beautiful race, great change of pace. Being slow I got to chill instead of being crazy busy on the deck in strong winds or during short course racing. I lay on the deck at night looking at the stars and reflecting on where I want to go with sailing which is to race TP52’s.”

Brock Pitcher (15) was part of the crew on Joss. Pitcher commented “Initially I got into offshore racing because of the RFBYC Sailing Institute. There was an excursion to the One Sails loft and a tour of the race yacht Indian. That sparked the offshore dream for me.  I love offshore racing, it requires working together as a team and pushing hard right to the end.  I have two main highlights from the race, the Saturday sunrise watching the sky light up with beautiful oranges and reds with Weapon of Choice sitting in the distance and my other is the finish. As we crossed the line at around 0400 Sunday morning, the self-accomplishment and success I felt was amazing.”

It was a race where the poor got richer as the late race winds strengthened from the south west which meant a great outcome the overall race results the S&S 34 Huckleberry, owned by Phil Somerville-Ryan, won overall on corrected time IRC combined divisions. Huckleberry’s crew were awarded a CYCA SOLAS Trusts Bravery award for their efforts in the 70th race where they rescued three of their fellow competitors from the sea. His victory was undoubtedly a popular one for the offshore sailing community.

While Alan Stein’s Dirty Deeds took line honours in his GP 42, Division One IRC was won by a new yacht to the WA scene this season, Geoff Bishop’s Summit King 40, CheckMate also third on YAH. Winner on YAH in this division was Twitch with Joss in second place on both IRC and YAH. Division Two winner on both IRC and YAH was Huckleberry, Atomic Blonde in second on IRC but Fourth Dimension (Lyn Powell/Ian Whitehead) took the second place off them on YAH.

Offshore Racing in Western Australia is facilitated by a passionate group of volunteers who manage radio communications, monitor the finishing line at all hours, assist on support vessels. A very special thanks to Terry O’Connor with his yacht aka aka who stationed as the turning point in Koombana Bay, Bunbury. It was a long tour of duty for his team who greeted all the yachts as they rounded and sent news and photos back to the radio room in Perth.

The last race in the RFBYC Farrawa Cup Series for the 2018-2019 season is the Roland Smith Ocean Race scheduled to start on Saturday 23 March.

Watch the race replay with YB Tracking, view images on social media and check out the full results – follow this link for more information – http://createsend.com/t/y-7F464D355F16916E?fbclid=IwAR3yXfBkEJLx-A3_iO6noxuBYU2bG-lnDEZnY5XjWM6vj4M_O2-5HN7TrHw