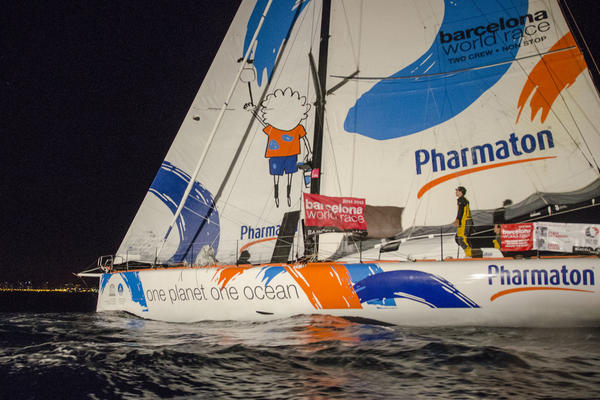 In the end, the Mediterranean was kind to Aleix Gelabert and Didac Costa on One Planet One Ocean & Pharmaton. The Barcelona duo, who had fought so hard and so exceeded expectations to score a hugely deserved fourth place, were granted a respite from the battering headwinds which signalled their entry to the Alboran Sea, whilst avoiding the shoreside shutdown of breeze which plagued earlier finishers. One Planet One Ocean & Pharmaton instead enjoyed light south-south-easterlies over the course of this afternoon, which carried them downwind to the finish line in front of the W Hotel at 5-6 knots.

The duo sailed an actual distance of 27,791 miles in 98 days, 9 hours, 12 minutes and 9 seconds, at an average speed over the ground of 11.8 knots. They arrived 14 days, 3 hours, 21 minutes and 44 seconds after the winning boat, Cheminées Poujoulat, skippered by Bernard Stamm (SUI) and Jean Le Cam (FRA), who arrived on March 25 th at 18.50 local time (17.50 UTC). Second went to Guillermo Altadill (ESP) and Jose Muñoz (CHI) on Neutrogena and third to fellow Spanish skippers Anna Corbella and Gerard Marín on GAES Centros Auditivos.

The Catalan pairing onboard One Planet One Ocean & Pharmaton were the undisputed ‘rookies’ of the race – this was their first attempt at a round the world voyage, neither had ever sailed in the Southern Oceans, and yet they not only finished fourth, but were the third team to complete the course non-stop.

A thrilled Didac Costa commented immediately after finishing: “We are very happy and we have achieved the goals we had set: finishing the round the world race. Besides, we did it quite fast so we are very satisfied. We have enjoyed a lot during the whole race, it's been fantastic.”

Co-skipper Aleix Gelabert also paid tribute to their near rivals We A re Water, saying: “In the end we have put some hours between us and them [We Are Water] but if you look the global course of a round the world race it is very few and well, it has been lots of fun having been with them neck-and-neck, and waiting until the last minute to see who arrived first; it has been very tight.”

Aleix and Didac reached Gibraltar on January 3rd in sixth position, around 60 miles ahead of We Are Water – completing the Mediterranean leg of the course in less time than the 2011 race winners Virbac-Paprec 3 during the previous edition.

In the Atlantic, the distance between the pairs had increased to about 100 miles by the time Gelabert and Costa turned southwards, with fifth-placed Renault Captur just over 50 miles in front. By the time they passed Madiera, they had closed to within 30 miles of Riechers and Audigane .

We Are Water pursued them fiercely across the North Atlantic, and on January 12, around the latitude of 5° N, Bruno and Willy Garcia overtook into sixth place. Off the coast of South America, We Are Water began to gradually pull away in the south-easterly trades, and as they turned eastwards were about 200 miles ahead.

Aleix and Didac celebrated their baptism in the ‘Roaring Forties’ on January 28, and rapidly dived down to nearly 45°S and the margins of the Antarctic Exclusion Zone, more southerly than either We Are Water ahead or Spirit of Hungary in seventh behind. They passed their first ‘Great Cape’, the Cape of Good Hope, on February 1, with We Are Water about 530 miles to the north-east.

The Garcia brothers initially extended away across the Indian Ocean – to around 1,000 miles as One Planet One Ocean & Pharmaton passed the Kerguelen Islands. But despite being in different weather systems, One Planet One Ocean & Pharmaton staged a comeback in the Deep South, and as they passed Cape Leuwin on February 15th they had reduced that deficit to around 700 miles. The same day Renault Captur announced that they had sustained damage to a rudder blade, and three days later Jörg Riechers and Sébastien Audigane confirmed that that they would be heading to Wellington for repairs. With perfect timing to max imise the opportunity Aleix and Didac recorded their highest speeds in 24 hours of 17.8 knots between 18 and 19 February.

By the time Renault Captur made landfall in Wellington, We Are Water was already east of New Zealand and One Planet, and One Ocean & Pharmaton just 300 miles behind. As they headed into the Pacific Ocean, both boats were sailing in the same weather system, but We Are Water were suffering less favourable angles. By dawn on February 23, as We Are Water completed their eighth gybe in 48 hours, One Planet, One Ocean & Pharmaton was just over 200 miles behind and averaging nearly 17 knots.

Gelabert and Costa achieved a lifetime ambition when they passed Cape Horn on March 8, just 50 miles west of We Are Water – a comeback across the Great South of nearly 1,000 miles.

The duel intensified in the South Atlantic, both boats sailing in parallel, frequently just 30 or 40 miles apart. On March 15th, the pair crossed tracks and took photos of one another, and by dawn the following morning One Planet, One Ocean & Pharmaton had emerged in fourth place. We Are Water swiftly recovered to overtake again, around 1,000 miles off the coast of Brazil, and the match race persisted until the Doldrums with further position exchanges.

Approaching the Equator, We Are Water opted for a more westerly course, which initially looked favourable, but One Planet, One Ocean & Pharmaton had a faster crossing in fourth. Both endured long tense hours of sailing at just 2-3 knots, u ntil One Planet, One Ocean & Pharmaton was first to pick up the trade winds from the north with a 100-odd miles of theoretical advantage. They held their advantage on the long North Atlantic leg, until light winds in the Gulf of Cadiz brought We Are Water to within 55 miles astern.

One Planet, One Ocean & Pharmaton returned to the Mediterranean on April 5 with a 60-mile advantage and a forecast of 38-knot headwinds, followed by a potential breeze shut down in the final miles off Gibraltar. The Alboran Sea crossing brought one final challenge, beating into over 35 knots with rough sea conditions, which saw the margin between the two boats shrink to just over 40 miles. But as We Are Water sought shelter in the Gulf of Almería to hoist the storm jib and untangle a halyard issue, One Planet One Ocean & Pharmaton were able to recover 30 miles of advantage and secure the coveted fourth finishing position.

After a full month of mid-ocean match racing, their long-term rivals Bruno and Willy Garcia on We Are Water, are forecast to arrive in Barcelona in fifth place tomorrow, April 9th, between 1200-1500hrs (UTC).

For both Aleix Gelabert and Didac Costa Barcelona is home – Didac was born here – and to complete their first ever circumnavigation in a Spanish-flagged yacht, sailing in and out of their home port, is a particularly special moment. To do so finishing fourth in an IMOCA 60 round the world race, having completed the course non-stop, is an inspirational achievement for the duo.

Both Gelabert and Costa began their solo racing careers in the Mini 6.50 class, competing in the 2011 Mini Transat to finish 18th in the Proto and 21st in the Series divisions respectively. Both moved up to the IMOCA 60s through the FNOB, Gelabert racing onboard GAES Centros Auditivos and sailing doublehanded with Anna Corbel la, as well as working as perparateur for Anna and Gerard Marín on their doublehanded Figaro campaign.

Gelabert’s first taste of the Barcelona World Race was as shore crew for Corbella and Dee Caffari in the previous edition of the race, in 2010. Costa, meanwhile, is relatively new to the IMOCA class, although the pair sailed some 8,000 miles together in training to prepare for the race. To follow Corbella and Marín home in fourth place will be a dream come true for both of them, having commented before the race that their ambition was to complete the course. Aleix, aged 37, is an architect by profesion and Didac, 34, a firefighter.

Gelabert and Costa’s fourth place is all the more impressive given that they were racing the oldest IMOCA 60 in the race, the 2000 design which was famously sailed by Ellen MacArthur to second in the 2000-01 Vendee Globe. Having gone through many thorough refits and three previous round the world trips – including two Barcelona World Races – the Owen-Clarke design is a one of the most enduring of the IMOCA fleet and much loved by those lucky enough to sail on her.

Veteran racer Nick Moloney, who also competed in the Vendée Globe on board the yacht as Skandia emailed Aleix and Didac during the race to congratulate them on their position and share his memories of the yacht: “I believe with boats is that they have a soul… a heart even. This boat (your boat) is a survivor… a battler! Many sailors hold many great memories of their days and successes afloat on this boat… I am really delighted to see her still stretching her legs in open ocean.”

Speaking shortly after they crossed the line, Aleix Gelabert commented on the legendary history of the yacht, saying: “I don’t feel that we made this legend bigger, I feel that we have sailed as best as possible, I think we have had a good performance on this boat and I think this boat is really a good boat and we are very very proud of it.”

The ‘One Planet, One Ocean’ campaign is part of an agreement between the FNOB and the UNESCO Intergovernmental Oceanographic Commission (UNESCO-IOC). As part of their voyage, Aleix and Didac were involved in collecting data on salinity levels and levels of microplastics in the water, as well as the launch of the Argo floats and the Citclops project to analyse the quality of surface seawater.

Key dates for One Planet One Ocean & Pharmaton

Quotes from the skippers on arrival:

Aleix Gelabert: “We are very happy to have arrived, satisfied at having achieved it and very excited.”

Didac Costa: “We are very happy and we have achieved the goals we had set: finishing the round the world race. Besides, we did it quite fast so we are very satisfied. We have enjoyed a lot during the whole race, it's been fantastic.”

Aleix Gelabert: “What we have said is what's really happened. We have had no big problems. Little problems – things that break and we have repaired, but nothing major.”

Didac Costa: “It has gone very well. I am very happy about how it went. There are always discussions, that's obvious, but I think it has been very satisfactory and it went well. We are happy.”

Aleix Gelabert: “In the end we have put some hours between us and them [We Are Water] but if you look the global course of a round the world race it is very few and well, it has been lots of fun having been with them neck-and-neck, and waiting until the last minut e to see who arrived first; it has been very tight.”

Didac Costa: “We are surprised with the boat. We did not think we would be able to go this fast and arrive in this position, being able to keep up the pace we have kept. But that’s what we found and therefore we are happy. It is a surprise having been able to go quickly with this boat and to be in this position where we are.”

Aleix Gelabert: “We feel the same after our first round the world race, I don't know what we expected. We expected a lot of spectacle and excitement at the arrival and yes, we are very happy. I don't feel different, people says you change after a round the world but I feel the same, I'll tell you in a few days.”