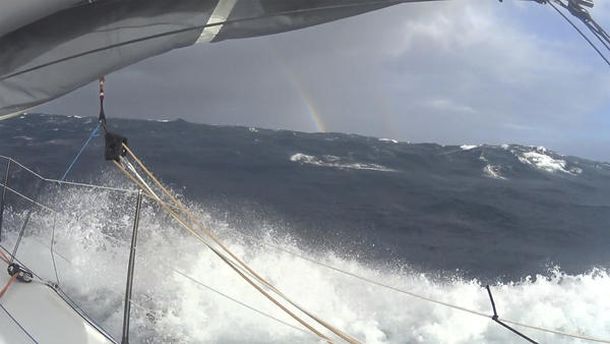 It is one of those crazy moments that round the world ocean racers cherish, or at least amuses them, the antimeridian. When East becomes West. Sailing eastwards, at one hundred and eighty degrees east, it is not so much Live Another Day, as Live the Same Day twice. The clock goes back 12 hours and the day happens again, in theory!

For Bernard Stamm and Jean Le Cam, nine circumnavigations between them, passing the Antimeridian today is merely another nice reminder they homewards bound, closer to the finish than the start. Still making speeds north of 20kts and racking up 460-470 miles 24 hours runs, the Barcelona World Race leaders passed the Antimeridian at 1415hrs UTC today.

So at 0215hrs Friday their time, they revert to 0215hrs Thursday. They narrowly miss being able to claim Friday 13th part 2?

The Antimeridian is at 180 degrees to the Prime Meridian which passes through the Royal Observatory in Greenwich, England which sets the position of zero degrees of longitude. It was established in 1884 when the system of time zones and latitude and longitude were set.

Stamm and Le Cam's margin over second places Neutrogena has doubled since Guillermo Altadill and José Munoz made the tough decision to divert to pitstop in Invercargill, South Island Ne w Zealand early yestrday morning. The Spanish-Chilean partnership have had a rough time, with winds of more than 40 kts yesterday and big seas, as they make for the Kiwi haven.

“The guys have been taking it a little bit easy and careful given the conditions, they don't want to break anything on the way in. But we will be ready for them. We are set up for hopefully a fast repair, looking to ensure they dont take a second longer than the mandatory 24 hours. They have not been asking for anything other than the repair, they dont seem that bothered about comforts like showers and hot food, they just want to get on with it and get back out there.” said Ross Daniel, Technical Director of 5 West, the team which owns and manages the IMOCA 60 programme.
Neutrogena are due in for their pit stop early Friday morning UTC. A technical team comprising local Kiwi experts and a member of the 5 West shore team will be on the dock.

The Neutrogena team remain positive that they can be back on the race course swiftly,  maintaining second place ahead of GAES Centros Auditivos.  Anna Corbella and Gerard Marín were still 934 miles to the west of Neutrogena, having just sailed 406 miles in the last 24 hours.  The GAES CentrosAuditivos pair should pass in to the Pacific tomorrow, Friday.

Renault Captur'sJorg Riechers and Sébastien Audigane who remain about 285 miles behind GAES Centros Auditivos, took time today for a videoconference for Renault their sponsors, talking about the core values which they hold dear to making it work best between the two co-skippers:

“We make sure we spend time together. We don't just pass each other as we swap to go on deck. To perform on the water you have to be a team and work as a team, whether that is manoeuvres, navigation, maintenance, daily chores. You have to work hand in hand. We could not make it work as two individuals.” said Audigane, while it was obvious from the candid images that the two enjoy a strong relationship, tempered ever stronger by battling through 50-60kt winds two days ago.

The Frenchman however noted wryly in an email that their 42 days to Cape Leeuwin felt slow compared to his 50 days Jules Verne record breaking circumnavigaton on Orange II exactly 10 years ago.  With a 13 man crew skippered by Bruno Peyron that actually included race leader Bernard Stamm and Barcelona World Race Director Jacques Caraes,Audigane was part of the team which set the mark at  50 days, 16 hours, 20 minutes and 4 seconds, achieving an average speed of 22.2 knots.

We Are Water, Bruno and Willy Garcia, are due to pass Cape Leeuwin this afternoon in fifth place. One Planet One Ocean'sAleix Gelabert and DidacCosta are emerging from a period of very strong winds and big seas, their first big Southern Ocean storm. And Nandor Fa and Conrad Colman have now passed the longitude of the Kerguelen Islands and are back up to 17kts.

Conrad Colman (NZL) Spirit of Hungary: “We are enjoying our summer holiday in the Southern Ocean. We are clearly not here to win the race. We started on the back foot by having a boat which was not completely prepared and not having trained together and so the reality is we need to find other ways to motivate ourselves and other ways to find satisfaction for being here. We have had a few technical problems which are just the normal growing pains for a new boat like this. Instead of being upset about things which go 'bang'. Nandor and I are finding a great deal of satisfaction in repairing the situations that we find ourselves in, and simply staying out here. We have had a number of problems which could very easily have had us running to land as well. I am sorry to see Neutrogena having to make a techncial stop, but we are finding a lot of satisfaction in staying out here. We are always finding ways to improve, to improve ourselves and the boat for next time, which I ho pe will be, for both of us, the Vendée Globe.”

Sébastien Audigane (FRA), Renault Captur: “It is going well. We are a bit tired this morning. We had a problem with a gennaker sail yesterday adn we had to take it down and fix it. We had good materials, big self adhesive sheets of kevlar and we bond that with sikaflex on to the sail. We dried it an hour by running the engine, and then it was up and back in action.

“Today we have a strong NWly wind, 25 to 35kts and some seas which are well formed. Renault Captur is going fast, between 16 and 23kts. Our biggest problem is when we get cross seas, like the NW wind and SW swell you get when the depression is in the south.

“Our biggest difficulty was three days ago when we suddenly had gusts of 60kts. We had the smallest sails we can have. We took three reefs and the smallest jib. The seas were also very, very big. It was tough going, with the cold and tiredness. We really had to stick together as a team to get through it. We were changing watches every hour. And now we are bit fatigued.”

Nandor Fa (HUN), Spirit of Hungary:” There is a lot of floating objects in the seas. We found a huge fishing net earlier, we found whatever it was nearly broke the rudder. There are too many things floating in the ocean, it would be much better to have a clean ocean.  As far as we can, we take care of ourselves and the seas. “