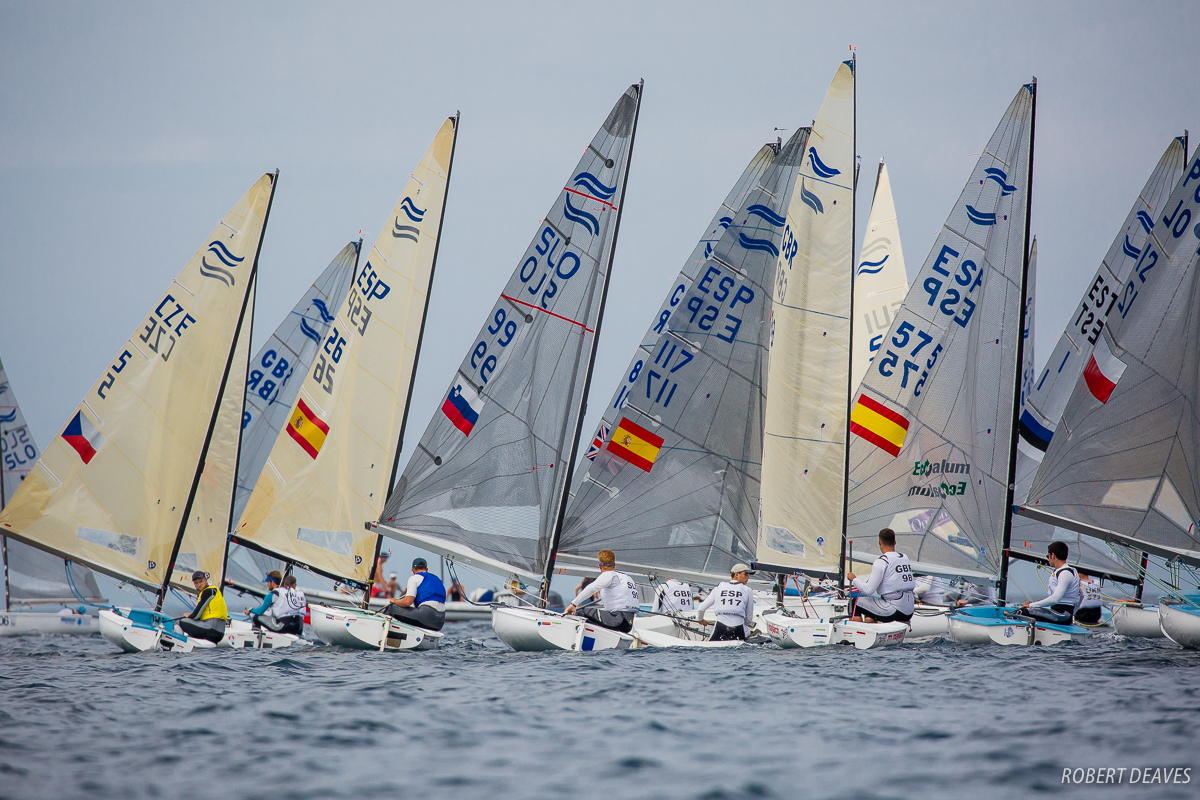 Attempt at a start on Day 5 - Robert Deaves pic

Ondrej Teply, from Czech Republic, has won the 2018 U23 Finn World Championship for the Jorg Bruder Silver Cup after no more racing was possible on the final day in Koper, Slovenia.

Joan Cardona, from Spain, took the silver while Hector Simpson, from Britain, won bronze. The first U19 was Federico Colanino, from Italy in an impressive ninth place overall.

Over the past week, 36 young Finn sailors from 19 nations have been competing at JK Jadro Koper the Jorg Bruder Finn Silver Cup, which was donated to the class by the Brazilian Olympic Committee in 2004 when the class held its world championship in Rio de Janiero. It has been a hard fought championship in tough conditions and in a great spirit.

While the race committee tried valiantly to put on Friday’s races, the wind just was not playing the game and shifted through 120 degrees all day. It ran almost to the time limit until they admitted defeat and sent the fleet back to the club.

Teply had a nerve-wracking day waiting. “It was a long day on the water today, but I am very happy to win my second Silver Cup. It was a very tough day with sometimes wind, sometimes not. We tried to start a few times, and in the end, luckily for me we didn’t make any.”

On the week “It was hard. I was surprised with the level of the fleet. It was very hard to hold onto the position all the time to stay in front especially with the conditions. But I am happy for all the juniors in the Finn fleet. They have improved a lot and made me work quite hard for this. This is my last Silver Cup, so I am very happy to say goodbye with the win.”

Cardona said, “Looking at how I started the week I think it is very good to finish in second place. But today I wanted to race. At the end we had some wind, but the race committee decided not to race. Ondray takes the win and he was better from the first race, so congratulations to him.”

Simpson gained one place Thursday night from a protest decision between two other boats to move from fourth to third, but it was still a tense day.

“I picked up 50 points over the first two days and then somehow with the discard ended up on 48, so have come away with bronze, which was the most I could have hoped for after the way my first day went.”

“It was a really good competition Everyone had some big scores apart from Ondrej and Joan, who managed to put together a really consistent series together and they came away with gold and silver, so consistency was really the key this week, staying out of the wind holes an getting off the start line.”

“It was probably the most tense it’s ever been on the water for me. It was going left and right, 3 knots, 10 knots and about three starts and a general recall and it was super close behind me with about four or five sailors within five points, so I had not much to gain but a lot to lose.”

Within the fleet there were also a very encouraging ten U19 sailors, competing for their own set of medals. Last’s year’s inaugural winner, Federico Colanino, from Italy, has had a mixed week, but led the group into the last few days to retain the Gold they took last year. Lachlan Gilham, from Australia took silver with Slovenia’s Jan Orel repeating his bronze from last year.

If the level of coaching support in Koper is any indication of the potential of this group of committed young sailors, then they have a great future ahead of them to become the next generation of Finn rock stars.

After winning the Finn Gold Cup, the class world championship, in Aarhus earlier this month, Zsombor Berecz, from Hungary, was coaching a young Hungarian in his first international event. Triple Olympic medalist, Vasilij Zbogar, from Slovenia, was also here coaching the Ukrainian who won Wednesday’s final race. The other coaches here number more Olympic campaigns and more Finn knowledge than it is possible to recall. A collective encyclopedia of all things Finn, a knowledge base for future generations to soak up experience and information.

These young sailors are at the start of their long journeys in sailing, and the Finn class provides an excellent classroom for sailing and for life. The fleet includes sailors from 19 different nationalities and cultures, all mixing together in one group, learning, training, becoming friends for life, sharing their own cultures. They all have their own individual battles, but are all like-minded, committed athletes on the same journey.