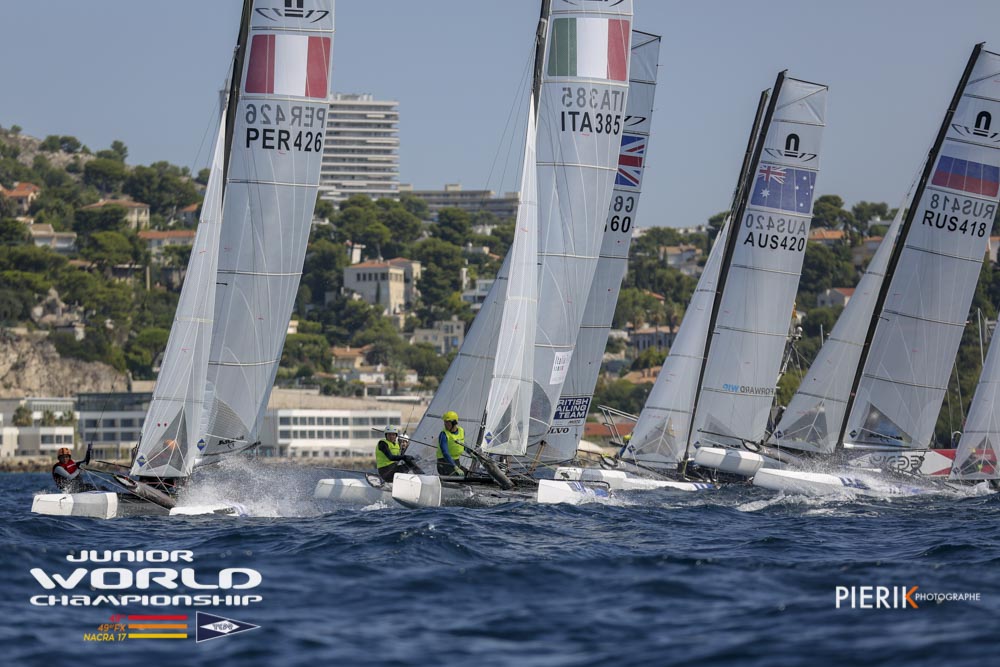 Marseille, France: “I just want to get out there and beat the boys,” said Vilma Bobeck of Sweden this morning as leader of the 49erFX World Championship, and second overall in the open 49er Class Championship.

Unfortunately for her and team mate Malin Tengström, they would never get the chance to complete any more races, as the Championship finished without any completed races on the final day. The Swedes were one of two teams who didn’t capsize in the first lap of the race that was ultimately abandoned.

“Last year on the windy days at the Worlds in Porto, we capsized at least two times, every windy race. This year we only capsized once each in three races, so that’s progress,” continued ‘Bobeck. They were also lightning fast in a straight line and started well.

“We’ve been working with the Swedish team and Paul Brotherton (a British 49er Olympian) as coach for some of last year, when the senior sailors are in Europe and we can fit into the squad’s plans.”

The 49erFX compete as an open class, but the world title and podium positions go to the top female teams, while the open competition, which includes the male and mixed teams, complete for the class championship.

Continued Italian dominance in the Nacra 17
Gianluigi Ugolini/Maria Giubilei (ITA) have won the 2018 Junior World Championship in the Nacra 17. They won the only race today, ultimately winning six of the seven races and were clearly the class of the field.

Upwind the racing was typically quite close, but the Italians had a real edge downwind, and the only race they didn’t win was the first super windy race of the regatta.

The Federazione Italiana Vela, Italian National Team, clearly has something to be proud of in their Nacra 17 fleet, as Italian sailors have now won all three major titles: the 2018, Worlds, Euros, and Juniors.

World Sailor of the Year candidates, Ruggerto Tita and Caterina Banti took a clean sweep of the season, winning every regatta they entered.

The Nacra 17 fleet was small here in Marseille, with the championship not yet established and a few of the younger teams off in Japan, but it is certainly diverse. The eight entries came from seven nations and four continents.

Tayla Rietman and Lachlan White (AUS) was the only team to take a win from the Italians, and relished the strong home-style conditions. “We’re so happy to be here in warm and sunny Southern France. Back home it’s a bit rough right now, so any chance to get out and race in such great conditions is fantastic,” Tayla said.

In third place were Javier Arribas Harten/Adriana Barron (PER), representing the team farthest away from home, battled hard and were very happy with their racing. Peru is hosting the 2019 Pan Am games and this crew plans on racing there and continuing on with their campaign.

Two races decide 49er
The only fleet to get out this afternoon was the 49er Gold Fleet, as the Mistral that has been with us the past three days continued at full strength. Six teams were within eight points of the leader at the start of the final race, so saying it was anyone’s regatta is no understatement.

Robert Dickson/ Seán Waddilove (IRL) sealed the victory by winning the last race. The overnight leaders started at the boat end, caught the first shift off the cliffs, and after a couple more tacks up the beat, consolidated and extended in victory to seal the championship.

Locked in a tie after the series are Max Stingele and Linov Scheel (GER) who edged out Daniel Nyborg and Sebastian Wright Olsen (DEN) based on the strength of their Gold fleet win in the first race of the day.

The Germans had the best day on the water, with a 1, 5, and were all smiles after coming back to shore. In between the two races, when it was still unclear if the Race Committee would run a second race or not.

Third place is a decent consolation prize for the Danes but they will be kicking themselves for an error in the first race that cost them the Championship. In third place down the first run they capsized while gybing.

The breeze and seas were right on the limit for the afternoons racing, but ultimately most the Gold fleet acquitted themselves nicely in the challenging conditions.
And that is how This Championship will be remembered.

The 2019 edition of the Junior World Championship will be in Risor, Norway in the week following Kieler Woche.