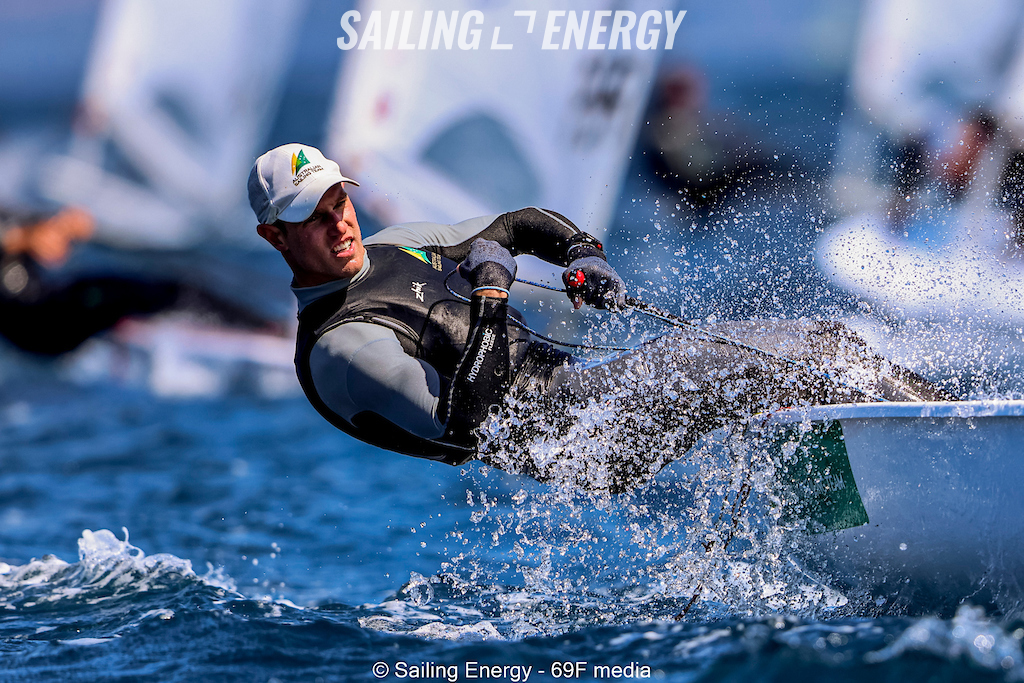 The famous Hyères mistral cracked in for the opening day of racing at the French Olympic Week 2022, throwing up challenges to competitors and race organisers alike.

In glorious conditions much like at home, the Australian Sailing Team (AST) and Australian Sailing Squad (ASS) athletes scored a couple of race wins and several top three finishes on a successful first race day, with Olympic champion Matt Wearn (WA) the stand-out performer and leader of the ILCA 7 fleet.

Strong winds of up to 25 knots enabled the 470s, 49er, ILCA 6 and ILCA 7, Kites and iQFOiL classes to get a good day of racing in, but conditions were simply too choppy on the offshore course with the Nacra 17 only completing one race, while the 49er FX fleets finished two races.

Before the start of racing Australian Sailing’s Technical Director Michael Blackburn had predicted a “very physical day” and conditions that suited a lot of the Australian sailors. The team were eager to get racing, with this just their second international regatta of the season after the opening Sailing World Cup series at Palma, Spain earlier this month.

“We are looking for a much-renewed vigour among the team after we had some COVID issues, breakages and other challenges at Palma, which held a lot of our team back. But all those issues are hopefully gone now, and we are looking forward to some really good racing here this week,” Blackburn said.

Olympic champion Matt Wearn did not disappoint, leading the Australian charge with a second and first place on the first day of racing to take the lead in the ILCA 7 fleet.

“It was a good day for me with a two and a one and we’ll take that going into day two. It was a pretty typical Hyères day really with a nice offshore breeze of around 15 to 20 knots. There were a few shifts as we were sailing quite close to shore so you couldn’t really relax when you are out in front because you didn’t know what would happen on the downwind,” Wearn explained.

With only one month to go to the ILCA 7 world championships in Mexico, the whole Australian ILCA 7 (former Laser) squad showed their class with fellow Fremantle sailor Zac Littlewood (WA) adding another win in the first race of his group. After a 13th place in the second round Littlewood finished the first day ranked 17th. Ahead of him in 15th sits Finn Alexander (NSW) after a third and 10th place, while Luke Elliot (WA) is ranked 23rd after another two top ten finishes (9, 7). Ethan McAullay (WA) also scored a top ten finish with a fourth place in the first race.

“It was great to see all the boys out there, the stronger conditions help us a little bit and we enjoy this a bit more than maybe some others do,” Wearn added.

“It just shows the class of the squad even with got a couple of younger guys emerging. They are pushing to the top of the fleet and hopefully we can keep that consistency throughout the week and finish with all four of us in the medal race.”

470 sailors Chris Charlwood (WA) and Amelia Catt (TAS) were also among the top-performers of the day after scoring a second and sixth place to finish the day in fifth overall.

They mastered the conditions the best of the two Australian crews racing at Hyères, with Tokyo Olympian Nia Jerwood (WA) and Conor Nicholas (WA) in 20th after a 10th and an 11th place.

“It was definitely a good day for us. It was good coming out of the blocks firing like that. We feel like we slightly underperformed in Palma, so it’s been good to come here and work on a few things and show that we have what it takes and that we are actually quite close to being one of the strong competitors in the fleet,” Charlwood said.

“We perform pretty strongly in these conditions, so if we get around 15 knots tomorrow we hopefully can get a couple more solid top 10 results.”

In the ILCA 6 (former Laser Radial), Zoe Thomson (WA) is the best placed of the Australians in 15th after two races. Tokyo Olympian Mara Stransky (QLD) follows in 23rd, with Casey Imeneo (VIC) in 32nd and Elyse Ainsworth (WA) in 34th.

“This is a much bigger fleet than Palma with close to 70 boats,” Thomson said.

“The starts were pretty intense and there was a lot to be gained by having a good start and getting away clean and fast. I ended up having two keepers, it was a bit of an average day but nothing too drastic. Everyone was struggling off the line a bit more with the bigger fleet and I’m looking forward to some lighter breeze to see where we all sit speed wise.”

Olympic medallist Olivia Price (NSW) and new partner Evie Haseldine (NSW) had a strong finish to the first regatta with a second in the last race and are placed 12th overall. For squad mates Laura Harding (NSW) and Annie Wilmot (NSW) a consistent 4, 6 series paid off with the pair moving into eighth place overall.

The 49er fleet managed to get three races in with Queenslanders Tom Needham and Joel Turner the top ranked Australians in 17th (8, 17, 8), while Olympic gold medallist in the Laser Tom Burton (NSW) finished his first international race day in the 49er together with Simon Hoffmann (NSW) ranked 28th (16, 18, 22).

“It was a really good day for us. We were going to have three top ten, but unfortunately in the middle race we had a bit of a swim just before the finish line,” Needham said. “We are using these ones to check in with the fleet and some racing practice after such a long period of time stuck at home in Australia.”

Rio Olympic medallists Jason Waterhouse (NSW) and Lisa Darmanin (NSW) only had one race in the Nacra 17 but made the most of their first racing opportunity since the Tokyo Games and after missing out on most of the racing at Palma due to a bout of COVID.

“We had a couple of races in Palma but we had COVID, so we had to recover from that,” said Darmanin.

“We did really well today, and it was the first time we have properly raced since the Games which is super exciting. We were leading around that last top mark, but unfortunately we had a gear failure which we overcame and sailed with it to fourth.”

In the new class additions to the Paris 2024 programme, Queenslander Breiana Whitehead put in a solid first day and is ranked seventh in the Kite after four races.

The iQFOiL class will also be making its Olympic debut at Paris 2024 and Australian Sailing Squad’s Grae Morris (WA) and Caelin Winchcombe (WA) are making their international debut in the class this year. After five races they sit in 16th and 44th respectively, but it was Australian Sailing Futures sailor Will McMillan (NSW) who outranked them both, sitting in ninth overall after a strong race series including a fifth and third.

For the full results, see: https://sof.ffvoile.fr/results/