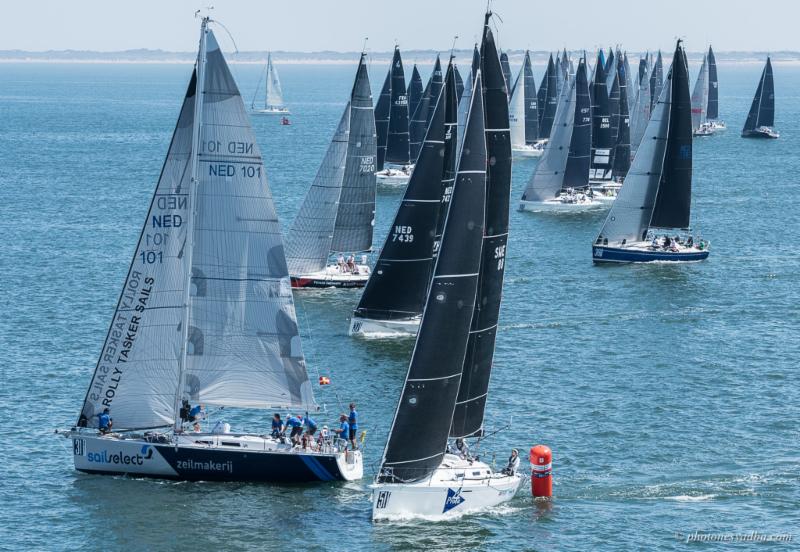 Light air and current in the Class C start had its casualties Credit: Pavel Nesvadba.

16/07/2018
The sun continued to shine today at the start of racing in The Hague Offshore Sailing World Championship, with many thousands of beachgoers watching nearly a thousand sailors on their boats in the fleet start the long offshore race portion of the programme.
Class A competitors were sent on a 155-mile zig-zag course off the Dutch North Sea coast with a scoring gate planned at 70 miles, while the Class B & C competitors will race a 135-mile long course with a scoring gate set at 60 miles. By having a scoring gate race officials are able to scale two races at once, a clever and efficient way to fulfill the offshore sailing requirement in this championship, since the remainder of the week will feature only windward/leeward course, with 7 races planned of this type.
Winds for this race have been consistent with the forecast in being a light northerly seasbreeze, light enough to postpone the start from 11:00 AM to 12:30 PM as race managers have had to wait to have this breeze become steady enough to set a windward leg before the fleet headed off on their respective courses. With the complex currents and numerous exclusion zones throughout the course areas, navigators will be busy all day and night.
Nonetheless, the moods were upbeat in the morning skipper's Briefing, with Kristen Harmstorf, skipper all-girls team on Tutima (GER), saying “These lighter conditions can be good for us, so we are looking forward to these races.”
But it will not be easy: the light air conditions are tricky, and changes are in the forecast for the evening as the onshore northerly switches to being a light offshore southerly at night, and then switching back to being a light northerly onshore wind once the land starts heating up again in the morning. Pro sailor Jesper Radich, sailing on Tea Eckengren-Saurens's Swan 45 Blue Nights (FIN), said “The team is good, they are ORC European Champions from last year, but the weather forecast says we may be looking at 3 big shift transitions during this long race, so those who figure out how to play this will do well and others may be left behind.”
In Class C Erik van Vuuren said they are confident going into this race having made some changes to the tune of their bright-yellow Waarschip 36 Hubo: “We increased the mast rake and the mainsail size – and she is going really well now, so we feel confident about speed in the long race.”
Being the yacht designer of the Italia 9.98, a two-time ORC Class C World Champion design, and a member of the ORC's International Technical Committee meeting here next weekend, Matteo Polli takes a longer analytical look at how the scoring and ratings in both ORC and IRC are affecting results. “Its too early to tell yet any conclusions on how this is working, we are just getting started, so we simply sail as fast and as well as we can. This class will be really tough, so to do well will require focus.”
Regardless of the light winds, some teams are thankful they're here at all to compete. Frans Rodenburg's Beneteau First 40 Elke (NED) had problems coming back from the IRC Europeans in Cowes, running aground on a sand bar at enough speed to damage the internal structure of the boat. Fortunately no one was hurt in the incident, but the subframe had to be re-built in the last few weeks, and the boat re-measured having lost 200 kg in weight from her past sailing trim, with a certificate to race issued only days ago.
Rodenburg has shaken this off and is looking squarely ahead to compete here in The Hague. “For the sailing season, we've had a good season so far,” he said. “We won both a Dutch and European IRC Class title. We are happy to be able to start this event today with the offshore, hopefully there will come some more wind.”
Numerous teams at this event come from places without current (eg, the Baltic & Mediterranean), and even proven champions can struggle with this new element of racing here in The Hague. An example was today when the reigning ORC Class C European champion from Sweden, Patrik Forsgren's modified First 36.7 Team Pro4u, successfully avoided SailSelect attempting to start on port tack but called over the line, yet misjudged the current in the manouever and had her stern pulpit collide with the starting mark, forcing her into a penalty turn. Not the best start to a championship, but plenty of space to make up the gaff.
In the long race at 1800 local time Karl Kwok's Pac 52 Beau Geste (USA) was leading Class A around the track with about 112 miles left to sail, winning in their close match race with Tilmar Hansen's TP 52 Outsider (GER) in hot pursuit.
And in Class B Claes Landmark's Mills-designed Landmark 43 Santa (NOR) has been leading the pack all day, being chased closely by another team from Norway sailing a sistership, Torkjel Valland's White Shadow. At 1800 Santa had 104 miles to go.
And in Class C Gideon Messink's J/Lance 12 (FRA) was leading the pack with 107 miles to go.
Later tonight as teams cross their respective scoring gates, results for Offshore Race 1 will be posted on the event website at https://www.manage2sail.com/en-US/event/OSW2018#!/results, and if also the long race once it finishes at the same site.
– Dobbs Davis