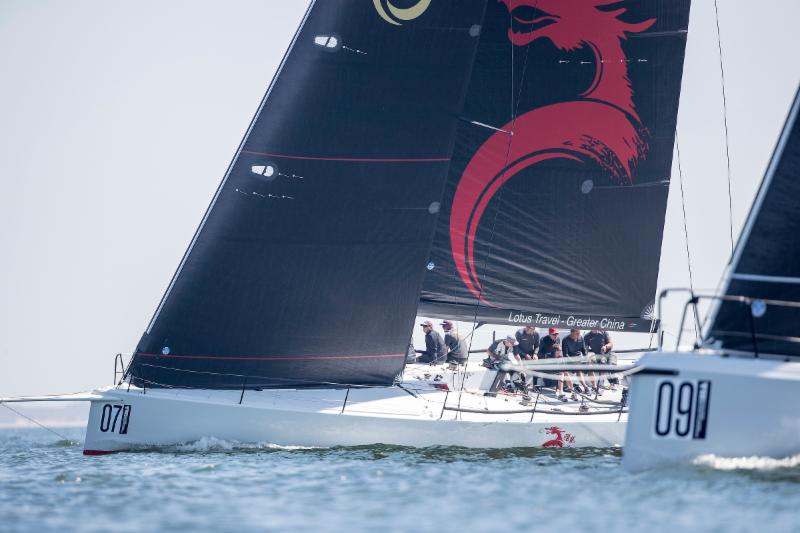 After over 24 hours of sailing in light air off the Dutch North Sea coast, the opening act of The Hague Offshore Sailing World Championship has now concluded and the leaders are now known in each of three classes before the second stage of inshore racing begins tomorrow.

After a start postponed until 12:30, each fleet started off in light 6-9 knot conditions that varied in strength and direction for the rest of the day and evening, reaching a high of about 12 knots at sunset before dropping again into single digits towards morning. With shifting breeze and currents at near springs in strength, it was a challenging night for all.

“It was a good course and a good test,” said Eddie Warden-Owen, guest strategist aboard Tilmar Hansen's TP 52 Outsider. “We did not have the sail inventory options that Beau Geste had, and had to make some compromises – like going west of the windfarm on the final long leg to the finish – but it was a good race with lots of elements to make it interesting.”

Outsider spent most of their race in lock-step behind Karl Kwok's Pac 52 Beau Geste, who won both races by a comfortable margin, with Outsider second and the Ker 46 Van Uden youth team in third, led by Volvo Ocean Race veteran Gerdjan Poortman and Dutch 470 Olympian Lobke Berkhout as coaches.

The racing in the top of Class B closely resembled that of Class A, with two boats leading the pack and pushing each other throughout their 135 mile track. Claus Landmark's Landmark 43 Santa took an early lead and was clever to hold on to it throughout the race, due in no small part to the strong navigation skills of another Volvo veteran, Roger Nilsson, who has logged 7 Volvo and Whitbread races around the world.

“It was quite challenging, wind was shifty and we're not very used to the currents you have here, so it's good we had Roger's help,” said Landmark “But we kept the boat moving, and since the Worlds in Copenhagen two years ago we have upgraded our rudder with a new design so the boat is going well.”

It was another Norwegian Landmark 43, Torkjel Valland's White Shadow, that was never far from Santa and kept the pressure on throughout the race.

“We had some ups and some downs,” said Valland. “After the start we got stuck on one of the buoys, and when we got loose, most of the fleet had passed us. But we managed to sail up to the front of the fleet again, until we reached Santa. After that it was back and forward with them. We tried to stick with them, but they continually found a gear and pulled away every time we got to them again. But overall we had a super race, and it gives great promise for the rest of the week. I think the top of this fleet will have some very close racing.”

Rounding out the top three in Class B was Michael Berghorn's X-41 Halbtrocken 4.0 from Germany. All top three teams scored 1-2-3 in each of the two races.

Class C was more interesting, with no clear dominance in the results like in the other two classes. Instead there were different leaders in the results of each race, sometime with dramatic differences in scores.

In scoring at the gate for Race 1, a local designed and built 35-footer, Jan Boort's New Frontier, was ahead of the pack on elapsed time by over seven minutes yet corrected to third place, while Gideon Messink's J/112E J Lance 12 corrected to first and Michael Mollman's X 37 Hansen was second. But in the last long leg of the race this was all to change.

Just northwest of the harbor at Ijmuiden in the mid-morning breeze, about 25 miles from the finish, J Lance 12 and Hansen on rhumb line managed to get ahead of New Frontier, who was hedging a little closer to the beach to the east. Like a car wreck on the highway, J Lance stops, followed by Hansen and the pack of 3 other boats around them: the Farr 30 Cheyenne (SWE), the Melges 32 Old Jug (GER) and the Cussutti 36 Katariina II (EST). New Frontier shoots into the lead, but then strays west away from the middle track just west of Ijmuiden and starts to slow too.

Meanwhile, like a passing train, the Waarschip 36 Hubo (NED) came on fast from nowhere to grab the lead and never let it go for the remaining 20 miles to the finish. Others seeing Hubo do this end-around jumped on the train too, leaving those to the west helpless, with only Katariina and Hansen able to get out of the trap.

“We did not do very well in the first part of the race,” said skipper Eric van Vuuren, “but we did have a game plan to hit the beach hard on the final leg and pick up the offshore breeze.”

“Besides the weather forecast and knowing the tides, we also used the AIS system quite a bit to see what the others were doing,” said Hubo navigator John van der Starre.

The results were spectacular, slinging Hubo and others in their wake into the lead to finish well ahead of many other rivals who were ahead of them at the scoring gate. And while Hubo still had to settle for a 4th in corrected time in this race, this was much better than the 34th earned in the first race.

So, after all this drama in Class C it should be no surprise that a team who is a consistent performer from years of championship sailing currently has a six-point lead based on their scores of 6-1: Patrik Forsgren's modified First 36.7 Pro4U (SWE). In second is Heiko Pasler's X-362 Sport Static Electric (GER) on scores of 8-3, and currently in third is Alain Bornet's J/109 Jai Alai (NED) on scores of 5-6.

Phase two of the competition at the Offshore Worlds resumes tomorrow with the start of the first of seven planned inshore races. The teams will be given a respite tonight after the long race with a planned start time tomorrow in the afternoon at 1300 local time.