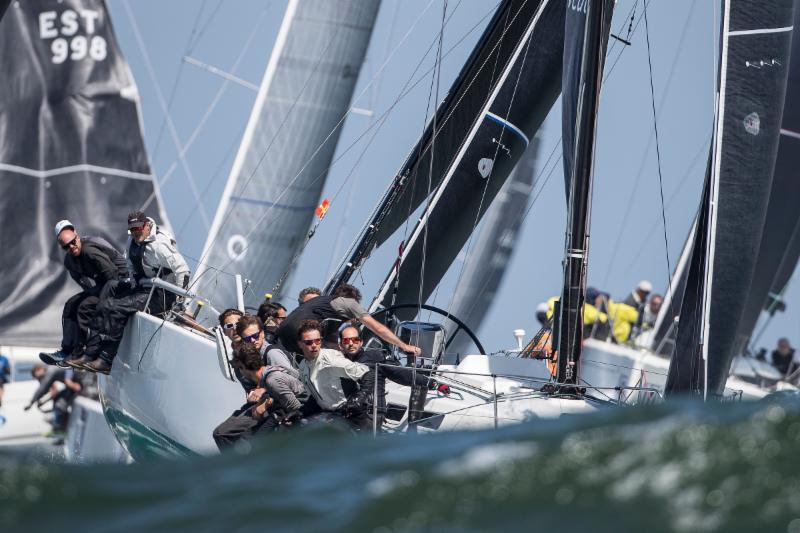 Big waves and breezy conditions made for fast

In contrast to the past few days of light shifty winds, today's superb 12-17 knot southerly breeze made for fast and furious racing on all courses of The Hague Offshore Sailing World Championship 2018. And so even with a later 1300 start today, Principal Race Officer Peter Anink informed everyone two inshore races would be held to take advantage of the favorable conditions.

The southerly breeze combined with a south-flowing flood current to bring even more pressure on the water as well as some big waves, so all teams had to be at their best to avoid being over early at the starts and running into turning marks. With an impressive crowd of 49 boats on the start line of the south course area, Class C was particularly difficult to control, but had only one general recall in the day's second race while the A and B classes in the north course area had no start problems at all.

Continuing to perform like a well-honed machine, the Pac 52 Team Beau Geste (HKG) sailed well again today and put two more bullets on the scoreboard. Skipper Gavin Brady had compliments all around about the event, the venue and the racing.

“In seven years of international campaigning, this has been the most friendly venue for support for our team. And we really enjoyed that long race…12 knots, flat water, clear skies: Karl said it was champagne sailing. If we had more races like this we would have more people in the sport for sure.”

On the inshore races today, Brady said the competition with Tilmar Hansen's rival TP 52 Outsider (GER) has been helping to push them. “We were trading leads today, and as they keep getting better and better as they learn their new boat, we have to keep our game high.”

Another Class A team that proved a threat to the two 52's was Bas de Voogd's Carkeek 40 Hitchhiker (NED), earning a second in the first inshore race of the day by defeating Outsider by only a few seconds in corrected time. This team has roots in the local Dutch offshore sailing scene having campaigned here for years, but recently with this boat has been active in the UK on the Fast 40+ class circuit.

“This has helped us learn a lot and improve our teamwork,” says de Voogd. “But we made some changes to the boat last winter and are still getting used to them.” Specifically, the team moved the rig aft 40 cm in the boat and moved the rudder forward 30 cm to improve their speed in class racing. Yet in the breezy conditions of today in high-speed offwind sailing with waves, a condition they haven't seen much in the Solent, they had some control issues in the second race.

“We're having a lot of fun in these waves, we just need to do more work on understanding the controls with the new set-up,” he said.

In Class B the winner of the first inshore race was Harold Vermeulen's MAT 11.80 Leeloo (NED), whose wild orange and black graphics make her hard to hide on the race course. This good result temporarily pushed them up into second place in the standings behind class leader Santa, Claus Landmark's Landmark 43 from Norway. But a weak 17th place finish in the second race pushed them back into fifth…down, but certainly not out of contention, and the thrill of racing in fresh breeze and waves kept the team in buoyant spirits.

“For us this wind is so cool, we're a planing boat, so we sail very fast,” said Vermeulen. “The first race went great, but we had a bad start in the second race, even though we managed to win something back. But one result doesn't do a lot in this fleet, the racing is so close. For us it's going to be tricky to score well in all the conditions we're up against this week because our boat isn't optimized like many others in our fleet. We're just enjoying a great week of sailing, and for the scoring it's so far, so good.”

The team currently lying second in the Class B standings was not happy after yesterday's long race results and felt the event was sliding away from them.

“We were not happy that the long distance race had so much points value and had so much reaching and seemed to favour the boats with asymmetric spinnakers,” said members of Martin Estlander X-41 Xini Freedom (FIN) last night. And yet this team has been a proven performer from years of one-design racing in the competitive X-41 class and they have used these skills to do well in many European and World Championships. They showed that today in earning their share of tied 4th and 2nd places respectively, in the first and second inshore races. It's no wonder that two other Baltic-based X-41's are also in the top ten – Tiit Vihul's Olympic (EST) in fourth and Soren Junker's Nexus (DEN) in 9th.

Top-ten excellence in windward/leeward course racing has also helped the team lying now in third place in Class B, Alex Sastre's Farr 40 Mr Brightside (NED), on the strength of two 5th places in the offshore races and scores of 2-9 today.

In Class C yesterday's leader, Patrik Forsgren's modified First 36.7 Pro4U (SWE), did well enough to continue to stay atop the leaderboard, but they said it has not been without effort.

“This is an incredibly tight fleet,” said Anders Bjork, spinnaker trimmer on Pro4U. “You make the smallest mistakes and you're going to be out of the top ten easily.”

The mistake they made today to push them back into 13th in the first race was once again hitting a mark, this time the leeward gate, and then having to do a penalty turn before continuing on the second upwind leg. But the team is upbeat and confident.

“We are actually happy with the scoring in both IRC and ORC, and find it to be pretty fair. The teams that are sailing well are enjoying close racing, and this is the way it should be at this level.”

Sometimes this close inshore racing gets too close, and the International Jury chaired by Jan Stage had tonight to sort out five protests, all involving Class B and C competitors. Unfortunately Willem Ellemeet's Dufour 40 Flying Dolphin (NED) was caught in the net and penalized DSQ for a port-starboard incident with Alain Bornet's J/109 Jai Alai (NED) in Race 2, driving them from being 3rd place in the standings to much deeper and allowing Kai Mares's Italia 9.98 Immac Fram (GER) to take their place.

Xini Freedom is also in the protest queue tonight, so the morning may reveal new top three standings in Class B too…or not.

Tomorrow inshore racing continues, with an earlier start time of 11:00, and a wind forecast in the light to moderate 7-11 knot range. The first race tomorrow will be the fifth in the series, and thus the worst scores among all but the long offshore race will be discarded to further shuffle the standings. The remaining five inshore races scheduled will need to be completed by the final day Friday.