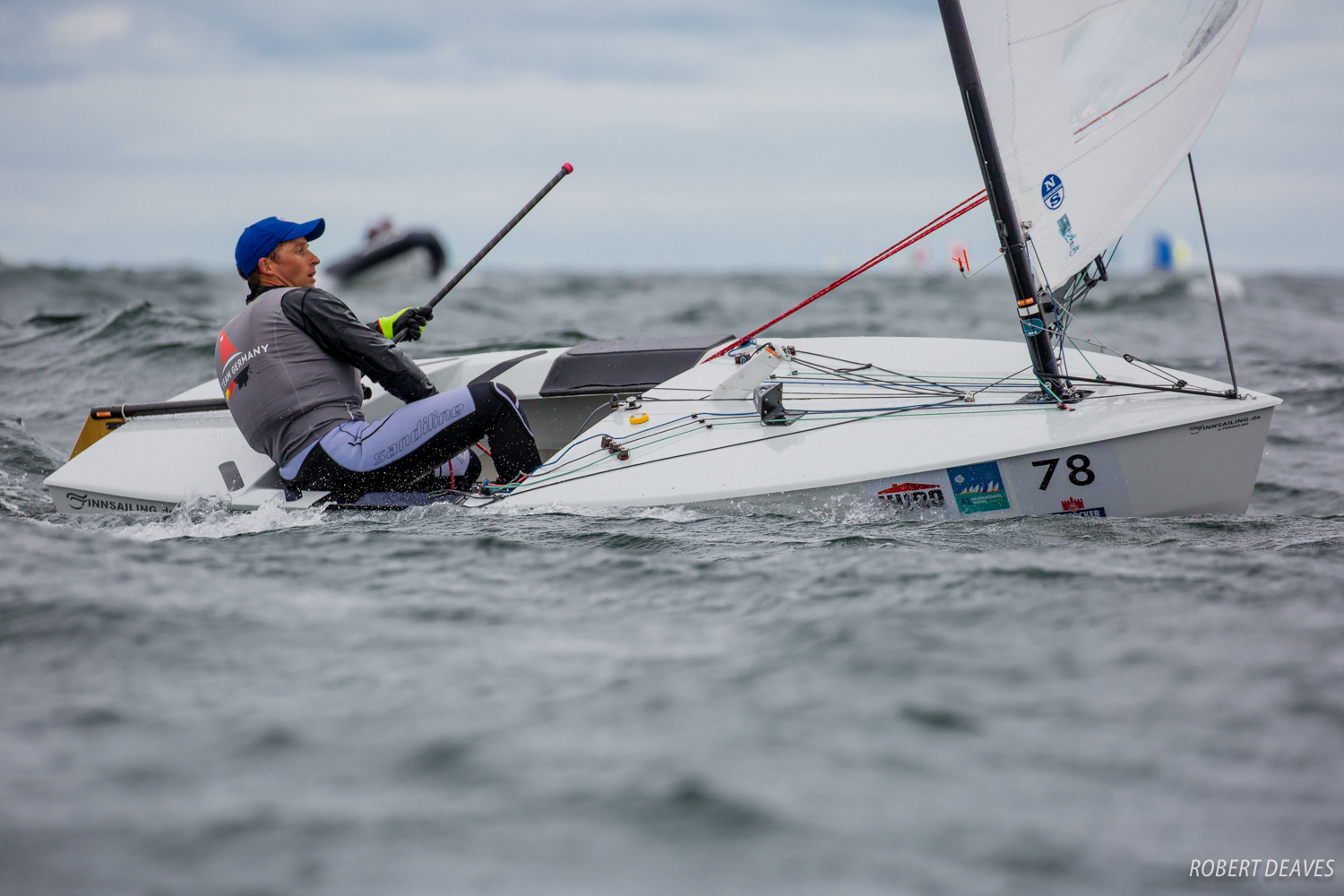 A tight finish was expected, but no one expected the final day of the OK Dinghy World Championship to be at tight as it turned out and after two thrilling and close races, Andre Budzien claimed his third OK Dinghy world title.

Budzien finished with exactly the same score line as Fredrik Loof, the tie being broken on the result of the final race. Jan Kurfeld took the Bronze after a premature start in the final race cost him the title.

After a week of close competition, the world title came down to three sailors. The conditions on the final day in Warnemunde were perhaps the best yet with 14-18 knots of breeze with perfect waves. The only thing lacking was the sunshine, but that didn't really matter.

Jan Kurfeld made the first strike with an impressive win in Race 7 from Budzien and Thomas Hansson-Mild. Loof was up there for a while but dropped to fourth at the finish. Going into the deciding race, there was one point separating the top three and it could not have been closer.

Kurfeld was again the pace maker, leading the fleet around the course. Loof was challenging hard and at the final downwind was pushing Kurfeld tack for tack in an attempt to force a mistake and a chance to pass. This pushed them both to the right side of the final beat, and this allowed Budzien the chance to escape to the left and make up some ground.

Coming into the finish, it was really close and the three boats approached the finish line from different directions. In the end Kurfeld crossed just seconds ahead of Budzien with Loof 10 seconds back in third. It was perhaps the closest finish to an OK Dinghy world championship ever.

However Kurfeld was world champion for less than 30 minutes until it emerged that he was a premature starter. This left him third overall while Budzien and Loof had exactly the same score line. Countback of results failed to break the tie, so it was decided on the result of the final race. Loof’s decision to attack Kurfeld rather than defend against Budzien had cost him the title.

But what an incredible finish; it was a close, exciting finish by three outstanding sailors; a brilliant display of boat handling, tactics and intense competition.

Budzien commented, “First I am really happy to have won this world championship for the third time now. It was a long and hard week and I never had so many strong competitors with me. It was really nice to race against Jan and Freddy and also the others in the top 15 are really strong.”

“The conditions were nicer than we thought. We had one day without sailing, but the others were perfect and it was a really tight victory in the end.”

“At the end we have two winners; or even three.”

Speaking about the current success and growth of the class she said, “Last year Jan started to think about OK sailing and it makes good sense if you are out of the Olympic circus and have not much time, then the OK Dinghy class is the best singlehanded class to sail, which has a special performance.”

“I think the class will grow in the future much more than we think at the moment.”

Is it time you found out what it means to be OK?