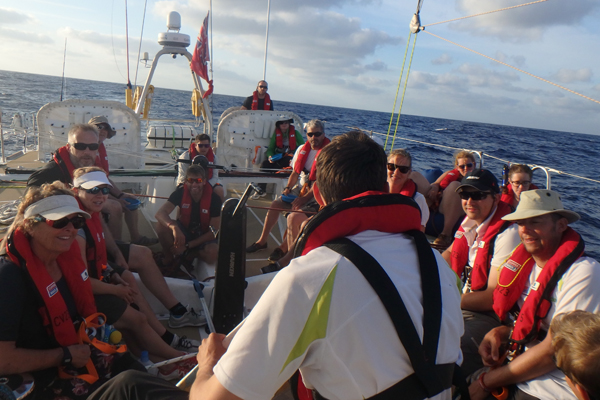 More ceremonies with King Neptune have been taking place as the leading pack crosses the Equator.

Garmin, Derry~Londonderry~Doire, GREAT Britain and Qingdao have all crossed into the Southern Hemisphere.

The frontrunners are now in stronger southerly Trade Winds and are making good progress to the finish line in Rio.

The yacht with the shortest elapsed time for the Ocean Sprint will be awarded two points and will receive the Andy Ashman Memorial Plate which will be presented in Rio.

Derry~Londonderry~Doire Skipper Daniel Smith describes the fast conditions as his team travels upwind at an angle.

“We have been on port tack for over a day now sailing close-hauled and rocketing upwind.

“As the Trade Winds swing as we head south, we should be able to ease our sheets.

“At our lunchtime meeting today we had an unexpected visitor: Neptune himself announced that he would be arriving tomorrow to hold court. His Queen was also coming and that all Pollywogs should prepare to entertain him. My crew also announced that they thought I should helm over the Equator which I really appreciated and enjoyed in a steady firm breeze under a starry sky at 0401 UTC.”

We must apologise that the Race Viewer calculation of distance to finish and therefore position may be misleading as it is measured to waypoints on the drawn route. Now that the leading boats are to the west of this, effectively cutting the corner off the drawn route, this is causing an issue which is being addressed and will be rectified. So please take a look at the map positions for the actual fleet positions, rather than the Race Standings.

In the back half of the fleet in the Doldrums Corridor, the Inter Tropical Convergence Zone (ITCZ) has reformed behind the last tropical depression between about 6 and 9 degrees north, and will probably start to drift north tomorrow, which will mean that the northerly boats should get through it sooner according to Simon Rowell, the Clipper Race Meteorologist.