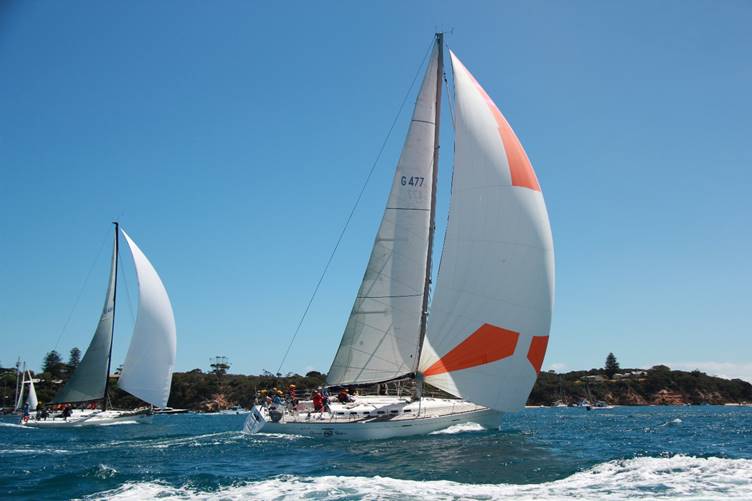 OCEAN SKINS shortly after the Melbourne to Hobart start off Portsea

In the light Southerly winds of 5 to 10 knots in Central Bass Strait, Tony Fowler and his crew onboard the Beneteau First 47.7 OCEAN SKINS from Royal Geelong Yacht Club have elected to go on the West side of King Island on their way to Hobart in the Wyndham Harbour Melbourne to Hobart Westcoaster.

We will have to search the archives for the last time a yacht took this route – we understand it has been done once before, many years ago but the result was not good.  The route they have chosen is a festive one as they are currently abeam of New Year Island and about to pass Christmas Island which are both off the North West side of King Island.

OCEAN SKINS will travel at least an extra 20 nautical miles and may get some assistance from local shore breezes.  Any additional breeze in these light conditions can make a huge difference.  Another consideration is the tide which can really rip through at speeds up to 5 knots in the slot between King Island and the North West tip of Tasmania at different times of the day, so if they thought they were going to be in the slot with tide against them, going around King Island would avoid that adverse tide.  Time will tell if the gamble pays off.

We have just received this message from the OCEAN SKINS Skipper Tony Fowler:

After a challenging evening consisting of an inconsistent sea state and variable wind conditions OCEAN SKINS found ourselves looking at the west of King Island for an option to head south to Hobart.

At 5am this morning the Skipper Tony Fowler summoned his crew (Andrew Gage, Tim Holzer, Brian Pattinson, Jason Boyle, Tom Hasner, Simon Rice and Dale Laurie) to discuss the route via the West coast of King Island, acknowledging the position of the other boats and the likelihood of us not catching and passing them, the call was made to go it alone out West.

Tony shared his learnings with the crew from what he had taken in at the ORCV pre-race long range weather briefing which he had never discounted and coupled with our current conditions and location combined with the most up to date weather forecast the decision was made.

Two hours later, despite early unfavourable conditions, we now find ourselves on the one tack planning to hold it possibly as long as to the Derwent River.

In the next 6 hours we will learn if our tactics have been successful as the fleet converges south of King Island.

The tracker shows Line Honours favourite EXTASEA (Paul Buchholz) still leading the way followed by ONE FOR THE ROAD (Gary Prestedge), then SPIRIT OF DOWUNDER (Laurie Ford) and BLUE CHIP (Ian Lewis) on top of each other.

The rudder Cup Melbourne to Devonport race is shaping up to be one of the closet finishes of all time with the three lead yachts PECCADILLO (Charles Meredith), TEVAKE II (Angus Fletcher) and MERLION (Eddie MacKevicius) within 5 nautical miles of each other, following by the chasing pack of HALCYON (Chris Tucker), WHITE NOISE (Daniel Edwards), BACARDI (Martin Power) and BIDDY HU II (Paul Lindemann).

Bass Strait is known to yachties as The Paddock.  This year’s blue-water classic Wyndham Harbour Melbourne to Hobart Westcoaster and Rudder Cup Melbourne to Devonport ocean races will be one of the mildest Paddock crossings we’ve seen for some time.  Crews are hoping for a little more wind later today.