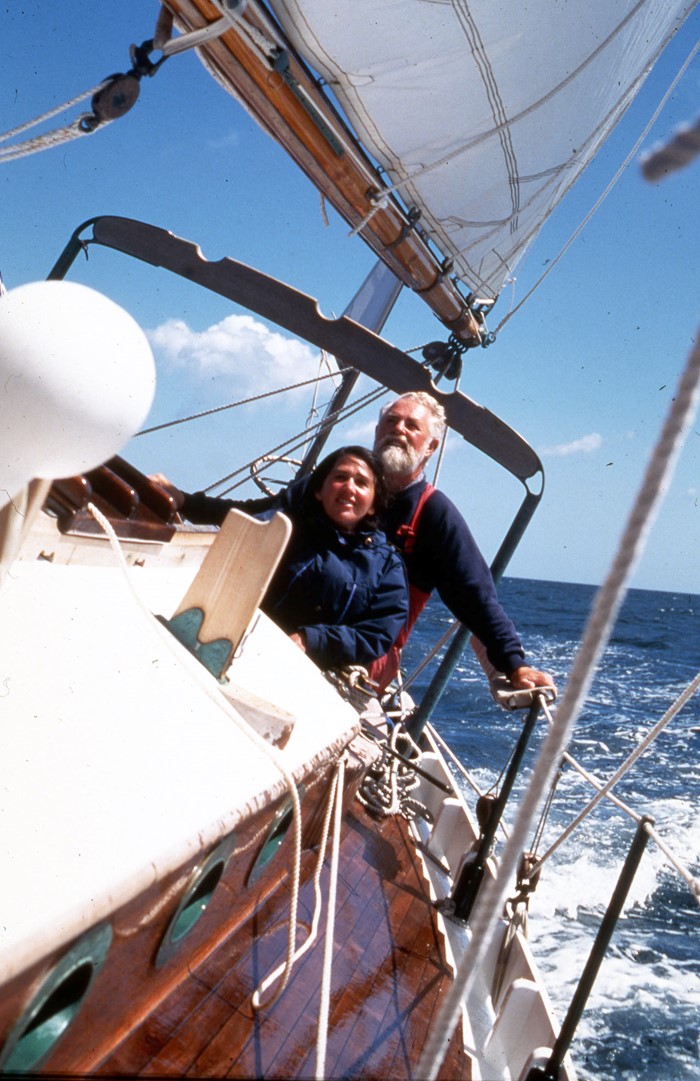 The Awards Sub-committee received an outstanding range of suggestions, resulting in very worthy winners in all categories. They are:

THE BARTON CUP – Bill Hatfield, L'Eau Commotion
For his recently-completed westabout circumnavigation south of the three Great Capes, which included a particularly difficult and protracted passage around Cape Horn.

THE OCC SEAMANSHIP AWARD – Dustin Reynolds, Tiama
For his outstanding courage and tenacity as a double amputee in setting out to circumnavigate alone. Currently in South Africa, he is already halfway there.

THE OCC JESTER AWARD – Szymon Kuczynski, Atlantic Puffin
For his 270-day non-stop singlehanded circumnavigation via the three Great Capes, in a boat of only 6.36m (just under 21ft) LOA and with no outside assistance, a new world record.

THE VASEY VASE – Sue and Andy Warman, Spruce
For their exploration of Japanese waters, described in a very informative report for the OCC Forum, followed by their passage north to Alaska and then on to British Columbia. Visit their website here and read their blog here.

THE OCC AWARD (member) – Dick Guckel
Primarily in recognition of his more than 20 years' service to the OCC, including founding the e-Bulletin and editing it for more than two decades, as well as his seven years' service on the Committee and as a Flag Officer. Dick has also been nominated for election to Honorary Membership at the 2019 AGM.

THE OCC AWARD (non-member) – Des Cason
For the highly professional weather and routing advice which he offers, free of charge, to yachts approaching and on passage down the east coast of South Africa, a notoriously difficult stretch of water which would be even more challenging without his assistance.

THE WATER MUSIC TROPHY – Mike Norris, Island Drifter
For the practical information incorporated in his and Helen's two articles on cruising Greek waters already published in Flying Fish (with another submitted for the next issue), as well as their regular and detailed blog. (Helen is not a member, or this would undoubtedly have been a joint award).

THE EVENTS AND RALLIES AWARD – José Azevedo
For his pivotal role, as owner of Peter Café Sport, in initiating and facilitating last June's Azores Pursuit Rally – probably the largest gathering of OCC yachts in the history of our Club. José has also been nominated for election to Honorary Membership at the 2019 AGM.

THE PORT OFFICER SERVICE AWARDS – Mary Schempp-Berg (PO Whangarei, NZ), Dianne Tetreault (POR Beaufort, North Carolina) and Agustín Martin (POR Las Palmas, Gran Canaria)
A record number of nominations were received for this Award so, as in some previous years, the decision was made to present more than one. All those nominated were praised for their friendly and helpful attitude towards visiting members but Mary, Dianne and Agustín were judged to be outstanding.

THE DAVID WALLIS TROPHY – Ellen Massey Leonard, Heretic and later Celeste
For her article A PENCHANT FOR THE PRIMITIVE: REFLECTIONS ON SPENDING MY TWENTIES AT SEA, which appeared in Flying Fish 2018/2. Notably well-written and beautifully illustrated, it struck a chord with all on the Flying Fish Editorial Sub-Committee.

THE QUALIFIER'S MUG – James McCaughan, Seamogs
For his transatlantic passage as skipper of Seamogs, a family-owned Nicholson 48. None of the five aboard had made an ocean passage before, but they demonstrated sound seamanship and obviously enjoyed the experience immensely. VIGO TO VIRGINIA: SEAMOGS AND THE PRUDENT MARINERS will appear in Flying Fish 2019/1.

Finally, could I record my thanks to Fiona Jones and Eoin Robson, co-chairs of the Awards Sub-committee, and to their anonymous panel of judges from around the world. Anonymous because they may well be called upon for the same duties next year, but they know who they are … and thank you!

Best wishes to one and all, and congratulations to our outstanding Award Winners.