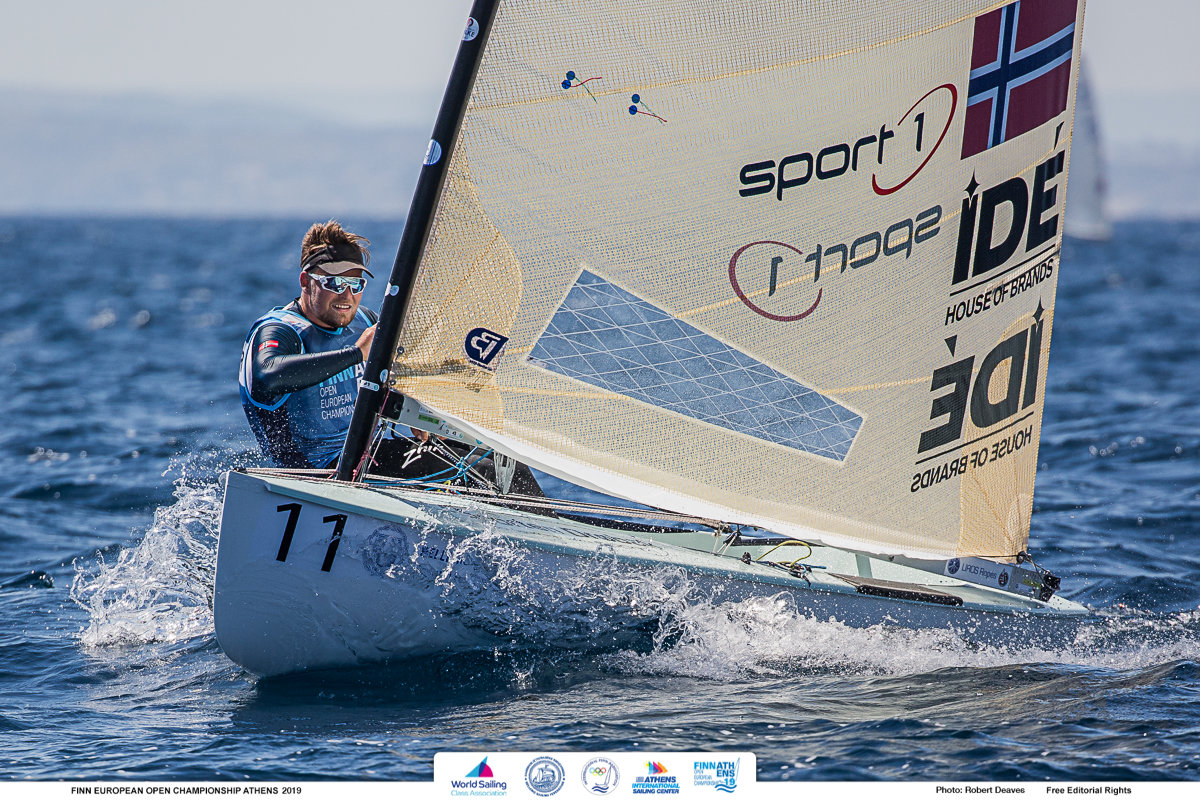 Norway and Brazil secured their places at the Tokyo 2020 Olympic Games as the penultimate day of the Finn Europeans in Athens was abandoned late on Friday, with no more races sailed due to very light wind all day.

Olympic champion, Giles Scott from Britain, will go into the Medal Race with a 15-point lead over world champion, Zsombor Berecz from Hungary, in second. America’s Cup winning crew, Andy Maloney (NZL), cannot win Gold, but can take the Silver. The medals can only go to these three champions.

Behind them, the battle for the remaining two Olympic places is intense, with seven countries in the next nine places hoping to qualify, and with 35 points between them. At the moment, the two spots are occupied by Switzerland and USA, in 11th and 12th, but the points are really close in the chasing group, so everyone will have to be at the top of their game. It is two down and two to go.

The fleet of 84 Finns from 33 nations had a long day of waiting on shore followed by a brief excursion onto the water, only to be turned around as storm cell appeared from Athens. After a further wait onshore racing was abandoned for the day around 18.30hrs.

Anders Pedersen, from Norway, sailed his first Olympics in Rio, and today qualified his country for Tokyo.

“It was a long day of waiting. It’s a huge relief, and takes some weight of my shoulders. I didn’t have a very successful Aarhus event, and made some stupid mistakes in the end and was just out of the qualification, so to manage to do it here was a good feeling as there are really a lot of good nations who haven’t qualified, so for sure it was good to be on top.”

“The range (in the fleet) is really wide. There are a lot of nations with really good sailors and unfortunately we are going to see a lot of them missing out on the opportunity to sail in the Olympics.”

“It’s been a rough week. We had a bit of everything. It’s been racing with 90 boats again it’s always a challenge to get of the starting line and find your own track and keep free and have a good race but I managed it I most of the races. I made some mistakes as well, which was not so good but in the end, luckily I managed top ten.”

Jorge Zarif, from Brazil, will go to his third Olympics in a row if he can also satisfy his national criteria.

“I think I still have to finish top 15 or top 18 at the Worlds in Melbourne to qualify or in the next Worlds. Before we used to have trials in Brazil until 2016, but now it’s the Federation that selects who goes. So I am in a good spot to go to the Games and I am sure it will happen.”

“It feels good. I would have liked to race. I think it’s not that nice to qualify in this way, but I am happy that I made it. I will just focus on the Finn now. No TP52. No Star and try and improve until the Games. It’s short time to the Games, only a year and three months, and there are still a lot of things where everyone can improve their game.”

On the week “It was pretty hard regatta. It was different from the days we had before the regatta, when we had a really good sea breeze. I had a terrible start over the first two days and then I had a good day yesterday, so happy I made the medal race. It wasn’t the best of my regattas, but the target was to qualify the country, so it’s OK.”

Another sailor celebrating is Nicholas Heiner, who has won the Dutch selection for Tokyo after overcoming triple Olympian, Pieter-Jan Postma.

“Happy days. The racing has been pretty tricky with only three days sailed out of the five. That said, we don’t have the weather under our control, but the racing we have had has been really close,” Heiner said.

He is too far adrift to take a medal. “It’s a decent result, but not where I wanted to be. I wanted to be a bit closer to the leaders, but it is what it is.

“With the system we have you only get points in the top ten Last time (in the Laser) into Rio, I became world champion during the trials and I ended up not going to the Games. We had the same system this time round.

“PJ is a great competitor; he has been on the podium many times. Basically all we could do is our best and focus on the progress and the results would come from that. I think we have shown really consistent results and that brings a lot of confidence. But I still needed to finish it off here.”

He was runner up at the Europeans last year. “Great to have Olympic selection, but would have been nice to have been higher on the podium here.”

He says it’s nice to qualify this early. “You never know what happens in two years times and now it’s a year before the Games and a lot can happen. You can really focus on the process leading into the Olympic Games.”

On Saturday the focus will not only be on the final two spaces, but of course on the Europeans titles. Scott has a 15 points lead over Berecz, who has a seven point lead over Maloney. Gold will go to Scott or Berecz, while Berecz and Maloney will fight for the silver. Only these three can win the medals.

For the U233 European title, the defending champion, Nils Theuninck, from Switzerland is 36 points ahead of Joan Cardona, of Spain. Oskari Muhinen, from Finland, is a further 26 points back.

Scott said, “Good position to be in, but still a bit of work to do tomorrow.”

On his form this week, “I have been pretty pleased with the way I have sailed. In the most part I was pleased with the way I sailed I Palma as well. Andy (Maloney) put together an amazing week as well, so I am happy with where I am at and back into Finn sailing now which is good and hopefully a little a bit of rust that I may have developed is beginning to be shaken off. “

On focusing on the Finn campaign, “It’s still very much a balancing act with the various campaigns. Everything on the America’s Cup side will begin to ramp up over the next 18 months, as obviously will the Olympic side, so it will take a bit of time management, but I am sure it’s all doable.”

On the Medal Race, “Zomby has 15 points to take out of me, do I’ll have to keep an eye on him in the medal race and see how it plays out.”

On Saturday the final race has been scheduled for 11.00hrs, followed immediately by the Medal Race. The forecast would seem to indicate good wind at that time. Live tracking is available through YouTube and SailRacer on the event website 2019.finneuropeans.org

Racing is scheduled to start at 13.30, with live tracking available through YouTube and SailRacer on the event website 2019.finneuropeans.org