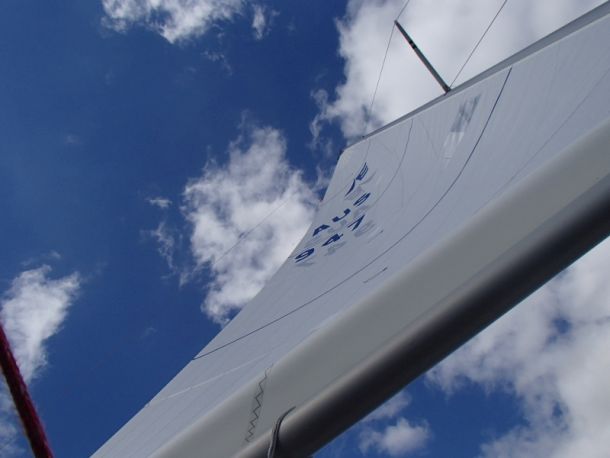 North Sails Australia will show case their newly designed TKR mainsail at this year’s Marinepool Etchells Australasian Winter Championship which is being conducted by Mooloolaba Yacht Club from June 4 to 7.

It’s taken two years of research and development with some 16 versions tested by North Sails directors Michael Coxon and Richie Allanson to reach the point where they recently introduced the new radial mainsail into their standard models on offer.

“Originally we were testing a new radial jib and mainsail design in unison. Having two variables meant that it was difficult to draw conclusions to our testing. What we decided to do last year was to put the jibs on hold and to focus on the radial mainsails so that when we tested we were always testing with one of our proven model of jib and then we could accurately evaluate the development TKR mainsail,” Coxon said.

The TKR or Tom King Radial was developed with the hands-on involvement of the 470 class 2000 Olympic Gold Medallist skipper and 2012 Etchells World Champion skipper. The whole radial working sail development program has come about as a result of North Cloth developing specialist warp oriented one design materials built to the Etchells class minimum cloth weights.

With the mainsail design bedded down the team will use the winter championship to focus on further developing the radial Etchells jib models. The plan is to develop both a lighter air radial jib and a heavier air radial jib.

“The Winters are a good sail testing venue and for those planning on competing in the worlds in Hong Kong, the conditions won’t be dissimilar.

“We aim to get up there a couple of days earlier and spend quite a bit of time out on the water. We find Sydney is not the best place to do winter testing as there tends to be at this time of year too much wind or too little,” Coxon said.

As the two test boats owned by Coxon and by King have been sold, and with replacement new boats still to be ordered by the two skippers, Graeme Taylor and some other of the regular North Sails Etchells sailors will put the test jib to work in Mooloolaba before the decision is taken as to whether to card the test jib for the regatta.  Coxon and Allanson will oversee the testing while they continue to look for a boat to loan for the regatta.

Coxon said North Sails will continue to offer their clients the choice of our three world championship winning PC range of mains which suit each type of Etchells mast and are in addition the TKR main. “We let the market make the decision on which model they like to use and which models we stock as standard on the shelf.”

Also on display will be the new spinnaker designs which were finalised last year with refined panel layouts and new materials.

For more information on the range of North Sails Etchells sails, go www.au.northsails.com