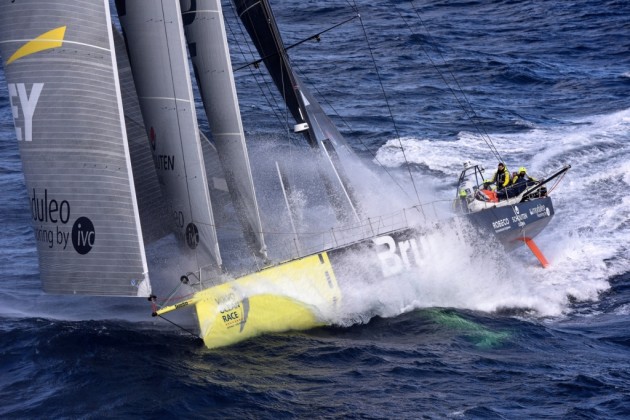 The durability of the Volvo Ocean 65 has already become a byword in the industry for its reliability and North Sails 3DiTM product has become synonymous with durability as well, powering six teams over 40,000 nautical miles in the last race with a ground-breaking, limited sail wardrobe.

Nick Bice, who heads up The Boatyard maintenance centre at the Volvo Ocean Race, explained that the success of North Sails in renewing their partnership with offshore sailing’s leading event was no foregone conclusion.

“North Sails was chosen against a lot of different criteria and not necessarily because of a long history in ocean racing and the Volvo Ocean Race,” he said. “Many elements have contributed to the final decision, including the simple fact that the North Sails 3DiTM product is very good. The company has a strong commitment to the next edition of the race, not only from a product but also a personnel point of view.”

North Sails President, Ken Read, added: “The Volvo Ocean Race has been and remains a big part of my life having participated in three editions. North Sails also has deep roots in this race, powering eight of nine race winners since Steinlager 2 in 1989.

“Performance and durability are a prerequisite for every part and piece of the new one-design boats. Proven as the highest performing and most durable sails ever made, North Sails’ patented 3Di product fits the bill perfectly.”

The next step is to finalise designs for the Volvo Ocean 65 sail wardrobe, which will be carried out once the 2017-18 route is confirmed by mid-2016. After that comes the manufacturing process, followed by the delivery of the sails to the 13th edition teams in April 2017.

Currently, practicing crews may use new or used ‘generation 1’ designs for independent training as well as two-boat testing. Race rules will not permit two-boat testing when the new inventory is delivered next April.

“The idea is that all teams will match up for the first time on the start line in Alicante, all with the same amount of knowledge,” said Bice.

What sort of improvements can we expect to see with the next generation sail wardrobe?

“The sails will continue to be reliable, that is a big factor. There will be improved flying shapes based on what has been learned about the boats and a customised wardrobe depending on the race route.”