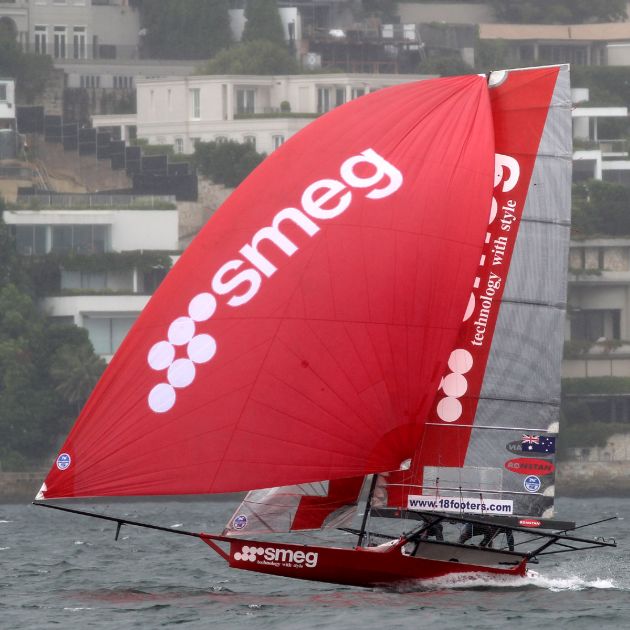 Smeg on the way to winning the club championship series. Photo 18 Footers League.

“The International 18 Foot Skiff Class was born in the 1890s in Australia to satisfy a need for a boat within the means of the ‘average man’ to provide good, competitive racing to attract public interest.”

So state the class rules which have been framed to uphold the philosophy for over 120 years.

I raced 18 Footers in the 1970s and early 1980s. I joined North Sails in the late 70s and we have been active in the class and principal sail supplier ever since. In the early days we built Dacron sails, introduced the first Kevlar sail used in Australia on my 18 and today our standard is our fully moulded 3DL working sails with 3Di moulded sails being tested this season.

Ten years ago North moved to carbon rigs from aluminium and moulded 3DL sails from panel, bringing the 18s up with the grand prix yacht racing technology of the times.

The single biggest development in rigs was the move from a choice of four rigs back when I was sailing to two rigs in the 90s to reduce costs, and the introduction of stiffer carbon masts mid-2000 which has allowed us to build bigger profile and area sails.

For the last three years we’ve been testing a single spreader rig with Gotta Love it 7 and more recently Noakessailing. This rig offers lighter weight with less windage and while I think that’s the way the rigs will ultimately go, the conventional two spreader rigs are simpler to set up on the water.

18s tend to follow the trends of Grand Prix yacht technology and the GP fleet is taking advantage of North 3Di thermo moulded sail technology. We recently tested 3Di on 18s in both the Australian and NZ fleets and they met our high expectations on both light weight and durability. We are developing and shall be introducing a competitive priced 3Di skiff product in the near future that will offer better sail value through longevity.

After the professional 18 circuit ended back in early 2000 the crews were reliant on huge sponsorships and the class was in decline. Today it’s in the unique situation of not having enough skilled crews this past season to satisfy sponsor interest. The league owns all the boats and trailers and sets the rules to keep development under control and costs down. This foresight of the class and 18 Footer League management must be recognised as not only has this stemmed the decline, today we see very healthy fleet numbers racing each Sunday.

The 18ft skiff hulls are one design which means crews can only play with the rig and sails within the parametres, the key rules being;

b) The Spinnaker Pole shall be of a fixed length and shall not extend more than 3.8m and not less than 3.75m forward of the stem.

North went through a number of years developing rigs and refining sails but this has stagnated. The Australian 18s based at Double Bay nominate a Sail Registration Day (SRD) in October where crews are required to nominate and declare their two mains, two jibs, two spinnakers and two masts for the coming season. If their budget allows each skiff is allowed three new sails each season and these registered sails must be used for all racing and training over the season. These rules have the positive effects of reducing operating costs however place pressure on sail and rig development – if you make a step sideways or backwards in development you own it for the season.

Working within the restriction of two rigs to cover from 0 to 30 true wind speed I work with the crew taking into account their overall weight, their development ideas and if they wish to target and optimise specific wind strengths. I believe on average consistency wins regattas and as such aim for good all-round rig/sail performance over narrow range specialised sails.

If you are updating sails at the beginning of the season the Club requires you to hand your past set on to the pool, so the people looking for a better condition sail can make use of them. We help crews select their sails and figure out if it’s going to work with the existing sail plan then recut them to fit.

When I sailed 18s we had four rigs to choose from, they now have two and this means the rigs have to be a lot more versatile. In round terms number 1 rig is 0 to 16 knots and number 2 is 14kts and above. Some boats perform well in a narrow window; others perform well across the board. Our goal with our mast and sail packages is to get crews sailing well across the board, unless a team wants to target a particular wind range.

The end of February, when the season culminating JJ Giltinan 18ft Skiff Championship is on, is a real roll of the card as to what wind the fleet race in. By mid-February the often stronger nor-easters then southerly buster have given way to lighter south east and easterly winds on Sydney Harbour. Do you plan your seasons sail design inventory best performance around the entire season or the JJs?

Some rigs are specialised to down range and on the fresher days they get swallowed up and spat out. If they jag the right conditions it can be advantageous but on percentages over seven races it’s a high risk not to go with all-round rig and sails.

The sail packages have been going larger and flatter; the large gives you down range performance, the flat gives you up range and more high performance with faster top speeds because there’s less drag, a bit like the physics of multihull sailing.

North offers mast and sail packages through our spar manufacturer, Southern Spar, and our number 2 rig has been the class standard for 4-5 years. Our companies are owned by the same parent and as such we share the same design software and talk the same language. For 18ft rigs we use North Thin Ply Technology (TPT) for stiffness gains. Aside from the strength benefits, one of the major gains is weight savings as a result of using thinner/lighter weight plies.

Mast height is controlled by class rules though there are some variables in that you can take the forestay up and down. Forestays are higher now because the carbon sections support longer spans. In the old days when you were too high in your hounds the section underneath wouldn’t support the rig tension.

Double spreader rigs have top stays and spreader then another set of lower spreaders which support the mast going upwind, and forestay tension. The top spreaders support the mast from breaking downwind under spinnaker and they also control the sideways tip bend, which is critical to making a fast 18ft skiff rig that holds its height upwind.

More recently we’ve played with single spreader rigs that eliminate the top spreader, which means less rigging and less windage, and the set up allows the forestay to go higher again. We’ve been playing with this for three years on Gotta Love it 7; it’s not an obvious step forward or as straightforward and some say the school of thought is still out whether you would stick with the conventional or develop the single spreader. Eventually, with enough trial and error I think the single spreader will be the better rig.

A few years ago I introduced the forestay prod that is now the standard in the class. The prod both stiffens the mast and allows us to build a ‘fat head’ jib, similar to the mains, that induces a leech twist profile that marries the mainsail depth and entry.

The last nine JJs have been won by North Sails on Southern Spars and North hasn’t lost a JJ Giltinan Trophy in 12 years. North worked with the Smeg crew who won the latest 2016 JJs topping the extraordinary run of seven championship victories by Gotta Love It 7.

As a business we put a lot of effort in to the 18s both on and off the water which is appreciated by many of the crews. I believe the combination of proven sail designs, rig understanding and on water service keeps us consistently ahead of the pack. I enjoy working with different crews and sharing their ideas and helping them reach their goals.

I wasn’t surprised at all to see the New Zealand team of Yahama finish second at the JJs. The internationals invited to race with the Australian fleet don’t have the same class restrictions and given sailing is an equipment sport, they have the potential to run with more up to date equipment. We are seeing a coming of age of the NZ fleet.

The next step will be 3Di sails for the 18 Footers, which is now the norm in the grand prix yacht market. In the 18ft class the slower pick up is simply because new products add to cost. North can deliver more development to the class and make a better, stronger product that holds its design shape longer. Working with the club, this shall come with time.

For the 2015-16 season we built Noakesailing a test 3Di mainsail and jib with the consent of the club. We developed a sail plan around Sean’s brief to make a single spreader rig on the light side for his light crew weight. With the JJs now behind us Sean and I are back on the water testing variables on the development rig taking advantage of what we have learnt during the season in preparation for next season.

My calculated optimum crew weight for sailing an 18 is 255kgs and Noakessailing sailed in the JJs at 225kgs so it’s hard to draw a comparison based on results although Sean and his young crew showed some good form in some races. 3Di will be the future. It will offer more longevity, and we believe that’s in the class’ best interest, and as we become more efficient at engineering and designing them for the lower load skiffs the price is becoming more attractive. I hope the technology will be viable and available to all within the next 12 months.

I’m always working on something behind the scenes. I’ve been playing with a different spinnaker shape, more along a VOR spinnaker design. I’m not sure it will work because there’s no substitute for area which is governed by the physical triangle of an 18f skiff mast, pole and sheeting, and to build a Volvo spinnaker means reducing area significantly, which means you reduce power and depth. It will be fast at various points of sail but it comes back to the question, do you want a good all-round sail or a very fast one?