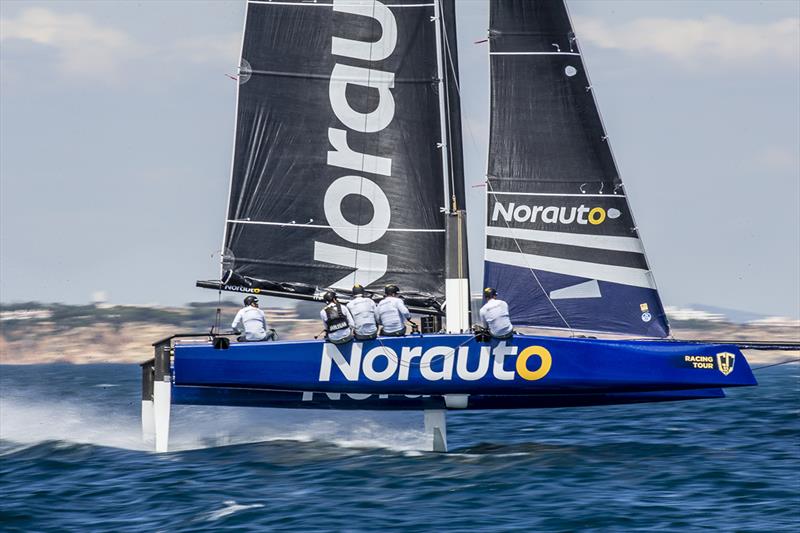 Lagos laid on a tricky second day of racing for the eight foiling catamaran teams and race officials alike. The wind started further left than forecast, but as the afternoon wore on it veered by 90°, back into the prevailing northwest and built into the teens as the skies darkened. While out to sea the beginnings of a water spout appeared.

Despite this, and the various ‘holes’ that appeared on the race course as the wind began blowing offshore again, Franck Cammas and his Norauto powered by Team France crew remained unflappable, scoring bullets in today’s first two races.

The only minor blemish on her otherwise impeccable string of podium finishes was a fourth place in race three. At this halfway stage of the GC32 Lagos Cup, the second event of the 2018 GC32 Racing Tour, the French America’s Cup team has pulled out an 11 point lead.

“Today in the first two races we did well anticipating the correct side of the course: The right side was better, where there was a right shift and that worked twice. The boat was fast – we managed to get ahead even if we weren’t starting well,” Cammas said.

He added that they were sailing better in the lighter conditions than during last month’s inaugural GC32 World Championship on Lake Garda.

Cammas is also enjoying being chased by his old America’s Cup crew, many of whom are now racing on board Erik Maris’ Zoulou. Is there any rivalry? “I hope not, but the last start I think they blocked us a little too long.”

Occupied with work commitments yesterday, Erik Maris returned to helm his GC32 today. After a disappointing first couple of races, including one where he received two penalty points for an incident with Realteam, the French veteran one design skipper found his form again, posting a 2-1-2.

“It seems really nice with flat water and good wind,” observed Maris of his first day racing out of the Algarve port that is making its debut on the GC32 Racing Tour this season.

“It is a little tricky and you can’t bang one corner which was mandatory in Riva. Here it is wide open. I was very impressed with the way Franck [Cammas] was sailing today – he was either well ahead of everyone or if he was back in the pack he would pull up. It is going to be very difficult to stop him.”

Although conditions were lighter today and teams didn’t manage to improve on yesterday’s speeds, Zoulou came out on top during today’s round of the ANONIMO Speed Challenge.

While Cammas is showing some of his 2016 GC32 Racing Tour winning form, Jason Carroll’s Argo is too. As yesterday, the US team won the final race of the day and did so in commanding style. This broke, in their favour, a three way tie for the top spot on the Owner-Driver leaderboard that existed going into the final race.

The Sir Ben Ainslie-skippered INEOS TEAM UK is still finding its feet but after some appraisal yesterday evening returned to the race course all guns blazing today, posting results all in the top five. They just managed to maintain second in today’s first race as the wind went light forcing them to finish with all the crew to leeward. They went on to win race two.

“We had the second best day in the fleet,” observed Giles Scott, the reigning Olympic Finn gold medallist who is bow/tactician on board. “We are moving in the right direction, which is nice. We feel we have been making a few errors, but are making progress.”

A sight welcomed by all today was that of Federico Ferioli’s Codigo Rojo Racing. The Argentinian team was back on the race course following her dramatic capsize yesterday, sporting a new rig, courtesy of INEOS TEAM UK, after the top of theirs broke.

“Thanks to all of the teams – they really helped us put the boat back together and we were able to make it to the first race today,” Ferioli said. To achieve this, the Argentinean crew had to burn the midnight oil to fit their new spar.

“Fortunately the rest of the boat was fine and we saved the sails. That was good.”

While Código Rojo Racing has been finding its feet in this, her first GC32 Racing Tour event this season, she showed promise in today’s final race rounding the top mark in third place.

Racing is set to continue again at 1300 tomorrow although the wind is forecast to start off in the east in the morning, shifting through 180 degrees. Hopefully this will be before start time.