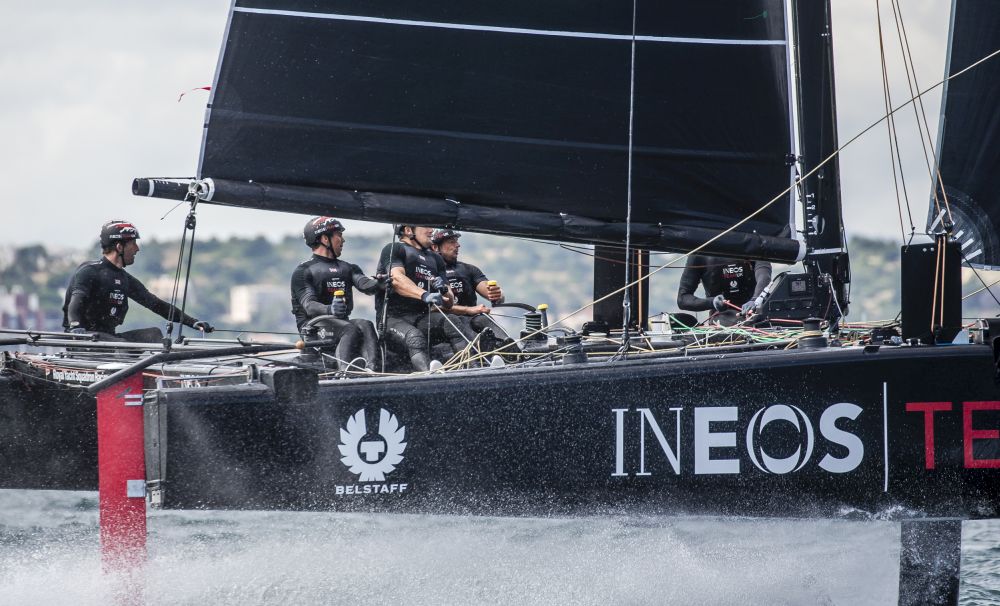 If regatta success comes down to posting consistently good results, the two French teams held a masterclass on day one of the GC32 Lagos Cup, the second event of the 2018 GC32 Racing Tour.

Lagos, making its debut on the GC32 Racing Tour, laid on great conditions today with solid breeze and flat water – ideal for the GC32 catamarans to foil at high speed. With a shifty wind, building from, and eventually dropping back to, 14 knots, Principal Race Officer Stuart Childerley laid courses with reaching starts for the first three races before changing to conventional windward starts after the wind began gusting to 20+ knots.

In these the French teams dominated: Franck Cammas’ NORAUTO powered by Team France and Erik Maris’ Zoulou, helmed today in her owner’s absence by F18 and GC32 veteran Gurvan Bontemps. NORAUTO won two races and was never off the podium, while Zoulou claimed one and her worst result was a fourth. Interestingly these two teams are related, most of Zoulou’s crew sailed aboard Cammas’ last America’s Cup challenger.

“It was challenging for everyone because the wind was unstable and the puffs in the bear-aways were…exciting!” said Cammas. “It was tricky for everyone, but we avoided most mistakes and in these conditions we are confident with our speed. We did well, without taking too much risk.”

Cammas got off to a great start winning the first race by one of the biggest margins ever recorded in the GC32 Racing Tour history and looked like a different team compared to last month’s GC32 World Championship in Riva del Garda. “In Riva we had some bad races with OCSes. Here the goal is only to do good races. Today the goal is not to lose too many points.” Nonetheless NORAUTO’s peak speed was still more than 37 knots. “We were at the cavitation speed of the boat, so that was the maximum I think! It was great, but the boat was moving around a lot!”

Newcomers to the GC32 Racing Tour, INEOS TEAM UK, the British America’s Cup challenger of Sir Ben Ainslie, was still learning the ropes, yet managed to win race two. “We had a frustrating day in the end,” admitted Ainslie, the most successful Olympic sailor of all-time. “We started okay. We had a nice lead in the first race, but we got a bit lost around the course, got overtaken. The second race was a nice one. Then as the breeze built up we didn’t quite get the gear changes with the reef coming in and out and a number of other things didn’t quite work out which is indicative of being new to this class. But we are here to learn and be pushed.”

In the shifty conditions Ainslie said it was all about linking up shifts and puffs.

With ropes, soft sails and no hydraulics, the GC32 is a more regular boat than the AC50 foiling catamaran he campaigned in Bermuda. “The GC32 is much lighter, so its performance is impressive. It is quite twitchy and very physical because you don’t have battery-operated systems and so on. You have got to get your technique and teamwork right and sail well. NORAUTO set the standard today.”

On the ascent was Jason Carroll’s Argo, winner of the fifth and final race. In this, the US team started by the race committee boat and immediately tacked. “We didn’t get the best start, but our plan had been to go right anyway. A couple of shifts on the right side paid off for us on that first beat…” explained Carroll. “We got in our own way a little bit in the first few races. I think our boat speed was good but we executed poorly here. The team is having a great time and we are looking forward to the next few days.”

Argo now holds the third step on the podium and leads the owner-driver competition ahead of the inter-Antipodean battle between Australian Simon Delzoppo and his .film Racing and New Zealander Simon Hull and Frank Racing.

Unfortunately the conditions took their toll with Federico Ferioli’s Código Rojo Racing capsizing shortly after the top mark rounding in windy race three.. No one was hurt in the incident, but the red GC32’s mast broke. This evening, the GC32 Racing Tour community has rallied and Ferioli's team has received three offers of replacement masts. They have successfully secured one kindly offered to them by INEOS TEAM UK which will get the Argentinean team racing again tomorrow.

The big conditions allowed the teams to put in some high average speeds in the opening round of the ANONIMO Speed Challenge where Frank Racing tops the leaderboard with 25.26 knots.