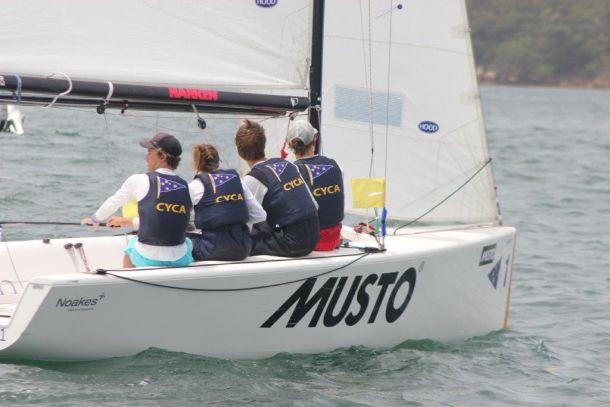 Harry Price watching over his shoulder in prestart at the 2014 Musto International. Photo Credit

The Notice of Race for the Musto International Youth Match Racing Regatta has been released by Cruising Yacht Club of Australia.

In its 14th year this highly competitive match racing regatta is an internationally recognised regatta that will feature some of the very best youth match racers.

“I am looking forward to this year’s regatta and am keen to come up against teams from New Zealand and Noumea,” Price said. “This season has been really good for me and I really hope to keep that form.”

The Musto International Youth Match Racing Regatta will be held at the CYCA from Monday 23 to Friday 27 November, with competitors competing for the perpetual Joy Ride trophy. The perpetual trophy was donated in memory of Gary McPike who owned a yacht called Joy Ride. Gary  was an International Umpire that provided great support to the CYCA YSA.

This will be a certified Grade 3 event for the ISAF International Match Racing rankings.