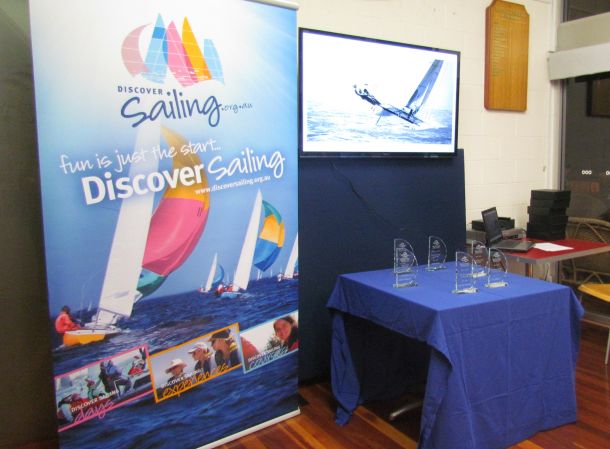 Setting up for the Queensland Yachting Awards 2015. Credit YQ Staff.

The opportunity to recognise the achievements or contribution of a club member has generated an outstanding list of nominations for this year’s Queensland Yachting (YQ) Awards.

YQ Executive Officer, Ben Callard, said of the 51 Queensland clubs, 11 are represented. “We are very pleased with the number of nominations. It’s a big increase on last year.

“The quality of candidates are very high. I know quite a few of the nominees. It is excellent to see some news names as well which is a sign there is a lot of depth and talent around the state.”

Four new awards have added to the list and there has been a change in how the state awards link up with the Yachting Australia (YA) annual national awards. “The winners of the Club, Official, Instructor and Coach of the Year awards are automatically nominated for the YA awards. These are new categories for Queensland.

“We are also going to nominate all other state winners for the relevant national award,” Callard said.

The nominations are considered by the nine-member YQ Board who represent all regions of the state, with the votes recorded anonymously and counted by the YQ staff. “A lot of the votes were very close. There were few cases where there was a big margin where someone was a stand-out winner,” Callard added.

Male Sailor of the Year

Nominations for the Wyuna Trophy for the Male Sailor the Year have been received for six sailors. This award is given in recognition of sailor’s outstanding commitment to their class or attained an outstanding result at a state, national or international level.

Brent Pearson (Keppel Bay Sailing Club) is nominated for his performance at the 2014 Moth national title and then at the World Championship, and for his contribution to his club in the last 12 years as a sailor and instructor.

Steve Gunther (Keppel Bay Sailing Club) is nominated for his success in numerous classes at the national level, podium results in the Impulse class, commitment to the administration of the Queensland Laser Association including securing for his club the 2016 state titles and his dedication to the club’s sailing committee.

Luke Johnson (Brisbane Sailing Squadron) is nominated for his team’s performance in the 125 class state and national championships where they won every heat, and for his volunteer contribution to the class as a member of the national executive and as the state and national publicity officer.

Mark Vickers (Townsville Yacht Club) is nominated for his extensive offshore and regatta competition results over a number of years and for his ongoing dedication to his club and its racing program.

Female Sailor of the Year

Nominations for the Jenny VI Trophy for the Female Sailor the Year have been received for two sailors. This award is given in recognition of a sailor’s outstanding commitment to their class or has attained an outstanding result at a state, national or international level.

Stacey Jackson (Mooloolaba Yacht Club) is nominated for her outstanding results as a member of the Volvo Ocean Race 2014/15 all-women Team SCA, for her willingness to share her personal journey through the race and to inspire other women to achieve their dreams, and her commitment to giving back to her club through the Stacey Jackson Good Sportsmanship Award.

Junior Sailor of the Year

Three young sailors are nominated for the Junior Sailor of the Year Simba Trophy which is awarded to a skipper or skipper and crew, under the age of 15, for their outstanding performance at club, state and/or national events.

Kristen Anne Wadley (Tinaroo Sailing Club) is nominated for her O’Pen Bic wins in the Under 16 Girl’s World Championships for the third consecutive year, the German national championship, Australian championships and NSW championships, and for her outstanding sportsmanship.

Seamus Byrt (Keppel Bay Sailing Club) is nominated for his extensive volunteer work as a club Assistant Instructor for the Tackers program, his commitment to attending weekly training sessions and his participation in the Sabot class.

Youth Sailor of the Year

Nominations for the Barrenjoey Trophy for the Youth Sailor of the Year have been received for four sailors. This trophy is awarded to a skipper or skipper and crew aged 15 to 19 years old for their outstanding performance at club, state and/or national events.

Carissa Bridge (Royal Queensland Yacht Squadron and Queensland Laser Association) is nominated for her outstanding results in the Laser Radial class, for being selected to represent Australia at the Pacific Games and for selection to the Australian Sailing Team’s Development Program.

Blake Newton (Keppel Bay Sailing Club) is nominated for his results in the Impulse Australian Championship, winning the Junior Trophy and finishing 22nd in the open fleet. He is also nominated for his instructing work for his club’s Tackers program and for promotion of sailing within the broader community.

Daniel Self (Royal Queensland Yacht Squadron and Queensland Laser Association) is nominated for his Laser class performances including first in the Queensland Championship and fourth in the QLD Week regatta, and for his volunteer representation of youth as a member of the Yachting Queensland board.

Elizabeth McNeil (Brisbane Sailing Squadron) is nominated for her contribution to sailing as an Assistant Instructor and as crew for the highly successful 125 team skipped by Luke Johnson which resoundingly won both the state title and the national championship.

Offshore Sailor of the Year

Mark Vickers (Townsville Yacht Club) is nominated for the Wistari Trophy which recognises the contribution of an owner or skipper of a yacht that has excelled in a Blue Water event or series, trailer sailor event or series. Vickers has made many significant and often successful contributions to offshore racing including re-establishing the Townsville to Orpheus Island Offshore Race.

Coach of the Year

There are two nominations for the new award of Coach of the Year which recognises continuous and consistent great attitude and a high standard of work toward the coaching role.

Danny Fuller (Townsville Sailing Club) is nominated for his dedication and assistance to many young sailors across northern Queensland, increasing their love of sailing through improving their skills and knowledge.

Klade Hauschildt (Noosa Yacht & Rowing Club) is nominated for his extensive contribution to coaching of youth in various classes in addition to coaching sailing to physically and intellectually disabled people. .

Instructor of the Year

One nomination has been received for the new award which recognises an instructor that has continuously and consistently displayed great attitude and a high standard of work.

Ashley Stephens (Darling Point Sailing Squadron) is nominated for his good work ethic, methodology and interpersonal skills, along with his willingness to mentor and role model others helping them to build their confidence and skills.

Official of the Year

Four nominations for the new award of Official of the Year have been received. This award recognises the delivery of a high work standard, a constant positive attitude and contributing to the community above and beyond what is normally expected.

Louise Davis (Royal Queensland Yacht Squadron) is nominated for her active participation in her club’s racing and officials training, for her roles as PRO and RO at a number of national events and for her ‘no job too great, nor too small’ attitude.

Alan Carlisle (Royal Queensland Yacht Squadron and Humpy Bong Yacht Club) is nominated for his countless hours of volunteer contribution to Race Officer training and education, taking responsibility for the development, mentoring and high-standard outcomes for many race officers, umpires and judges.

Mark Vickers (Townsville Yacht Club) is nominated for his selfless contribution to his club’s sailing committee and as club handicapper and PRO. He is held in high regard by the club’s members who appreciate his willingness to share his knowledge.

Christine Reid (Brisbane 18ft Sailing Club) has since 1980 taken on many important club roles, from Rear Commodore and Club Captain to newsletter writer and publisher, event organiser and race day BBQ manager and cook; all completed with dedication to the class and to its participants.

Five nominations have been made for the Solo Trophy.

Daryl Skinner (Keppel Bay Sailing Club) is nominated for his extensive services to the club in all areas of sailing and for his continuing support of and participation in the Arrow class.

Paul Florian (Keppel Bay Sailing Club) is nominated for his contribution to the club in many club management and training roles along with his race management commitments.

Mark Vickers (Townsville Yacht Club) is nominated for his continuing contribution to all aspects of the running of the club, both on and off the water including acting as the club’s PRO for the last four years. He is selfless in his work in sharing his sailing knowledge among the local community.

Stephen Geck (Brisbane Sailing Squadron and the Queensland 125 Association) is nominated for his dedication to the club over several decades, running Junior sailing classes and taking on management roles including Commodore.

Paul Blundell (Noosa Yacht & Rowing Club) is nominated for his work in growing his club’s Youthsail program to be largest in Australia engaging 200 local school students weekly, for his work in establishing and running Queensland’s first Tackers program and the Buoyed Up Indigenous Program, and his contribution to the running of sailing events and mentoring youth programs at other Queensland clubs.

Club of the Year

Two nominations have been received for this new award which recognises excellence in the areas of membership, promotion, improvements and Discover Sailing.

Mooloolaba Yacht Club is nominated for its leadership in being innovative in its adult and youth sailing programs and in its marketing, in being responsive to its changing commercial and community needs, and for the development of a sustainable operational model.

Noosa Yacht & Rowing Club is nominated for its outstanding work in engaging and retaining juniors and youth in sailing, in developing its Tackers Program and Buoyed Up Indigenous Program, in promoting sailing across the broader community, in developing pathways for program participants towards instructing and work-place training and in hosting various dinghy races and regattas.

The winners of each of the ten awards categories will be announced at Yachting Queensland on Friday September 18th.